This is based upon several ideas that were put forth by the comments of   Brutorz Bill.  The nature of Crypts & Things allows it too be used with a number of rpg genres. Since I got the pdf several months ago I've run the system with a few players of an At The Earth's Core setting. Bill recently on this blog & another suggested running the game system with both Carcosa & perhaps the Planet Alogl setting.  Here Given the strength of the Carcosa book itself & its organization of the material. I'd personally say that it would be relatively easy to run!
The setting with its weird gods, space aliens, & arcane science could easily fit the Crypts & Things system. There's more to then that.
The Crypts & Things system especially its monsters & magic items could compliment the details that need to be filled in by a Dungeon Master. The divided magic system would easily make the sanity shattering rituals of Carcosa a prime choose for role playing opportunities.
The Lovecraftian monsters are very detailed in Crypts & Things allowing for some awesome back story if the Dungeon Master wants to fill things in more..
Carcosa itself could offer the Dungeon Master a working psionic system that actually works! Given the forbidden sciences of the Snakemen there is very much a place where all of this can work. Crypts & Things might provide the perfect framework for players to explore the setting more fully.

The stuff I've already blogged about might be able to be run without any fuss easily.
This just might be the tip of the ice berg though. The system could be used to simulate & expand any number of science fantasy sequences.

Who knows what strange lands hover in the astral spaces of eldrith horror in the skies of Carcosa? Each & every time I read about the Space Aliens in the setting  of Carcosa I keep getting the impression that these things are closer to Deviants & Eternals from Jack Kirby. Then the Greys of UFOlogy . Yet why limit one's self with simply greys, etc. There might be pockets of more then a few types of aliens operating across the face of Carcosa or whatever setting your using. 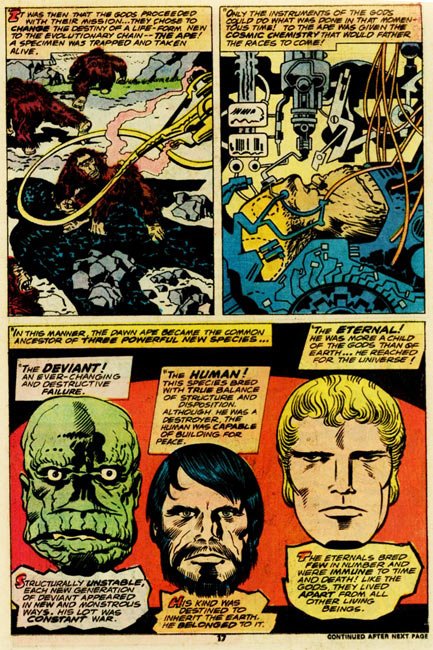 However given my particular bent of many things inner space. Since I've run a couple of sessions of AT The Earth's Core using Crypts & Things.  I reminded of the Shaver Mystery more. Given the megadugeons of madness that I've been creating lately for my At The Earth's Core campaign. The Atlans & Derro from the Shaver mysteries would seem a more solid fit then the copyrighted Eternals & Deviants of Marvel fame.
More information about the Shaver Mystery can be found Here
I'm amazed that everything I've been blogging about has taken me full circle yet again. Inner & Outer Space can be used for fodder for both Carcosa as well as Crypts & Things. These two just might be my go too system for awhile. 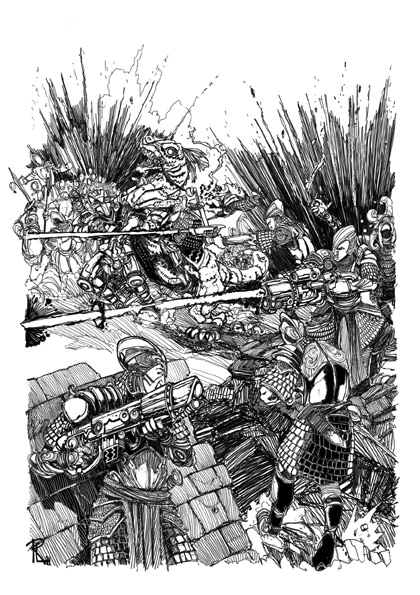 This illustration from Carcosa screams Moorcock to me. I want to write the adventure behind the action in this.
Posted by Needles at 12:02 AM