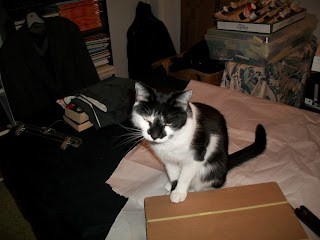 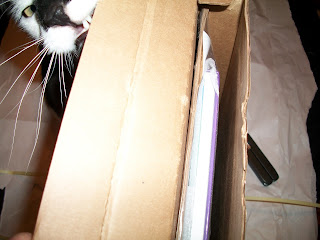 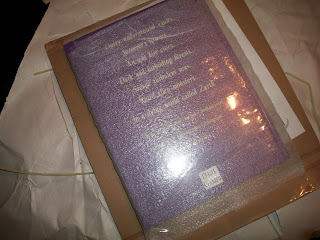 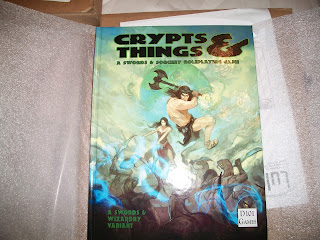 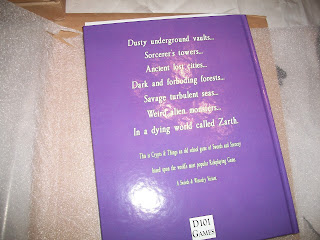 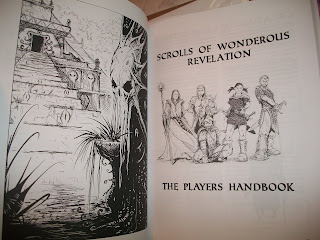 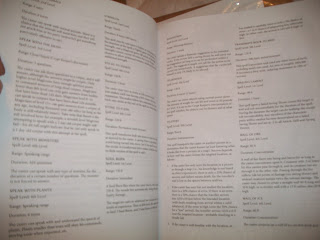 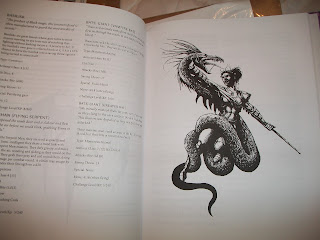 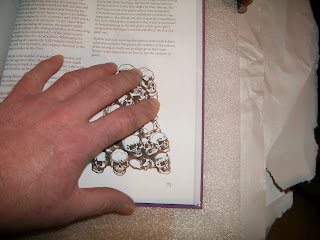 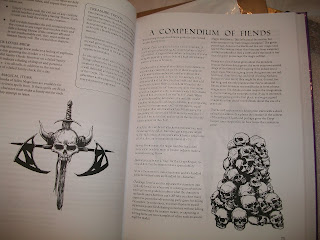 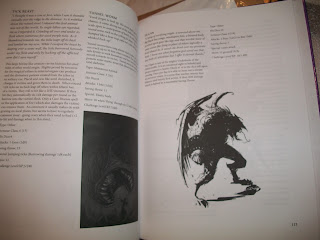 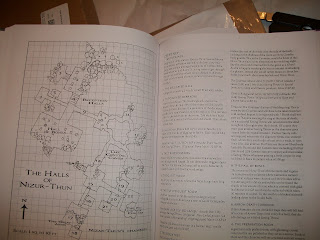 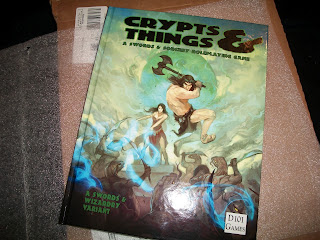 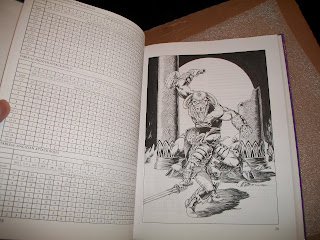 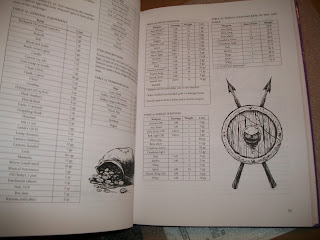 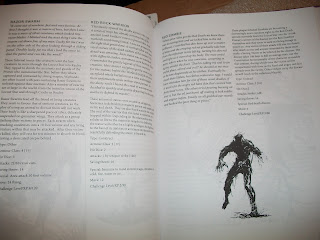 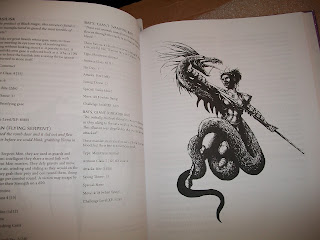 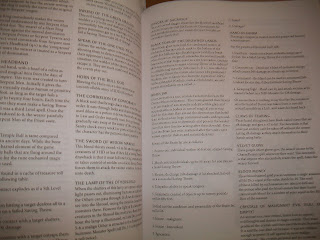 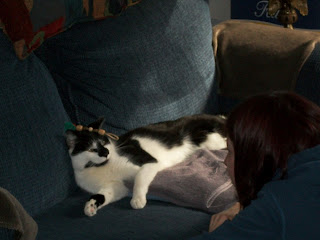 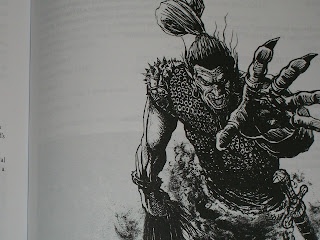 I've had Crypts & Things less then 24 hours.  The game has a Marvel '70s Conan about it. My cat Trouble decided to help with the unpacking of the book!
The Psychical  Book
The book is a very nice looking with a wrap around cover. The text is easy to read & the type nicely set. There is a nice index is very nicely done. All in all it looks pretty good for the dollar value.
The artwork  is evocative a certain amount of nostalgia on my part for magazines like early 80s White Dwarf & Dragon magazines.
The Game System

Creating a character
The game system uses Swords & Wizardry as its basis but even if you do own Swords & Wizardry there are vast differences between the 2 systems. There are no fantasy races at all. No elves, dwarves, etc. Instead we get more expansions for fighters, a grittier wizard, expanded thieves, & a cleric class has been folded into the magic user.
How to play
The game is quick simple, easy to play, & it expands into a real solid framework.  Each character chooses traits which help to define them as individuals not simply cookie cutter characters out for the night's game slaughter. However the combat system is fast & vicious. It reflexes a system of combat where the melee weapon provides might is right.
Spell lists
The magic spells from the cleric school & wizard schools have been divided into gray, black, & white. These spells are the type of thing seen with the pages of Sword & Sorcery novel in the 70s. Magic costs sanity. The rules here give the magic a price & Faustian feel. A mix of Lovecraft, Howard, with a touch of the classic mythology.
The Book of Doom (A Crypt Keeper’s Guide) The Book of Doom is very much in the old school tradition. Its sort of something that one would see in the world's most popular role playing game. Its all meat without the filler seen in many of the games that appeared in the 90s & 00s.
The Continent of Terror  – Gazetteer of the setting.  This section defines the world of Crypts & Things a place that one would find in the pages of a lurid 70s Swords & Sorcery paperback. The world is very loose. There's lots of room to open things up for the Dungeon Master!
Ill Gotten gains of Dark Desire – Treasure and magic items.  The Dungeon Master of a Swords & Sorcery game is going to be pleasantly surprised. These magic items aren't the sort of things that one hands out to players. These are the hard won sanity shattering affairs of old. These item will do the job that one wants but they have a black side which can leave the bodies of the adventurers in a heap.
A compendium of Fiends – Monsters -  Monsters are cut from the classic cloth of Lovecraft .The first AD&D book I ever owned was the Monster Manual. I've judged games by wether or not a monster section makes me want to run a game. This book has monsters that make me want to run the game!
The Hall of Nizun Thun – A mini-crypt (adventure) -  The basic adventure is very much in the old school mold. A very dangerous dungeon crawl with some very interesting highlights that  compliment the world of Crypts & Things . This for me was one of the best adventures I've seen. I want to run  this now
Appendices A to M: Notes from the Abyss  This section of the book shines! You get lots of little things that allow one to craft a Howardian style game in no time flat, there are bits of no non sense advice, & look into the genre, & more bits as well as pieces that give the flavor of Crypts & Things.

Conclusion
Is this a perfect game? No but its pretty damn close for the type of low powered high flavored Swords & Sorcery games that I love from the pages of those by gone authors of yore.


This game is cross convertible with most retroclones with little work other then moving the armor class here or there. One could with a bit of "work" use this with regular Swords & Wizardry, Labyrinth Lord, etc. However the authors voice is very unique in the world of  OSR role playing games. I want to thank my other half Joey for getting me the book & listing me at the Conqueror King Level so that you'll be seeing my name in this book. I personally think its worth getting in the hardback format! An excellent book by Newt New Port. The game is available right Here
Posted by Needles at 5:28 PM