Crypts & Things is being sent to my door step & I've been contacted by my friend Larry to get the ball rolling on a campaign. Have to come up with new campaign for Saturday or Sunday game one of my friend Larry's players is going in for an emergency gall bladder operation.I got volunteered. So now the idea I've had brewing is going to be pushed up to fruition .. like yesterday. Quietly begins looking into Ancient Vaults blog real quick.. Hmm there just might be a way to benefit from this.
The idea of using one of my favorite setting is very tempting.
At The Earth's Core by Edgar Rice Burroughs plot by way of wiki goes :

David is a mining heir who finances the experimental "iron mole," an excavating vehicle designed by his elderly inventor friend Abner Perry. In a test run, they discover the vehicle cannot be turned, and it burrows 500 miles into the Earth's crust, emerging into the unknown interior world of Pellucidar. In Burroughs' concept, the Earth is a hollow shell with Pellucidar as the internal surface of that shell.
Pellucidar is inhabited by prehistoric creatures of all geological eras, and dominated by the Mahars, a species of flying reptile both intelligent and civilized, but which enslaves and preys on the local stone-age humans. Innes and Perry are captured by the Mahars' ape-like Sagoth servants and taken with other human captives to the chief Mahar city of Phutra. Among their fellow captives are the brave Ghak, the Hairy One, from the country of Sari, the shifty Hooja the Sly One and the lovely Dian the Beautiful of Amoz.
David, attracted to Dian, defends her against the unwanted attentions of Hooja, but due to his ignorance of local customs she assumes he wants her as a slave, not a friend or lover, and subsequently snubs him. Only later, after Hooja slips their captors in a dark tunnel and forces Dian to leave with him, does David learn from Ghak the cause of the misunderstanding.

a later printing of At the Earth's Core
In Phutra the captives become slaves, and the two surface worlders learn more of Pellucidar and Mahar society. The Mahars are all female, reproducing parthogenetically by means of a closely guarded "Great Secret" contained in a Mahar book. David learns that they also feast on selected human captives in a secret ritual. In a disturbance, David manages to escape Phutra, becomes lost, and experiences a number of adventures before sneaking back into the city. Rejoining Abner, he finds the latter did not even realize he was gone, and the two discover that time in Pellucidar, in the absence of objective means to measure it, is a subjective thing, experienced by different people at different rates.
Obsessed with righting the wrong he has unwittingly done Dian, David escapes again and eventually finds and wins her by defeating the malevolent Jubal the Ugly One, another unwanted suitor. David makes amends, and he and Dian wed.
Later, along with Ghak and other allies, David and Abner lead a revolt of humankind against the Mahars. Their foes are hampered by the loss of the Great Secret, which David has stolen and hidden. To further the struggle David returns to the Iron Mole, in which he and Dian propose to travel back to the surface world to procure outer world technology. Only after it is underway does he discover that Hooja has substituted a drugged Mahar for Dian. The creature attacks David but is overcome, and the return to the surface world proceeds successfully.
Back in the world we know David meets the author, who after hearing his tale and seeing his prehistoric captive, helps him resupply and prepare the mole for the return to Pellucidar. Yeah looking through Crypts & Things there's no shortage of Lovecraftian monsters in the setting after all there's lots of things there to mine for a game setting but I don't really have the time to get maps & such together.

So I'm going to "Cheat"! In this case cheat means grabbing some of the At The Earth's Core Vibe that seems all of the rage with my players & such.
There's a wee problem with Crypts & Things though. The magic items are soul wrecking horrors from beyond the sphere of space & time. The answer is to plunder a resource that has loads of stuff already statted out for Swords & Wizardry. One of the strengths of the Wizardry games is its ability to be modular! There's something you like plug & play! Crypts & Things is built on this same frame work! So is


Ancient Vaults & Eldritch Secrets blog to the rescue.  You can find that blog Here With Edgar Rice Burroughs being all of the rage at the moment one would think that his best work has been brought to the screen? Wrong his best work is an inner Earth series of novels that gives a glimpse of a world where prehistoric Earth is alive well & still on going.

The appendix "N" for this style of campaign is perhaps one of the best thought out because basically all of the hard work has been done. The Edgar Rice Burroughs Magazine covers every topic about the world of Pellucidar. But I can hear the nashing of teeth & wailing of fists in the air now. Crypts & Things is built for Conan by Crom!


Are you serious??! There's already so much prehistoric stuff lurking around the edges of Howard that one would be hard pressed not to use some of it. "Red Nails" comes to mind.

There is the 70s movie of  At The Earth's Core with Doug McCloure & I might use some of it.
The biggest influence on this campaign is the movie Fire and Ice is a 1983 animated film, a collaboration between Ralph Bakshi and Frank Frazetta, distributed by 20th Century Fox

The plot goes something like this :
From their stronghold in Icepeak, the evil Queen Juliana (Susan Tyrrell) and her son, Nekron (Stephen Mendel), send forth a wave of glaciers, forcing humanity to retreat south towards theequator. Nekron sends a delegation to King Jarol in Firekeep to request his surrender, but this is a ruse orchestrated by Queen Juliana for Nekron’s sub-humans to kidnap Jarol’s (Leo Gordon) daughter, the barefoot, microkini-wearing Princess Teegra (Cynthia Leake); Queen Juliana feels that Nekron should take a bride to produce an heir. But Teegra makes an escape and comes upon Larn, the only survivor of a village razed by glaciers, who offers to escort her back to Firekeep. As Teegra is recaptured, Larn teams with the mysterious Darkwolf (Steve Sandor) to save Teegra and then travel to Icepeak to stop Juliana. Darkwolf faces Nekron and kills him as Icepeak succumbs to lava released by King Jarol and is destroyed. The film finishes with Larn about to kill a beaten sub-human until Teegra stops him saying that "it's over" and embraces him. Darkwolf is seen atop a cliff; he watches the pair, smiles and then disappears. Teegra and Larn kiss as the credits roll.

Fire & Ice could take place in the Inner World with very little effort! There's tons to use & pull from this movie. From Slursaurs (I'll be covering these later) to Dragon Hawks. The semi tropical world is great! The perfect foil for your characters! Seriously the movie is one running guided tour of the world. The screenplay was written by Gerry Conway and Roy Thomas, both of whom had writtenConan stories for Marvel Comics. Background painter was James Gurney, the author and artist of the famous Dinotopia illustrated novels. Thomas Kinkade also worked on the backgrounds to various scenes. Because of this its action on top of action with very little breathing room for logic. Just the way an old school D&D game should be. Crypts & Things does this especially well. 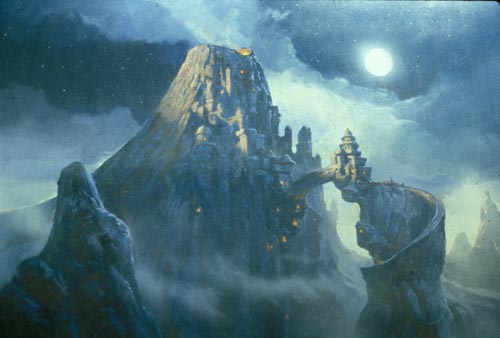 King Jarol lives in  Firekeep. The place needs to be on the side of some one's van in 1970 something. Look at that place a fortess cut into the side of a volcano how bad ass is that!? 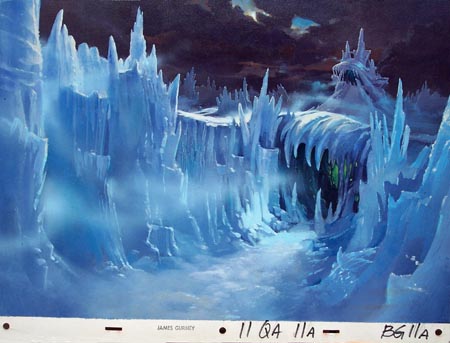 The semi humanoids of Fire & Ice would feel right at home in Pecullidar. Necron's depiction of his powers are exactly how I imagined that psionics would work in D&D. These are a couple of the sources I'm pulling on for this game on Saturday!
There are 10 things that I'll be pulling into this set on Saturday :