The Phantom From 10,000 Leagues is an awful movie & in fact horrible. But its one of those so bad its good films.
Plot :
The movie begins when a fisherman is killed by a mysterious monster. Two government agents later find the body on the beach. One of the agents, Ted, tries to get a sample of a radio-active rock in the sea, but the same monster attacks him. Ted is able to escape and return to the beach. On a later trip with the other agent, the monster nearly kills Ted, but the other agent is able to shoot it with a spear gun. Ted discovers that Dr. King, a marine biologist, created the monster and the radioactive rock. Ted tells Dr. King how the monster is killing innocent people and that it must be stopped. After Dr. King destroys his lab he goes to kill his creation using dynamite. Shortly before detonation, the monster grabs him. The dynamite explodes, destroying the rock and killing the monster and Dr. King. Ted arrives just in time to witness the explosion.
The real star of the movie is the 'phantom' an 8 foot tall radioactive ball of underwater  nastiness that has an attitude a mile wide. No Enc: 1d4
Alignment : Chaotic
Intelligence: Low
Move:90'/280'
Armor Class: 4
Hit Dice: 3
Attacks:2 claws
Damage 1d4/1d4 plus radioactive burns
Save:F3
Morale :8 especially around the Radioactive Rock It Guards
Hoard Class: X From Boats & Such That It wrecks
Mutations: Radioactive Emissions, Energy Retaining Cell Structure
The how & why of this mutant monster is never explained beyond it being 8 foot tall capable of ripping anyone who comes in contact very little is known about. The creature might be a Deep One survivor, an animal mutation, or a Derro spawned monster left on the sea floor. What is know is that the creature draws sustenance  from the glow of a strange radioactive rock. Anyone who comes within 40" of the rock will cause the creature to berserk. Anyone suffering melee with this creature will be subject to horrible radiation burns.
These monsters are reported to have been signed after the Great Cataclysm. It is reported that there are thousands of these monsters along the ruined coast of Lost Angles & Lost Mexico

Dr. Ted Stevens aka Ted Baxter
4th level smarmy scientist
Dr. Stevens actually created a mutant or two of his own. This black ops scientist is real reason that we've got a monster in the first place yet he gets the girl. Who knows what other secrets are hiding in his closet? 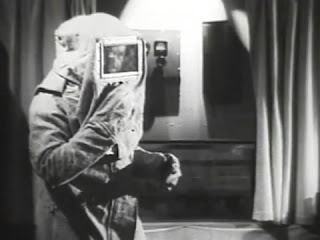 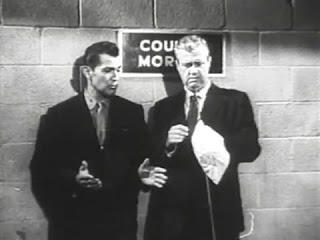 William S. 'Bill' Grant  3rd level government agent
Grant would later on go on to play a key role position during the 70s Vietnam teleportation experiments & it after effects

This one is a personal favorite of mine! The plot of this movie is as follows :
The movie starts with Hank and his immature girlfriend, Tina, driving in a car to the beach with a gang of motorcyclists. Tina is drinking alcohol, Hank tells Tina To lay off the alcohol, but Tina says she's going to have a great cocktail. Hank says he's not going to carry her everywhere like a servant. Tina gets mad and says she never needed him. Hank says that he has matured from being a "campus big shot who'd do anything for kicks." She wants to prove to him she can live better in her own way. Meanwhile, a boat dumps toxic waste into the ocean, which lands on a sunken ship with a skull of a dead sailor, which transforms slowly into a half human, half fish-like monster. The monster then proceeds to make its way to the surface.
Meanwhile, a party is going on at the beach with music played live by "The Del-Aires". The party catches the attention of a motorcycle gang. Tina starts flirting with the leader, Mike. After some dancing, Tina begins stripping. Hank, who was just staring out at the ocean, talks with Elaine. He tells her about Tina, and Elaine says she is sure that Tina will understand him eventually. Noticing the commotion at the beach, Hank and Elaine decide to check. Hank, angry at Tina, tries to take her away, but Mike starts a fight with him. Hank wins, and Mike accepts his defeat. Tina tries to apologize to Hank, but he leaves. Mike is then taken home by his gang. Tina then decides to go for a swim. She swims all the way out to some rocks far away from the beach. She is attacked and killed by the monster. The sight of her body causes commotion on the beach.
Later, Elaine has been worried about Hank since Tina's death. Her father, Dr. Gavin, tells her not to worry about him. Eulabelle, Dr. Gavin's housekeeper, suggests that some kind of voodoo is responsible for Tina's death. Gavin refuses to believe it. Later that night, Elaine cancels going to a slumber party with her friends. The monsters, whose number have increased, along with the inclusion of a new kind of monster which seems to be more plant-like than fish-like, attack the slumber party and kill most of the girls. This news spreads quickly. Three traveling girls make their way through the town while traveling to New York. They get a flat tire while going past Fingel's Quarry. While attempting to fix the tire, they are killed by the monsters.
Elaine is later seen depressed by the news of these murders. Hank comes by to pick her up for a date and decides to go to the beach. He has a short chat with the Del-Aires, who tell him that there has been no action since Tina was killed. The band sings "Summer Love."
Meanwhile, two girls wait for someone to pick them up. A monster stalks them as they walk along. The girls are finally picked up, and the monster gets angry. The monster then walks along the street, and it notices a clothing store with female mannequins on display. The monster punches through the glass in an attempt to attack them, but its arm is ripped off by the sharp edges. The arm is later studied by Dr. Gavin and Hank. The arm is still alive, and they can't figure out how to kill it. They then hear some noises upstairs. Thinking it's one of the monsters, they prepare to defend themselves, but it turns out to be Eulabelle. She notices the monster arm and is startled by it, accidentally spilling a container of sodium on it, which kills the arm. A way to kill the monsters has been found. Meanwhile, a drunk is killed by another monster, the only male victim shown.
Since the discovery of the monsters' weakness, a way to locate the monsters is searched for. After discovering that the monsters leave radioactive water wherever they go, which allows scanning for them to track them, Dr. Gavin finally tells Hank to get sodium. Hank cannot find anyone who supplies sodium, but Eulabelle suggests he try the last few places in the phone book. Hank finds a place that has it and goes to New York to get it. Meanwhile, Dr. Gavin has no luck in finding the monsters. Eulabelle tells him that Hank went to get the sodium, and Elaine went to look for the monsters at Fingel's Quarry. Dr. Gavin realizes that it's where the monsters must be, and he rushes off to help Elaine, bringing a small case of sodium with him. Elaine tests the water for radioactivity, and the monsters chase her. She trips between two rocks and injures her leg, but she still tries to run away.
Dr. Gavin arrives and throws sodium at the monster attacking Elaine, which kills it. Another monster attacks. Since he used his sodium, he attempts to defend his daughter himself. Hank, who is bringing more sodium, is stopped by a cop, who leads him to Fingel's Quarry. Hank saves Dr. Gavin by killing the monster attacking him, but Gavin is burned. The group then kills all the monsters. Later, Hank visits Elaine, whose leg is recovering. They kiss while music by the Del-Aires plays on the radio.
The Connecticut Connection!
Unlike the beach party movies filmed up to that time, this film was shot in black & white and on the Atlantic coast. Produced in Stamford, Connecticut, the beach scenes were filmed in an area of town called Shippan Point.
The biker gang in the film was played by The Charter Oaks Motorcycle Club of Riverside, Connecticut.

The Horror Of The Beach Party Number enc: 3d6
Alignment : Chaotic
Movement: 100'
Armor class: 7
Hit Dice:5
Attacks : 1 claw
Damage: 2d6
Save : L3
Morale :8
Hoard Class : X
These horrors are part mutant part undead horror. They can be turned by clerics if they figure what these things are. Since these creatures have an aversion to the essential salt sodium which causes a catastrophic reaction within the creature's chemistry. They are found within the millions as servants of the Deep Ones on the Lost Atlantic Coast.
New Rite : Creation of Deep Horrors
Level : 4
Casting Time : 2 Rounds
Range: 40'
Duration:  permanent
Area Of Effect : See Below
Saving Throw : No
The caster needs a barrel of consecrated toxic waste, the user casts the barrel into a part of the ocean where a great catastrophic of violence has taken place. Within 1d4 rounds the process begins to create the undead mutant horrors from beyond. The essential salts of the ocean begin to form the  fishlike  flesh of these things. 1d6 of these creatures will be created within a 40" area. The caster must make a successful Charisma roll to command the horrors or there is a 30% chance of them breaking free of the control of the caster. They will  run amok after killing him of course. The toxic waste will be consumed during the casting of this spell & another must be found & the rites of consecration cast on it. Sodium will of course undue the effects of this spell's creation. A fact not widely known outside of the forbidden black arts