There was a time when I talked extensively about the classic Pulps on this blog & so here we go back down the Apendix S material. Ages ago it used to be hard to get a hold of classic Pulp goodness. And this blog post is going to follow up on this one from back in 2017 here.  And of course there's a reason for this which is I had a gamer at my table talk about the fact that it's hard within his mind to justify using OSR games such as Warriors of the Red Planet with intergalatic rpg's  such as Colonial Troopers or even Cepheus Engine. And here's where Science Fiction Adventure Classics (1969 Ultimate) Pulp Mar 1974 indeed actually comes in handy. 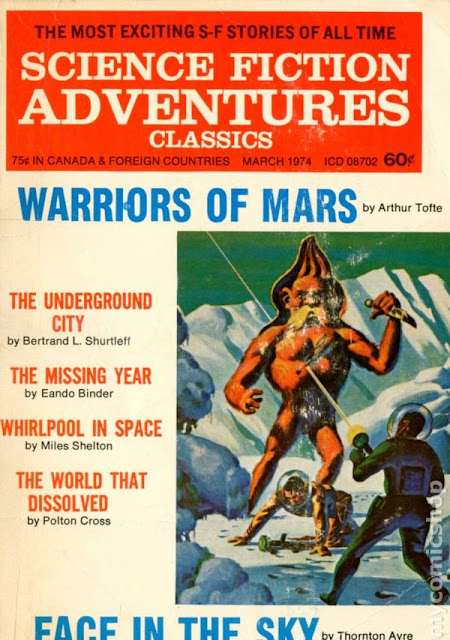 Reprints such as Science Fiction Adventure Classics (1969 Ultimate) Pulp Mar 1974  brought home some of the best of the Pulp classic stories without the reader having to haunt second hand book shops all over Ameria & Europe. But it also brought home another little fact Edgar Rice Burrough's Mars was being colonized! Just look at the contents of this issue taken straight from the Mycomicshop entry:
March 1974. Science fiction stories: "Warriors of Other Worlds" by Morris J. Steele, "Warriors of Mars" by Arthur Tofte, "The Underground City" by Bertrand L. Shurtleff, "The Missing Year" by Eando Binder, "Whirlpool in Space" by Miles Shelton, "The World That Dissolved" by Polton Cross, "Face in the Sky" by Thornton Ayre, and "Sydney, the Screwloose Robot" by William P. McGivern. 5.25-in. x 7.5-in.; black and white; 128 newsprint pages. Cover price $0.60. 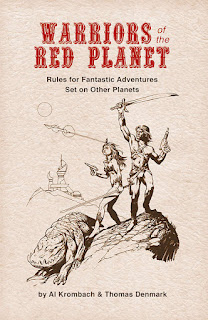 Yeah, Sixty cents went a lot further back in March of '74 but its the fact that ERB's Mars was seeing explorers and colonizers. Leigh Brackett made a career out of the colonized solar system with some dam fine writing.
The fact is that Mars became another destination in the solar system. And in today's gaming another PC racial option. Mars was seen as a relic of the past of Science Fiction. But its comeback into vogue lately because of the old school & the OSR.
But Mars remains both a point on the map of our solar system & a destination for adventure. The Science Fiction authors of yore used it a point for an adventure jump off. There are hundreds of Pulp stories where the Martian royal or outlaw is the victim or the villain. And the fact is that Science Fiction moved on. But they didn't lose sight of where they came from.
Mars is point for our players to draw their PC's from and an anchor for which our party of adventurers can draw campaign adventures on.
One of the OSR titles that we've used to draw various cycles of races rising & falling on Mars has been Dead Names by Kevin Crawford. 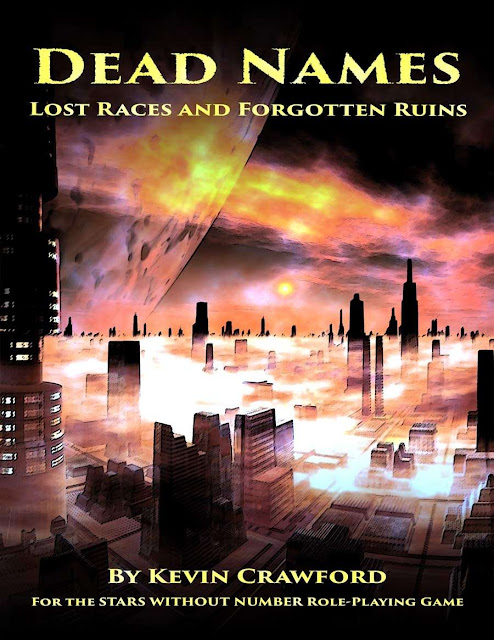 Dead Names clicks right into the vibe of "The Underground City" by Bertrand L. Shurtleff, and we see the migration of the weird lost worlds of the Pulps migrating to the stars as time went on. Whirlpool in Space" by Miles Shelton, picks up on an interstellar phenomna that could be used with Cepheus Engine easily. "The World That Dissolved" by Polton Cross, could be a fodder for an alternative Earth adventure or as a point for a space game as an alien colony world. "Face in the Sky" by Thornton Ayre, is a possible Lovecraftian diety or a random NPC encounter for an old school or OSR game. "Sydney, the Screwloose Robot" by William P. McGivern might make an excellent  NPC.

You can download Science Fiction Adventure Classics (1969 Ultimate) Pulp Mar 1974 Here
Posted by Needles at 10:19 AM