Role Aids were the unofficial add on books & supplements for Advanced Dungeons & Dragons first edition. A personal favorite of mine was Giants (Role Aids) by Bruce Humphrey  which was published in 1990. And the reason why its a favorite of mine is that Giants (Role Aids) gave a consistent history, culture, background, & even adventures for their giants.All of this was framed for the giant's themed campaign setting. Now according to the Role Aids product line; "Giants was written by Bruce Humphrey, with art by Ray Rubin, and was published by Mayfair Games in 1997 as a 96-page book '. 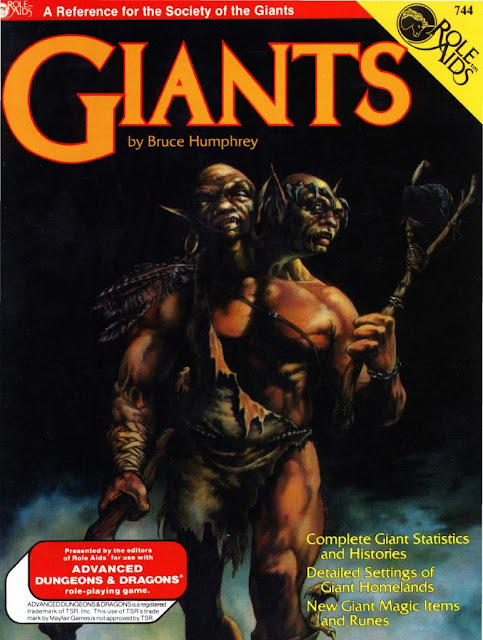 There was an implied campaign setting that worked into it an almost but not quite Puesdo Biblical or Greek mythological beginning for the giants starting with the Titans & then working down through the ranks & types of giants. The Giants book was successful enough to inspire a Grenadier miniatures line. 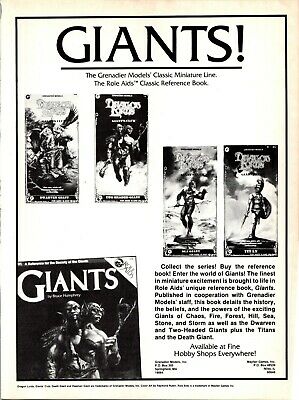 This add originally appeared in The Dragon magazine and Giants was inspiring to a lot of people. But the truth is that by 1990 the writing was on the wall for Mayfair games. The company was already in finicial  trouble with when the lawsuit from TSR came down the pike. Giants falls right into this slot and it shows.
Giants takes the idea of the Role Aids line & expands it; "Giants is a supplement describing 12 types of giants in detail: their homes, histories, spells, magic items, pets, and allies. With five new types of giants: chaos, dwarven, forest, sea, and death. It also includes rules for giants as player characters and a campaign-setting description of Clanfast, a giants' city. " There are ton of ides within  Giants (Role Aids) by Bruce Humphrey that can easily be transcribed to the table top level. The type is easy to read, the ideas here well defined, & the material easily convertable over to old school or OSR games.
Beause of the easy going nature of  Bruce Humphrey its easy to get lost in the over all plot of giants & everything seems the better suited for an old school Sword & Sorcery game then an over the top Tolkein romp such as :'Lord of the Rings'.

So is Giants worth the price of admission?! In a word yes. The Role Aids line book are so far outta of the loop of common gamer knowledge. So this makes Giants a perfect fodder for a mid to higher level campaign setting. The PC's are going to have their hands full dealing with the variety of giants & the monsters are very capable of ruining the days of a mid teir group of adventurers.
Posted by Needles at 11:23 PM