" At the outer edges of Hyperborea on small isle not more then one mile long the cold seas lap at the shores of a ruined tower. The tower alights with unholy sorcerous light and the baying of hounds can be heard ringing across the sea.
Suddenly the skies fill with the figures of dead gods & strange riders as well as Hell hounds! The clouds ar split by lightning and thunders as the clash of hoof beats sounds across the sky! The Wild Hunt has come to the shores of Hyperborea. Winds, snow, rain, and the clouds themselves part against the hoof beats of the  dead  gods lead by the horned vistage of the Hunter! " 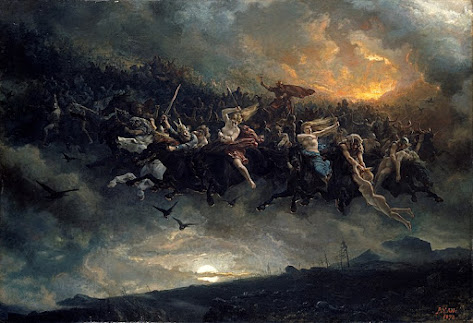 Asgårdsreien [The Wild Hunt of Odin] (1872) by Peter Nicolai Arbo

As soon as the handler spots a PC who is likely to make a good target for the hunt then it will blow its enchanted horn & call the wraith of the hunt down on a doomed soul. In actuality the wild hunt is on the prowl of Hyperborea for a daemon prince who has possessed the body of a local duke who is about too plunge this side of Hyperborea into a war! The hunt has come to take the daemon prince back to underborea's cold Hells to answer to answer to  Thaumagorga himself. Thaumagorga is angry that the renagade Class VI greater dæmon lord has taken it upon himself to escalate war upon Hyperborea before its appointed time. More over the Wild Hunt is made up of the dead souls of the old gods. 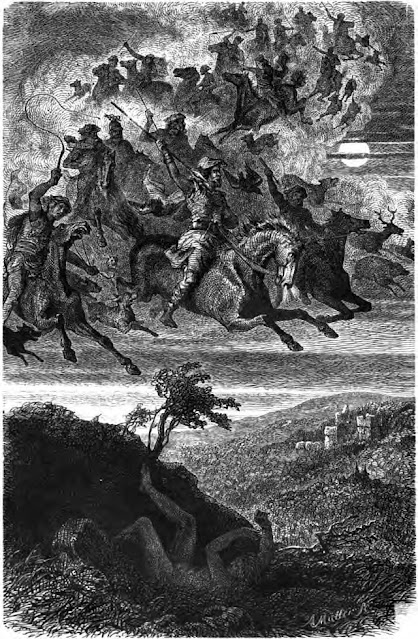 The wraith of  Thaumagorga himself is something to behold as the hunt has taken on its most daemonic & Hellish aspects. The dead gods may remember their ancient incarnations  & avitors if a druid, cleric, or bard recalls the ancient Keltic legends. Any of these classes can make an offering to the Wild Hunt & entreat them with offerings. If these offerings are accepted is another story entirely. They may accept it or by pass the PC's.

Kadam The Bold is a 8th level fighter whose been gaining favor with the Hyperborean court winning success after success on the battle field & unbalancing the power struture of the world. The moldering & decaying gods have come for Kadam's soul! This was after a high ranking Ixian black wizard bound the daemon prince to the duke. The wild hunt is taking advantage of the operation to take any evil souls back to the underworld. Should the party help the Wild Hunt they may be 'rewarded'.  They will be awarded money, gold or, most often, a leg of a slain animal or human, which is often cursed in a way that makes it impossible to be rid of it. Only a high ranking Druid or Priest can remove the cursed item or treasure.

The party must ask the Wild Hunt for salt which they can not provide while standing in the middle of their path. The Hunt is then bound to take the cursed item back while blessing the party.

Before the hill's high altar bowed,
The trees are Druids, weird and white,
Facing the vision of the light
With ancient lips to silence vowed.

No certain sound the woods aver,
Nor motion save of formless wings—
Filled with phantasmal flutterings,
With thronging gloom and shadow-stir.

Unseen, unheard, amid the dell
Lie all the winds that mantic trees
Have lulled with crystal warlockries
And bound about with Merlin-spell.
Twilight on the Snow  (1922) by Clark Ashton Smith