Professor Moriarty From The Bravestarr Cartoon For The Cepheus Engine Rpg

Professor Moriarty followed his archnemisis Sherlock Holmes into the 23rd century through one of mad science devices. The professor is over three hundred & fifty years old but this has not diminished his evil ways. His mangement skills at manipulating the criminial underworld has not changed nor has his propensity for mad science! Professor Moriarty was foiled by the combination of  Sheriff Bravestarr & Sherlock Holmes as well as his compatroits. Professor Moriarty has not served a day in prison after almost trying to take over the Earth  using a dangerous alien life form's hypnotic  psionic ability. 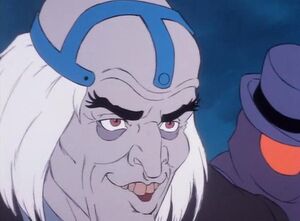 Professor Moriarty eventually gets his hands on the Tiber time crystal which is able to open doorways in time & space. He & his robotic henchmen could show up anywhere. Professor Moriarty is often behind the scenes of many criminal elements across the galaxy & able to expand his power base where & when he wants. Many alien gangs of criminials & outlaws trace their funding back to Professor Moriarty.
Note that Professor Moriarty will have 1d6 security robot body guards with him. These will be armed with a laser pisol & one bot will have a non lethal stunning device or weapon on them.