Here comes  the free  issue #009 of the Cepheus Journal For the Cepheus Engine Rpg family of games. The Cepheus Engine rpg community is incredibly energetic to say the least about producing rpg content & the latest issue of this venerable downloadable magazine isn't an exception to this fan legacy. 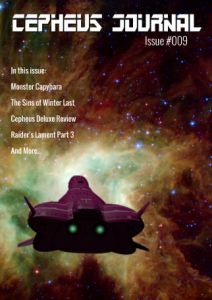 Right off the bat we get a fantastic Ian Stead cover & then dive into Ewan Spence's 2 RAR for Modern War & it does a good job of going into the material; "2nd Battalion Royal Australia Regiment for Modern War The 2nd Battalion, Royal Australian Regiment (2RAR) is an amphibious light infantry battalion of the Australian Army and forms part of the 1st Division Amphibious Task Group based at Lavarack Barracks in Townsville, Queensland." The article is detailed & well thoughtout. For Modern War this is a solid little article that does down scope into the military details of the Task Group. Modern War by Zozer games thrives on this level of detail. Raider's Lament by  Jo Jaquinta is a part of an on going series of stories & it captures the early old school Traveler rpg vibe quite nicely.
Monster Capybara  by  Jo Jaquinta is both monster entry & total encounter for Sword of Cepheus. And itrs done in such a way to be played in one night or as a part of an ongoing campaign as an inserted encounter. Very nicely done.
Interview with Paul Elliot by Brett Kruger  goes into some of Zozer Games back story & what the author's thoughts are. and its a well done interview.
A pretty solid review of the Cepheus Deluxe rpg by Brett Kruger rounds out this section & its a very detailed review & solidly done.
'The Sins of Last Winter' by Paul Drye is a Sword of Cepheus Rpg mini adventure set in a Winter location with all of the trimmings. There's some solid twists & turns as the adventure takes the party through some rather straight forward but harsh turns.
'The Chambersburg sector' by y P­O Bergstedt gives a full mini sector for old school 2d6 science fiction games or a complete Cepheus Engine rpg sector. There's some real details here & its a nicely done sector to add to your own home game.
'The Krampus' alien race by y P­O Bergstedt is perfect for adding a bit of that demonic & dangerous Christmas magic to your home Cepheus Engine rpg campaign.
All in all issue #009 of the Cepheus Journal  was well done, very nicely thought out, & really brings home the heat of the ever expanding family of Cepheue Engine 2d6 rpg family of games!

The Free  issue #009 of the Cepheus Journal Is Available For Download Here
Posted by Needles at 12:30 PM