When it comes to Kuntz & Ward's "Supplement IV" Gods, Demi-Gods and Heroes the Norse mythology certainly gets the lion share of coverage in the book. But why does this make things interesting for an Adventurer,Conqueror, King rpg? This blog entry will pick up from this blog entry here. 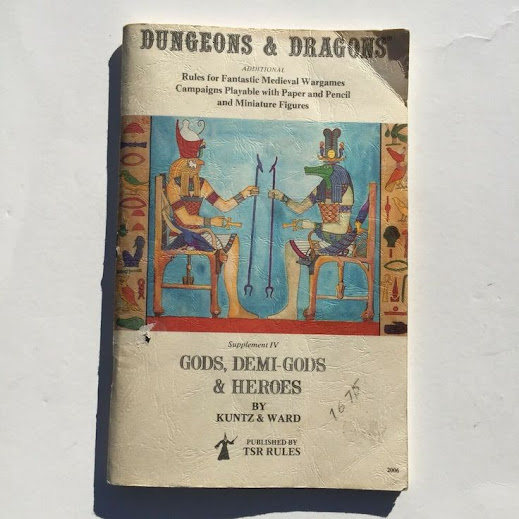 We know that Odin in Kuntz & Ward's "Supplement IV" Gods, Demi-Gods and Heroes is gearing up for war. But what god is he going to turn to when it comes such a war against chaos?! That god isn't Thor who get's the royal treatment in the additional material in  'Supplement IV' instead its Tyr whose an aboslute beast; "Tyr: Armor Class: 2 Magic Spell Ability: None Move: 12" Fighter Ability: 19th Level Hit Points: 250 Psionic Ability: Class 6 This one-armed God of War was overshadowed by Thor muchly and had very little to do with Norse Mythology. Tyr though is the only God capable of approaching the Fenris wolf with any success. He inspires a berserker type fighting (similar to Odin, but with only 50% effectiveness) in his followers rage. His dwelling place is not mentioned nor are his sons. He does occupy a seat amongst the twelve at Asgard and it is assumed that he dwells there most of the time."  Why would Odin turn to Tyr?! Because Tyr is actually the Germanic & Norse god of war & Law! This aspect of the god has Greco Roman connections; "These deities are generally understood by scholars to refer to *Wōđanaz (known widely today as Odin), *Þunraz (known today widely as Thor), and *Tīwaz, respectively. The identity of the "Isis" of the Suebi remains a topics of debate among scholars.[18] Later in Germania, Tacitus also mentions a deity referred to as regnator omnium deus venerated by the Semnones in a grove of fetters, a sacred grove. Some scholars propose that this deity is in fact *Tīwaz.[19]

A votive altar has been discovered during excavations at Housesteads Roman Fort at Hadrian's Wall in England that had been erected at the behest of Frisian legionaries. The altar dates from the 3rd century CE and bears the Latin inscription Deo Marti Thingso Et Duabus Alaisiagis Bede Et Fimmilene. In this instance, the epithet Thingsus is a Latin rendering of Proto-Germanic theonym *Þingsaz. This deity is generally interpreted by scholars to refer to Týr. The goddesses referred to as Beda and Fimmilene are otherwise unknown, but their names may refer to Old Frisian legal terms.[20]

In the sixth century, the Roman historian Jordanes writes in his De origine actibusque Getarum that the Goths, an east Germanic people, saw the same "Mars" as an ancestral figure:

Moreover so highly were the Getae praised that Mars, whom the fables of poets call the god of war, was reputed to have been born among them. Hence Vergil says: 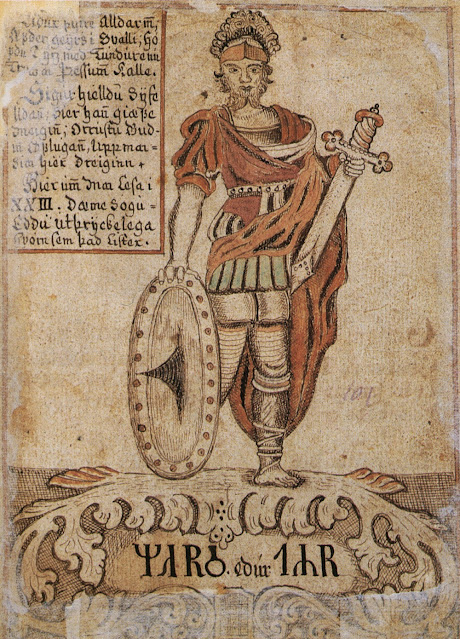 While Thor gets all of the press Tyr has many connections with Law & is going to be the natural enemy of giant kind & many of the Chaotic humanoid races. And his actions prove this especially his mention within

the  Sigrdrífumál; " the valkyrie Sigrdrífa imparts in the hero Sigurd knowledge of various runic charms. One charm invokes the god Týr:

'You must know victory-runes
if you want to know victory. Carve them
into your sword's hilt, on the blade guards
and the blades, invoking Tyr's name twice.'

In Lokasenna, the gods hold a feast. Loki bursts in and engages in flyting, a contest of insults, with the gods. The prose introduction to the poem mentions that "Tyr was in attendance, even though he had only one hand because the wolf Fenrir had recently ripped off the other while the wolf was being bound."[24] Loki exchanges insults with each of the gods. After Loki insults the god Freyr, Týr comes to Freyr's defense. Loki says that "you can't be the right hand of justice among the people" because his right hand was torn off by Fenrir, elsewhere described as Loki's child. Týr says that although he misses his hand, Loki misses Fenrir, who is now bound and will remain so until the events of Ragnarök.
When it comes to Law Odin is going to have a shaky relationship at best but Tyr is going to be his right hand man literally; "

The Prose Edda sections Gylfaginning and Skáldskaparmál reference Týr several times. The god is introduced in part 25 of the Gylfaginning section of the book:

High said: 'There is also an As called Tyr. He is the bravest and most valiant, and he has great power over victory in battles. It is good for men of action to pray to him. There is a saying that a man is ty-valiant who surpasses other men and does not hesitate. He was so clever that a man who is clever is said to be ty-wise. It is one proof of his bravery that the Æsir were luring Fenriswolf so as to get the fetter Gleipnir on him, he did not trust them that they would let him go until they placed Tyr's hand in the wolf's mouth as a pledge. And when the Æsir refused to let him go then he bit off the hand at the place that is now called the wolf-joint [wrist], and he is one-handed and he is not considered a promoter of settlements between people.

A. Faulkes translations (notes are by Faulkes)

[26] This tale receives further treatment in section 34 of Gylfaginning ("The Æsir brought up the wolf at home, and it was only Tyr who had the courage to approach the wolf and give it food.").[27] Later still in Gylfaginning, High discusses Týr's foreseen death during the events of Ragnarök:

Then will also have got free the dog Garm, which is bound in front of Gnipahellir. This is the most evil creature. He will have a battle with Tyr and they will each be the death of each other."

A. Faulkes translation
Tyr is literally straddling the bows of Chaos of the Norse gods & the high points of Law. He's the god with elements in both camps. He will have scouted out & taken down giants within Jötunheimr behind enemy lines.
PC's in our games over the years who were involved with Tyr did so with some darksides to their relationships with the god. From
'The OSR Grimoire' Blog comes this little tid bit; "Paul Karlsson Johnstone discusses berserkers in his excellent article "Origins of the Norse Pantheon" in The Dragon #29 (September, 1979)" And its this dark beserker aspect that can get the PC's killed and while they fill the ranks of Odin's army of the dead & Valhalla. Our party was often left with out our best fighters & thieves.
Another aspect of Tyr is the fact that the god is a master psionic & this could be how he deals with the powers of Chaos in very unexpected ways. Able to read minds, implant suggestions, and create opportunities for his worshipers.

How does this relate to the  Adventurer, Conqeuror, King rpg?! Think about where Tyr sits within the patheons of the Norse. A god of war, Law, and justice is going to on the front lines of a war between Law & Chaos. Because giant warlords crossing from Jötunheimr into Midgard is a real possibility with vast armies of humanoids & smaller giant kind such as ogres & the like. This is the time when kingdoms can be won in battle but warriors should remember the fact there is a ton of crossover material potential here. Crossover potential with both Conan's Hyboria supplemental material & Elric's supplemental material within Gods, Demigods, & Heroes. In the flickering candle light of when the oceans drank Atlantis & the rise of the Norse gods,Crom has his hands full with the Celtic gods & mythology.  These competing gods are going to war among themselves as well as the forces of Chaos. There's plenty of room for the players to get caught up in such affairs. See Michael Moorcock's mythos for the type of disasters that can happen when dealing in the affairs of the gods.
Posted by Needles at 8:21 PM