Pulps can be difficult things to sometimes get a hold of or they used to be Appendix S material is a very mixed back of stuff. Appendix 'S' is what I refer to as my go to science fantasy index.

Science Fiction Adventure Classics which ran from '67 to '74 was a God sent in some respects, according to the Pulp Trader Website;"A series of reprint magazines.
In Spring 1969, Ultimate Publishing Co. started printing Strange Fantasy, which ran issues #8-13 and made it look like they were changing the magazine name. But then they went back and continued Science Fiction Adventure Classics with #8. 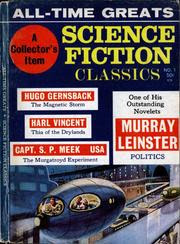 In 1970 they repeated this by starting Space Adventures with issues #9-14. They continued the original name with an Annual and a Yearbook edition, but those were not numbered. Finally, they restarted Science Fiction Adventure Classics with #12.
--Gordon, February 11, 2002"
They even feature a check list for the magazine which is important for the downloader/collector like me.

Science Fiction Adventure Classics was always a mixed bag for reprints but there were some great stuff here from Hugo Gernsback to the classics of Murray Leinster. So here's what we're going to get in this issue:
THE MAGNETIC STORM, HUGO GERNSBACK 5
POLITICS, MURRAY LEINSTER 18
THE LUNAR CHRYSALIS, RAYMOND GALLUN 40
THIA OF THE DRYLANDS, HARL VINCENT 66
THE MURGATROYD EXPERIMENT,
CAPTAIN S. P. MEEK U.S.A 100
SHORT STORY
THE EGGS FROM LAKE TANGANYIKA, CURT SIODMAK 93
FEATURES
INTRODUCTION 4
THE SKYLARK OF SPACE,
ILLUSTRATED BY FRANK R. PAUL.... COVERS 2,3,4
A PORTFOLIO, JULES VERNE
ILLUSTRATED BY FRANK R. PAUL 127

I'm really interested in Thia of The Drylands which is a science fantasy novella from the Gernsback era of science fiction. Known to a few devotee's of Mars science fiction it first appeared in the  June 1927 issue of Amazing Stories magazine.
Synopsis: A woman aboard the captured space liner “Poseidonia” is taken to the Red Planet amid a clandestine campaign by Martians to steal Earth’s water. Its got a ton of stuff to loot for a Mars style game from the  Martian city of Risapar on the banks of the Canal Pyramus, one of the canals mapped by Schiaparelli in the late 19th century. This rip roaring tale takes place in the future post Colonial era of Mars & its got a bit of everything for the enterprising DM to pilfer. There's a really good break down of this classic story right over here from '09.
There is a ton here to draw from and use for any science fantasy Mars but given my recent preoccuptation with my Mars. This is an excellent look into one of the human city states. 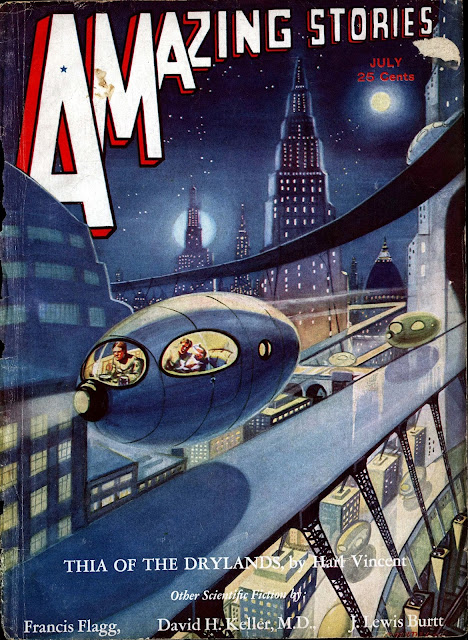 Download & Grab Science Fiction Adventure Classics #01 (1967 Summer) Here
So when we look into the possible recent OSR connections I'm drawn to the new Aurach kickstarter which has two books their trying to get off the ground the Heroic Fantasy Handbook™ &  the Barbarian Conquerors of Kanahu Setting Sourcebook™. But for the moment let's look at the the Barbarian Conquerors of Kanahu Setting Sourcebook™. (I'm not crazy about all of the trade mark symbols of the new books. They're off putting reminding me of the classic TSR era's Marvel Super Heroes game). 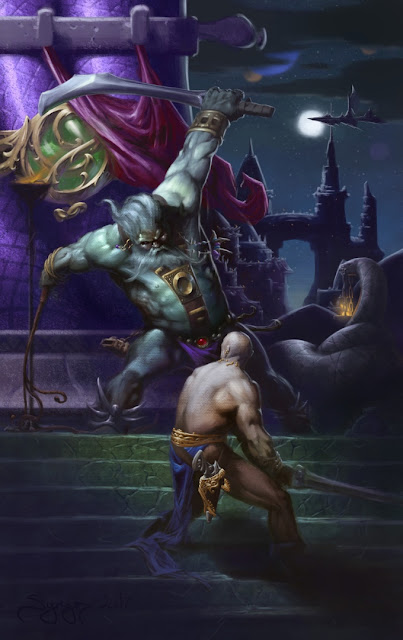 The Barbarian Conquerors of Kanahu Setting Sourcebook is their science fantasy setting book & it has the usual science fantasy bells and whistles but toned into the ACK's world setting :
While the Heroic Fantasy Handbook explores the classic heroic fantasy genre, Barbarian Conquerors of Kanahu embraces what might be called “barbarian fantasy” or perhaps “pulp fantasy.” Barbarian fantasy is an amalgam of three distinct but related genres. The first is sword & sorcery literature, exemplified by the likes of Howard's Conan and Moorcock's Elric. This genre counterpoises corrupt, decaying cities and empires with rough-edged barbarian upstarts. It contrasts the decadence of urban life with the vigor of those untainted by it. This might have been inspired by the fall of decadent Rome to the Germanic "barbarians"who set themselves as kings of its ruins, or even by Samson's divine-inspired exploits against the urbanized Philistines.
The second is sword & planet, exemplified by Edgar Rice Burroughs' Barsoom, a fantastic vision of Mars. This genre explores similar themes to those of sword & sorcery but does accept certain "science fiction" elements such as alien planets, radium pistols, flying craft, and other technological wonders. Sword & planet still follows the vision of a morally-ambiguous 'outsider' protagonist, archetypically an earthling on Mars, using his might to smash the decadent villainy of the local society.
The third is science fantasy proper. This book, however, presents a "science fiction" milieu closer to a fantastic setting once the outer trappings of starships and rayguns are stripped off it. This genre is exemplified by space princesses, dashing interstellar rogues, space combat which looks suspiciously similar to WWII air combat, and a relative disregard of actual science when it conflicts with the plot. The same tropes of the barbarian fantasy genre also apply here: it is easy to envision the mighty lost-world barbarian smashing through the ranks of raygun-wielding aliens with his massive sword, answering their advanced technology with his brute strength.
With barbarian fantasy as its inspiration, Barbarian Conquerors of Kanahu presents new monsters, magical items, technology, spells, classes, and variant rules, all packaged together in Kanahu, a dangerous world of pulp fantasy. Kanahu draws on the myths of the Ancient Near East and pre-Colombian Mesoamerica and blends them together into a gonzo milieu with dinosaurs, Cthulhoid creatures, giant insects, crazy sorcerers, muscled barbarians, city-states, alien visitors, and super-scientific technology. You get:

Given the quality & type of books that comes out of
Autarch I'd back this one. It looks like there is a ton to use in these two books but their not out otherwise I'd be contacting Alexander Macris  for the books now!

Actually both books are right up my alley so if it was me I'd back this one now.
I'll go into more detail on the kickstarter in another blog entry soon. But for now that's all I have the time for. Keep em rolling.