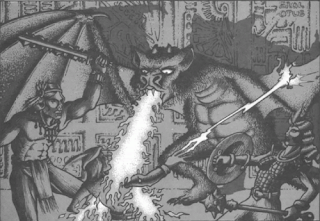 I've been thinking a lot about C1 The Hidden Shrine of Tamoachan & the idea of the module's force's taking far more proactive adventure advantage in an old school campaign world. In case you don't know, "It is the first in the C-series of modules, a set of unrelated adventures originally designed for competitive play, with the C representing the first letter in the word competition." So right out of the gate its a deadly little adventure for Con style play. And its also a classic with all that implies because its a trap heavy adventure that introduces a Central and South American flavored setting drawn from Aztec & Mayan culture as well as mythology influences. I use those terms very loosely because it introduces some stuff that seems like it came straight out of a '30's Weird Tales issue that hit the stands way back when. 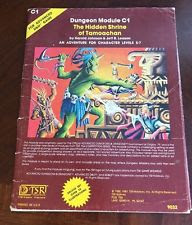 "
"The adventure itself takes place in the Amedio Jungle at a disused temple near the ruined city of Tamoachan which center around the Olmen culture. And that's where things get interesting because what if the culture isn't waiting for adventurers to find them 'lost world' style. What if these warriors are on the road to warfare and conflict with the surrounding tribes, warriors, and others. This might make sense for all of the tricks and traps that could actual mechanisms for the PC's to be released into the temple complex & there to be used in as bait and or as a gift to the gods. This makes a lot of sense especially since the PC's are given over to;"The original tournament play of the adventure had the player characters fall into the lowest level of the shrine (a ziggurat) whilst fleeing from pursuers". Suddenly things are starting to make more sense as the empire is expanding and the PC's heads are on the block for the 'gods. The perfect level to run PC's through this adventure is really 6th-8th(perhaps a 3rd through 6th level for AS&SH PC's) level characters adventure fest and reasonable for those levels of characters. 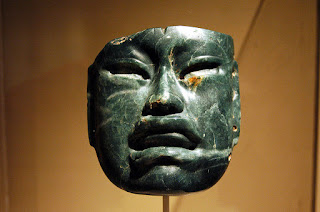 The original photograph on Flickr was taken by AlkaliSoaps

Because of the isolated & trap heavy dangerous nature of C1 The Hidden Shrine of Tamoachan makes it perfect for sword  & sorcery games such as an adjusted game of Advanced Dungeons & Dragons first edition or ever a retroclone such as Astonishing Swordsmen & Sorcerers of Hyperborea . Because C1 is a competiton module there is a chance that the parts can be used separately from the whole. There was some talk several years ago among the DM's that I hang with that C1 could be used with some heavy modification as a part of a pulpy domain level take over game with a system such as Adventurer, Conqueror, King. The PC's circumvent capture and slowly knock out obstacles, traps, and more this is followed by them taking over the whole lost world temple complex and kingdom. This is going to require months of work on the DM's and players part. This means that you've got a built in lost world and pulpy campaign for months to come. 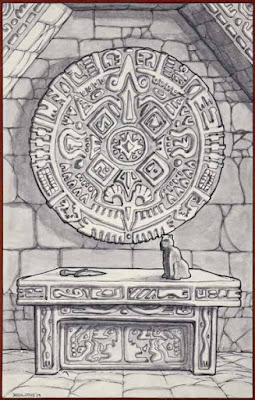 Of course all of this hinges on the PC's surviving the entire experience and I have a feeling your going to see three or more PC's for each player involved. The traps are that deadly & the most's that one can hope to gain from C1 is a reasonable treasure or two but even those are somewhat lacking for the most treasures, the real asset is the temple itself along with the Olmen culture. Given Adventurer, Conqueror, King or AS&SH this sort of a take over could have the PC's taking over by campaign end.There are several reasons why this will work  :
With some clever bits its incredible to see just how flexible the classic era TSR  modules can be as both adventure & tool kit. 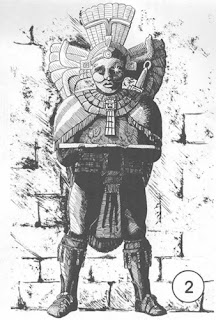 In terms of design and function C1 does exactly what it sets out to do as a tournament functioning adventure with its own internal scoring system at conventions. But what we're talking about here is to take the bones and then run with it in other directions either way C1 The Hidden Shrine of Tamoachan is classic era TSR at some of its best and most lethal.