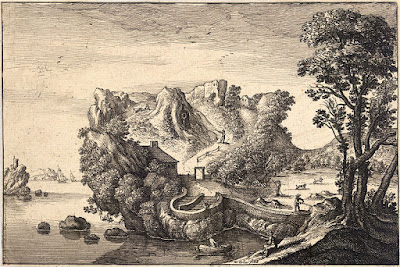 Landscape shaped like a face. State 1. from Wenceslaus Hollar

So when is the PC's domain,adventure location, etc. also the monster & perhaps siege weapon? When it happens to also be 'a landscape giant'. This of course comes from the great polymath from the 17th century  Athanasius Kircher whose been my dungeon saint for years now. I'm zipping around the public domain review site this morning and stumbled upon this.
The possibilities with this really are endless, the dungeon can suddenly become an NPC itself as the explorers have to navigate the inner workings of the adventure location itself. The story is according to the article;
"One of the most popular versions of the anthropomorphic landscape is the depiction of a bearded man, horizontal in rocky profile. The beginnings of this can be traced back to an image created by the great 17th-century polymath Athanasius Kircher, featured in his Ars magna lucis et umbrae (1645/6). Kircher’s design is said to have been inspired by a story related by Vitruvius about the 4th-century-BC architect Dinocrates’ plan to sculpt into Mount Athos a colossal image of Alexander the Great, who would hold a small city in one hand and with the other pour a river into a sea by means of a gigantic pitcher. Kircher’s more modest rendering — involving only a face rather than full body — was to be copied and riffed-upon many times over the next decades, including by Wenceslas Hollar, who in his rendition trims the “beard” and “hair” for a general smarter appearance."

Forget fighters having mere fortresses & wizards having towers, what if our adventurers have entire giants made up of their holdings as a possible siege weapon or dungeon. The investiment in time and resources isn't that far off what we see in AD&D or B/X D&D but its really within the Adventurer, Conqueror, King rpg system  line that things begin to shine. 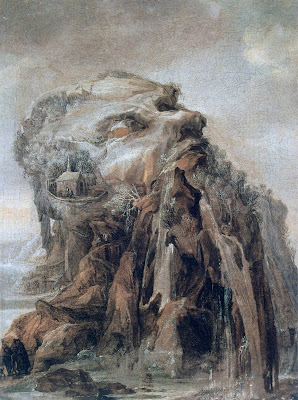 
The recent Heroic Fantasy & Barbarian Conquerors Collection kickstarter presents the spell singing rules in their most recent update and here the idea of this sort of spell casting to awaken such a giant becomes quite appealing from a OSR adventure potential element perspective;
"He chanted a song of wizardry, / Of piercing, opening, of treachery / Revealing, uncovering, betraying. – The Lay of Leithian in The Silmarillion (J.R.R. Tolkien)
Spellsinging is an alternative way to perform magic that is more fluid and flexible than traditional spellcasting. Spellsinging was inspired by the magic of Middle Earth, as used by Tom Bombadil and Lúthien Tinúviel; the magic of the Kalevala, itself based on traditional Finnish spellsongs; the magic of the Greek hero Orpheus; the magic of Blue in the Apprentice Adept series; and more. It could also represent other fluid types of spellcasting, such as the Wheel of Time’s channeling. The following rules explain how spellsinging works. The Elven Spellsinger class in these rules is built on these mechanics, but the Judge may convert other classes to spellsingers if desired." The PC or NPC doing such a casting is going to seriously burn through some very large amount of spell points to pull this off. Read more right over here 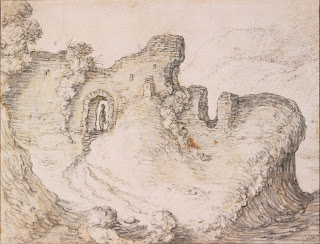 Study by Herman Saftleven
This also opens up the possibility of using these types of creatures for full borne adventure locations within a post apocalyptic wasteland. These sorts of giants might be controlled by ancient A.I.'s or other half forgotten super science technologies. Assigning a range of stats for this sort of an adventure location is sort of foolish but there are plenty of adventure ideas that can be used with this sort of a domain. The upkeep alone is going to require double the amount of magical energies, food stuffs, resources,etc. They might well be a part of a wasteland waiting to be sprung on unsuspecting adventurers. 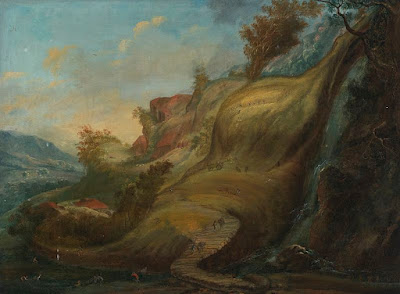 A Hilly Landscape with an anthropomorphic design

Periodic spell singing or rituals might be needed to keep such a location asleep & ready for a possible military application of these monsters. Your talking at least several miles of landscapes, buildings, etc. to support such monster's Gygaxian ecologic needs. These monsters make ideal dungeon locations unto themselves especially for a sword & sorcery style game. These monsters might be the remains of Hyperborean horrors that were created centuries ago within the bounds of Hyperborea as temple, wizard tower, or Hyperborean city locations for the Astonishing Swordsmen & Sorcerers of Hyperborea game.

All in all these landscape giants are a perfect old school campaign element that can add another lay of adventure and weirdness to your campaigns. 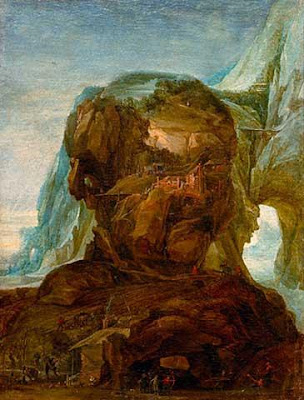 
All artwork shown is within the public domain and breaks no copy right. So enjoy!
Posted by Needles at 2:35 PM