B/X Dungeons & Dragons has always been far push away from the OSR material that inspired especially with the third wave of OSR stuff that has come out recently or has it? Let's take a deep gaze into the background of  classic TSR era Dungeons & Dragons, Venger's Satanis's material, & call to pulp adventure once again. 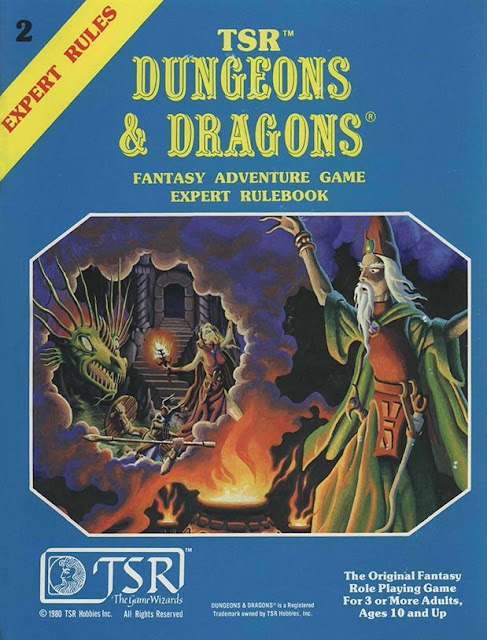 When it comes to classic B/X Dungeons & Dragons I draw down from the classic Seventies & Eighties schools of adventure table top role playing games and comic books. There seems to be a sense to this era that anything goes at the table. The latest trends in gaming just don't seem that interesting lately.
I keep glancing at a stack of Eighties comic books and suddenly my eye rests on an advertisement that seemed to be everywhere back then. 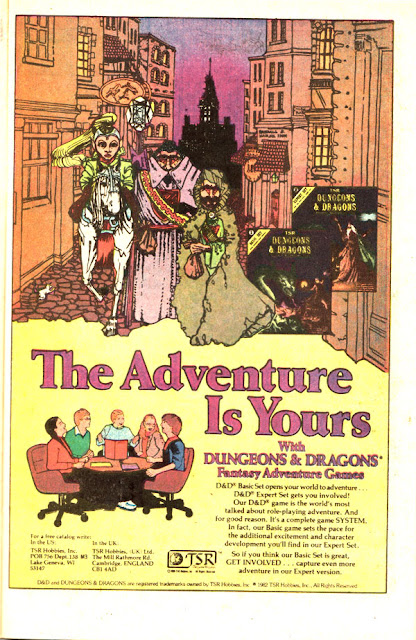 Mentzer,Moldvay,& Holmes Dungeons & Dragons are sort of my soul's comfort food when it comes to designing, reading, & going through the motions of thinking of the philosophy of B/X D&D. Its this comment from a discussion about The Mentzer D&D set that caught my attention today from Simon H over on Drivethrurpg;
"Reading Moldvay recently was a revelation. At every turn the implicit assumption is that your Basic D&D character is awesome. Of course your character can ride a horse, fight from the saddle, swim or command a ship! Simply state it on the character sheet and maybe give a short explanation how the character gained the ability. Done! Magic is powerful, the spells have none of the limitations and ‘safety catches’ that tame them in other editions. Instead their raw power is exposed. Finally, there’s a small rule in the back of the book that makes the game. If there’s not a rule for doing something, just ask the player to roll 1D20 equal to or less than an appropriate characteristic, maybe with a modifier. Boom! At a stroke your characters become truly heroic, able to have a go at anything. Not even level is a limiting factor. Unfortunately this rule was excised in the Mentzer edition."
Its just that process of you can do anything with D&D  that gets me back into the frame of mind to create OSR material. The creative process is one of the reasons why I'm drawn into D&D at my age & it seems to resonate with both players & dungeon masters alike for the same reasons.
So that being said I'm quietly putting together what I can actually do with the Islands of Purple Haunted Putrescence & I pulled out my copy of Liberation of the Demon Slayer to add to the heady mix. I'm using Liberation of the Demon Slayer as more of a source book rather then an actual adventure at the moment. Convert the Elves over to Hyperboreans & your good to go. Cradle of Rabies has a really nice review of Liberation of the Demon Slayer. 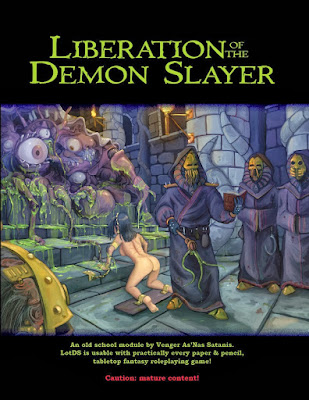 One of the things I really like about the location of the islands on Hyperborea is the fact that I can add or subtract anything 'Bermuda Triangle' style from across time & space which still won't break the setting into tiny pieces. This means I can add in a  classic historical Roman fort someplace on the islands holding its own against the forces of demonic horror & still not break the setting. A classic Castra showing up upon some part of one of the islands is something I've been tossing around for awhile now. You need a few points of stability & trade among the chaos and horror of the purple. A good example of what I mean is this piece of cartography done by
Mediatus  from wiki commons note the classic playing card diagram. 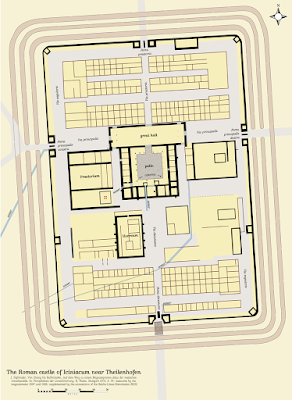 This also means that I can as a dungeon master incorpote different NPC's from other OSR products or setting elements as needed. Case in point is Rpg Pundit's Dark Albion which is perfect for creating time or dimension lost adventurers, outlaws, and other NPC's from the world of Albion and sticking them on The Islands of Purple Putrescence. They're not simply another faction on the islands but there in the service of their demon gods & trying to further the causes of the Rose War back home. 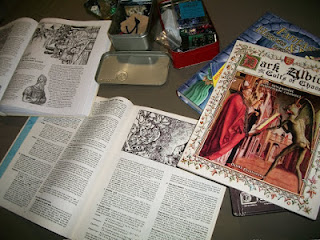 Monsters of these islands are going to have their own unique feel and abilities. Kobolds for example might be far more pulpy entities then your normal run of the mill horrors. Purpled up cockroach style monsters with the abilities of a troll's regeneration & the ability to over run adventurers. They serve the islands god hive mind and its needs. They're mad, bad, & dangerous but far more rare then standard goblins. The islands generate them as needed. 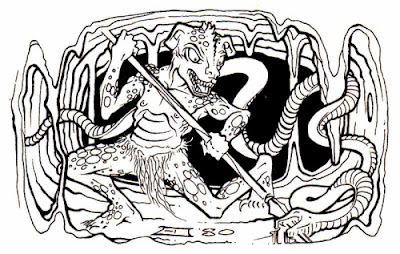 The islands & Hyperborea have their own take on the classic B/X & D&D monsters, this isn't actually me as the dungeon master taking liberities with the setting but the fictional setting itself taking liberties with its own mythology. Going all of the way back to Clark Aston Smith's Hyperborean cycle which takes its cues from H.P. Lovecraft and Clark Aston Smith. Venger Satanis & Jeff Talanian as both writers and designers are well aware of this fact. They've read the Hyperborea cycle stories and have incorporated the Hyperborean Demonology, inspired by the works of Clark Ashton Smith into their game design. 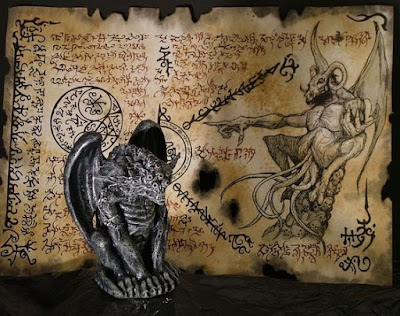 Some of the delightfully demonic artwork of mrzarono.deviantart.com appears in various Kort'thalis Publishing's products giving me a much needed clue about the origins of this end of the Lovecraftian hi jinks. All of this leads back to the Old Solar System campaign model that I've talk about ad nausea before.  Here's the pulpy Clark Aston Smith stories for Hyperborean reference: