So tonight I got together with players to do a PC workshop for Astonishing Swordsmen & Sorcerers of Hyperborea. The PC's filled in character sheets, discussed system mechanics, chose races, classes, and then I proceeded to ship wreck them on The Islands of Purple-Haunted Putrescence by Venger Satanis. 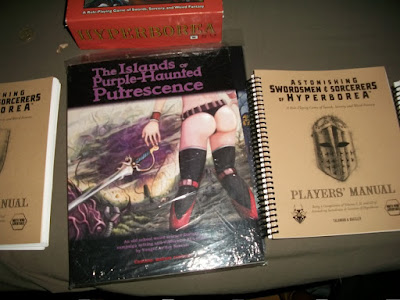 I was looking to get back to my roots as a friend of mine said about The Islands of Purple Haunted Putrescence  a weird-fantasy gonzo-sandbox with sci-fantasy, lots of lovecraftian overtones and a "Heavy Metal" aesthetic which is pretty much my comfort zone. 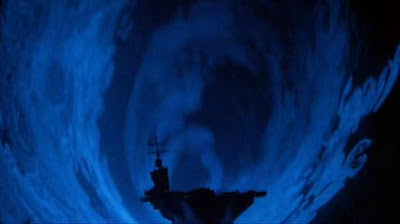 So a fishing junk with a mixed crew of rough neck fishermen encountered a weird storm & the main mast was hit by lightning. The  boat drifted for what seemed like days until it reached the shoals of some ancient and accursed island off the coast of the Hyperborean mainland. There were hundreds of wrecks & a coying mist that clung to the islands shores. The party's shaman alright has felt a strange pulsing magic from the fog and weirdness of the black sandy beach with its weird vegetation. 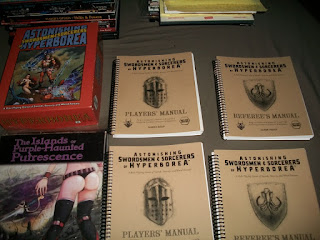 I gave out the Astonishing Swordsmen & Sorcerers of Hyperborea Player's Guide & gave a bit of background for the player's PC's. A long time ago I bought two copies of both the Player's and Referee's manual so that it would be easier to run a game without having to stop every two minutes to cross reference during character workshops. Everything came off very smoothly with the player's equipping their PC's and just waiting to get into the mainland with its sword & sorcery action. 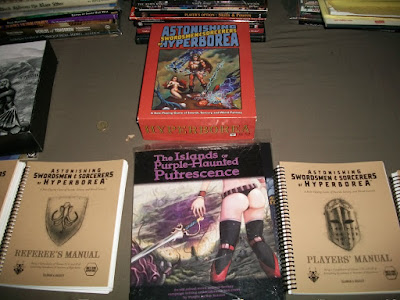 The players are expecting more of  the Eighties sword & sorcery material that inspired Venger's latest Crimson Dragon Slayer fueled Kickstarter which is just a hundred bucks shy of its goal for the Return of the Trinity of Awesome.  Yes its worth back in my opinion.
But already I've got other plans & schemes worked out for them, lately I've been drawing from a much deeper well then simply the usual Eighties awesomeness.
I've always been a Fantastic Adventures pulp fan, the covers were always incredibly lurid & starkly science fantasy. They freely mixed both sword, sorcery & science fiction with generous helpings of horror and weird fiction. In other words its material that's ideally suited for the style of campaign that I want to run. 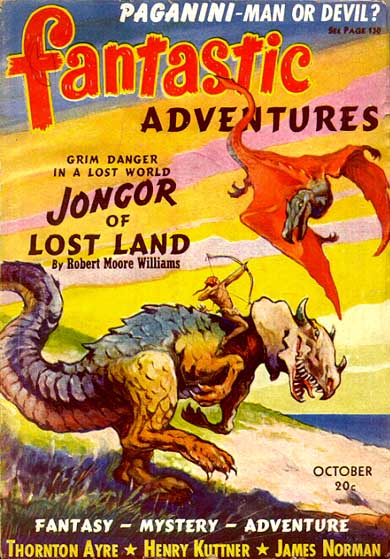 "Fantastic Adventures was an American pulp fantasy and science fiction magazine, published from 1939 to 1953 by Ziff-Davis. It was initially edited by Raymond A. Palmer, who was also the editor of Amazing Stories, Ziff-Davis's other science fiction title. The first nine issues were in bedsheet format, but in June 1940 the magazine switched to a standard pulp size. It was almost cancelled at the end of 1940, but the October 1940 issue enjoyed unexpectedly good sales, helped by a strong cover by J. Allen St. John for Robert Moore Williams' Jongor of Lost Land. By May 1941 the magazine was on a regular monthly schedule. Historians of science fiction consider that Palmer was unable to maintain a consistently high standard of fiction, but Fantastic Adventures soon developed a reputation for light-hearted and whimsical stories. Much of the material was written by a small group of writers under both their own names and house names. The cover art, like those of many other pulps of the era, focused on beautiful women in melodramatic action scenes. One regular cover artist was H.W. McCauley, whose glamorous "MacGirl" covers were popular with the readers, though the emphasis on depictions of attractive and often partly clothed women did draw some objections." "
Like so many of the Ziff Davis pulp material much of this stuff is public domain now and so great stuff to draw on for a sword & sorcery campaign especially Astonishing Swordsmen & Sorcerers of Hyperborea. A great example is  Fantastic Adventures v10n07 1948-07, solid cover and some top drawer material. And its a free download over here 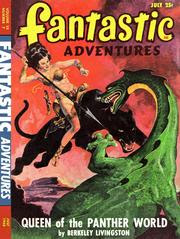 A second example of the heady mix of classic sword, sorcery, & weird fiction would be Avon's Out Of This World's Adventures. A strange hybrid of pulp magazine, comic book, & weird fiction all under one public domain roof, it only lasted two glorious issues.
" Out of This World Adventures was a pulp magazine which published two issues, in July and December 1950. It included several pages of comics as well as science fiction stories. It was edited by Donald A. Wollheim and published by Avon. Sales were weak, and after two issues Avon decided to cancel it."
Once again we see Donald Wollheim's name associated right in the middle of one of the classic pieces of 1950's science fiction and fantasy. This magazine led the way for the digests and zines of the 50's through 80's. 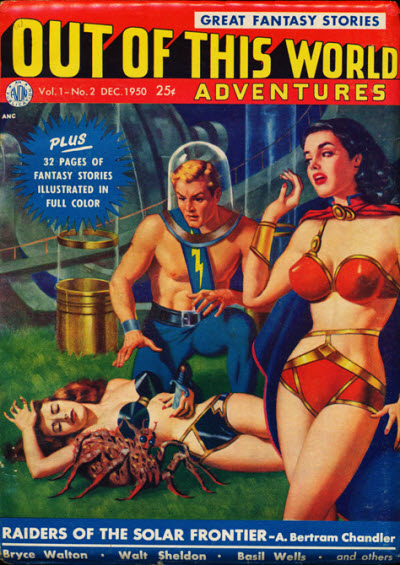 You can download Out of This World issue One & Two HERE

The type of weird fictional random encounters that I'm looking to do here in this campaign are woolly, dangerous, pulpy & with a good twist of the Lovecraftian thrown in for good measure.
1d20 Random Purple Islands Pulp Encounters Table

1. 1d8 crewmen of a lost world war two bomber who have been lost on the island for two years
2. A group of mutant pilgrims on their way to sacrifice themselves to one of the island's horrid elemental purple volcano gods. There is a twenty percent chance of them having relics on them.
3. A dark necromancer and his zombie monster bodyguards on their way to cause a plague upon one of the rival tribes
4. A band of mutant adventurers from the far future on a mission from their mutant god master for animal women slaves.
5. A barbarian with his mutant animal companions on their way to a shrine of his ancient god forebears. He is for hire and needs to complete his mission for his god.
6. A giant mutant ooze that is simply out to eat everything it encounters.
7. Hyper intelligent dinosaurs all part of a dangerous alien hive mind are looking to collect human slaves to take back to their world as a part of a weird experiment.
8. A giant brain mutant from the future is looking for his mate and to pay homage to his Lovecraftian gods. He will pretend friend ship to sacrifice PC's to his gods.
9. A dangerous alien crystal entity is after an agent of chaos and suspects one of the PC's of being that agent. It will destroy anyone in its path.
10. A team of serpent men seeks one of the PC's for his or her role in their species extinction before it happens.
11. A Lovecraftian cloud thing is looking for slaves and things to exploit for its sorcerous whims.
12. A lone astronaut is being pursued by ape men bounty hunters from a dying world and they are armed with death rays and force field belts. They ride cyber horses
13. A crew of Eighties seamen have survived being ship wrecked but they are being hunted by mutated birdmen who wish to eat or enslave them. They are armed with tridents and spears.
14. Twelve alien plant men are tearing through the sky on clouds of sorcerous vapor looking for flesh bags and humanoids to take to their brood mother goddess to eat.
15. A strange twisted being of alien flesh and bone is looking for captives or slaves to make a part of himself with necrotic magic. A very dangerous wizard of highly dangerous aspect.
16. A demon from Saturn seeks a mate for his wizard master and he's not choosy.
17. A lone spawn of Cthulhu seeks to awaken his dark master for an alien agenda and he needs sacrifices.
18. An amazon panther rider seeks her sisters to slay a demonic overlord someplace on the islands.
19. Ancient horrors from beyond are looking for one of the PC's & the dangers they pose to their dark masters.
20. An ancient magician of the purple gods seeks to gain the soul of some poor fool. Guess who he's looking for.