There are two brand new covers for Th Guide To Unamerica From Shield of Faith Studios on their new kickstarter.. My preference has been for this cover for the brand new Unamerican Survival Guide For Shield of Faiths new Kickstarter. I can already hear the groans and hisses for not another Kickstarter. Hold off because this is quality DCC & post apocalyptic material! 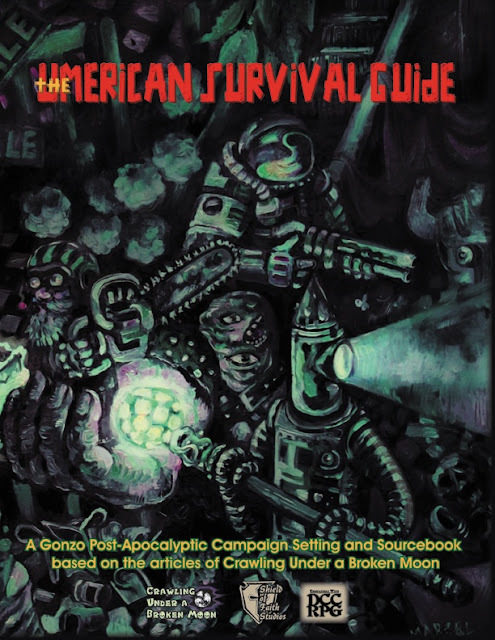 So +Reid San Filippo  sent me an email announcing the kickstarter for The Unamerican Survival Guide.This is one of those kickstarters that I've been waiting for for a long time. Because the Survival Guide is ultimate a setting guide for Unamerica which has been 'the Crawling Under A Broken Moon' default adventure setting. That being said Shield of Faith Studios makes quality material & I've used their material in my own campaigns over the years.


The thing I've always loved about the Crawling Under The Moon DCC fanzines was how flexible & cool the character classes were. These are PC classes that are built into the adventure campaign setting and give reasons for their wasteland crawling & you get the full range :

Then there is that sweet patron action that PC's seem to love but these are the wasteland gods whose nature is  fickle & radioactive:
$ (pronounced “cash”) - The fickle goddess of barter and wealth (neutral)
Buddy O’Burger - The Clown God of Feasting, Customer Service, and Cannibalism (lawful)
Classica - The goddess of Rhythm, Order, and Culture (lawful)
Elmos - The puppet host of eternal pain and suffering (chaotic)
Grokk - The master of the twisted Wilds and Wastes (neutral)
Kizz - The mighty intergalactic god of rock and roll (neutral)
The Lords of Light - The heavenly host of Justice, Honor, and Courage (lawful)
Nuka - The gentle lady of the Holy Glow and mother of all Mutants (neutral)
Petrolex - The amorphous deity of Fuel and Fire (neutral)
S’aganoid - The entity of Truth and Science (lawful)
Santa - The Giving God (lawful)
Silk - The golden lord of lies (chaotic)
Technos Discos - The terrible bringer of Beats (chaotic)
Theszolokomodra - The 1000 headed multi-dimensional space Hydra (neutral)
The Ultimospark - The manyfold entity of artificial perfection (neutral)
Whaaar! The god of violent combat and strength of arms (chaotic)
Yyaallaayy - The Nth dimensional lord of Madness and Randomness (chaotic)

My players hate these wasteland gods because more then a few times these NPC gods & spirits are very hands on with their worshipers. It looks like if things come off in this Kickstarter we're going to be getting revamped artwork and more with the The Unamerican Survival Guide. I know how Shield Of Faith Studio operates and they pack on the material in their products. So we're going to be getting new artwork and more for the DCC wastelands.

So knowing these folks as I do, if this Kickstarter funds they'll come through with a solid product & more mayhem for the wasteland dungeon master. If you want to see this product hit the OSR wilds then by all means go support them!

If You Want To Support The Umerican Survival Guide Kickstarter
Go Here!
Posted by Needles at 9:35 AM