Castle Amber is a classic D&D module with an incredible reputation among dungeon masters & players. Its one that the module deserves but for a moment let's slice deeper into X2 Castle Amber. 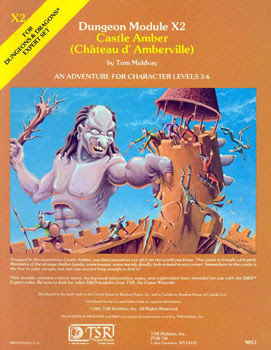 This is a module that takes PC's out of their comfortable element & throws them down the rabbit hole of the chaos of dimensional travel at levels 3 through 6 of Expert Dungeons & Dragons. Its called Expert D&D for a reason. Players are going to have to think on their feet in this one.  But really at the heart of Castle Amber?

X2 Castle Amber is one of those special modules that echoes both Clark Aston Smith & Tom Moldvay's vision while paying homage to a number of pulp authors & classic elements . But the module is special for a number of reasons. One of which is the fact that the adventure locations within X2 might as well be a mini plane of its own. While it echoes Clark Aston Smith strongly there are snatches of Edgar Allen Poe, H.P. Lovecraft and more pulp writers. This isn't surprising given the love that Mr. Moldvay had for those writers. Here's the thing X2 was designed for higher level D&D expert PC's, I've seen this module used with lower level PC's with some rather deadly results. So some caution is advised when taking players through this module. 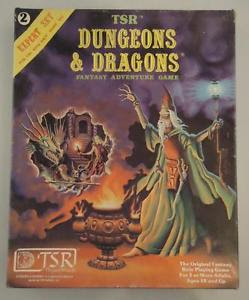 Let's look deeper into the plot;
"During their night's rest on their way to Glantri, the player characters are unexpectedly drawn into a large castle surrounded by an impenetrable, deadly mist. This is the result of a curse the wizard-noble Stephen Amber (Etienne d'Amberville) put on his treacherous relatives for murdering him.
The only way to escape Castle Amber (or Château d'Amberville) is to explore the castle, putting up with the demented and at times insane members of the d'Amberville family and the other, often hostile, denizens, and open a hidden portal to the wilderness of the world of Averoigne, where the party can find the means to reach the inter-dimensional tomb in which Stephen Amber rests, in order to break the curse and return home.
In this world, magic is frowned upon, and spellcasters may come to the attention of the Inquisition." "

So right off the bat we're dealing with the machinations of Stephen Amber (Etienne d'Amberville) whose a complete and utter jerk with little regard for anyone who runs across his dimensional trap & magical curse. I'd put him right up there with many of the evil classic spell casters of Clark Aston Smith or Michael Moorcock. 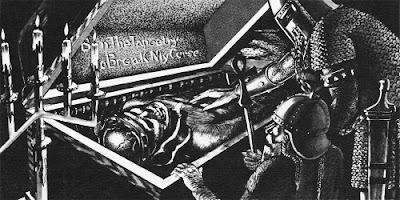 Granted his family are a bunch of complete lunatics but still, you've got to admit he's a bit on the warped side of chaos, in fact one reviewer from "No. 35 of White Dwarf magazine, reviewer Jim Bambra rated Castle Amber 6 out of 10. Bambra saw the adventure as "an attempt to bring randomness back into D&D."[1] Bambra considered Castle Amber a chaotic adventure and did not recommend it for purchase, noting that it "depends a lot on chance, leaving little room for skill, and at times can be deadly."" Let's go with that assumption and view point for a moment. Suddenly X2 is completely out to kill the PC's right from the word go. This basically means that Stephen Amber (Etienne d'Amberville) is a lunatic of the highest order & evil beyond words. He's basically right up there with any of the other creations of Smith. I say this with all of the admiration for both Clark Aston Smith & Moldvay. The fact is that curse or not, dimensional travel will be introduced into an 'Expert' D&D game and the DM is going to have to deal with it. In fact the DM is going to have to deal with the fact that the players are going to hunger for it if their PC's survive the experience. But what is Castle Amber itself as an adventure location?
So what you're looking at is another dimensional realm straight out of not only Clark Aston Smith but also a 1960's or 70's Roger Cormon or House of Hammer production at the height of its film production. This also makes Castle Amber a perfect realm to add to either the demi plane of dread of Ravenloft or an other worldly dimensional location all on its own. This is where the dungeon master & players have decisions to make about the direction of their campaigns. 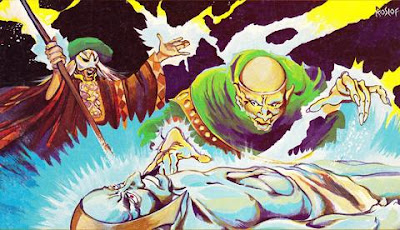 Alright so let's get into X2's use with the OSR & retroclones. Right off the bat I can think of at least two retroclones that I've run X2 Castle Amber with. These include Lamentations of The Flame Princess where the castle appears as a part of a war torn and ravaged France. The PC's were subject to the ravages of the castle & machinations of its inhabitants. And the second was Dark Albion which is where the module really shined.
With the frogmen of France closing in on the countryside  the wizard-noble Stephen Amber (Etienne d'Amberville) brought down the full weight of his magic on the invaders but the gods were not on his side. He and his family were cursed and the castle was banished to the realm of  Fairyland outside of time & space. Now its been wandering trapping and murdering folks for centuries. The place is a danger to anyone it comes across as a menace of the highest order. 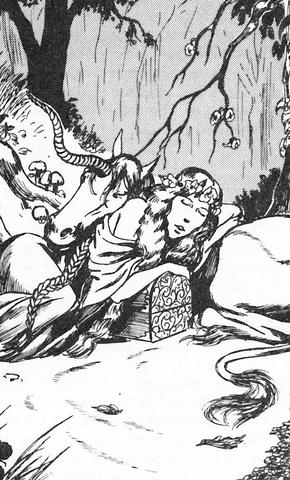 So why use X2 Castle Amber? There are at least ten reasons right off the top of my head: