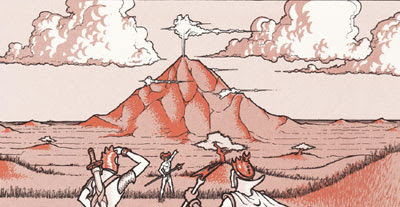 "White Plume Mountain has always been a subject of superstitious awe to the neighboring villagers. People still travel many miles to gaze upon this natural wonder, though few will approach it closely, as it is reputed to be the haunt of various demons and devils."So let's talk S2 White Plume Mountain here for a moment, this is one of the classics & has to be run for a group of experienced players. When it comes to classics this one of the more twisted ones, with the designation of special & it lives up to that designation. Its also one of the higher level modules that whilst designed for the world of Greyhawk can be adapted for other worlds. That's what we're going to be talking about today. 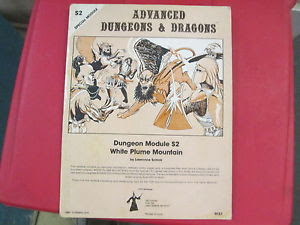 At S2's heart & soul are the three Moorcock style weapons,"precipitated by the theft of three magical, sentient weapons:[6] a trident named Wave, a war hammer named Whelm, and a sword named Blackrazor (all three were introduced in this adventure).", this adventure puts the PC's in the cross hairs of danger where they belong. "It is also the favorite adventure of Wired magazine's Ken Denmead, who described it as the "amusement park of dungeons", & this comment is where we're going to kick things off. Because with a bit of clever dungeon mastering S2 can be moved lock, stock, and puzzles right over to your favorite campaign world in this case Hyperborea. Why Hyperborea? Well last night I got into a discussion with one of my players. What was Hyperborea like before the Green Death? The high level weirdness and puzzles of White Plume Mountain for me answer the question. A decedent adventure location that has been taken over by wizards & all sorts over the centuries. But what does this have to do with domain level play? Everything really. S2 is the ultimate expression of the fun house dungeon with a ton of intimidating monster encounters. There are several reasons for this.

Why? Because the entire module is built around that premise. Its built to quite literally rip PC's apart. "The recommended number of players is four to ten, with levels ranging from fifth to tenth." This is a convention level group of players but many times over the years I heard of groups of smaller players completing the adventure. How? By taking the parts and pieces of S2 apart and dealing with the parts rather then the whole over time of game play. In other words using S2 as an episodic television series type of game. Which brings me to the domain element of S2 White Plume Mountain, this adventure is dungeon creator Keraptis the 1,300-year-old wizard's front & back yard there's whole range of other high level horrors living within the adventure location. This is because in Adventurer, Conqueror, King terms S2 White Plume Mountain is a sink of evil in the worst way possible. If you've been paying attention to the Heroic Fantasy & Barbarian Conquerors Collection Kickstarter then you've been seeing some of the leaked updates that Autarch has put out then you know exactly what I'm talking about. Sacrilege is going to be the cry from certain corners of the OSR but hear me out here. "White Plume Mountain" is very loosely connected to Greyhawk & given the amount of weirdness of the place I've used it as a mini domain of fairy multiple times.
This one is a favorite of mine because the Great Swamp, White Plume Mountain, and Castle Mukos didn't match up with anything else within Greyhawk though the text of the adventure clearly places White Plume Mountain in the Shield Lands, near the Great Rift. It can easily be moved where the DM needs it go. I've even seen a customization or two place White Plume within a fantasy version of Iceland and Greenland for a game of Lamentations of the Flame Princess. I could also see using White Plume as a part of a very gritty and dangerous Dark Albion campaign. Hence why I've said that it works for domain level play.

There are several reasons why S2 White Plume Mountains works for sword & sorcery style play:
Posted by Needles at 8:22 AM