Tonight's Thundarr game was different, very different from others in the past. I didn't have a ton of time to get prepared and so I thought that tonight I might use some of  the resources at my disposal to run a Fantastic Heroes and Witchery rpg one shot using the Mutant Future Thundarr The Barbarian source book by Tim Snider as the basis for this one shot game along with incorporating the Metamorphica for the mutations I was going to use for the PC's.
This was going to be a much more mature game then the other one shot I ran.

For tonight's Fantastic Heroes and Witchery one shot I paid special attention to the review that Venger Satanis had for the game and allowed plenty of time for a character workshop with the players. The game has a fantastic number of options available. The Thundarr The Barbarian source book allowed me a bench mark. Because of the nature of Fantastic Heroes & Witchery rpg's science fiction, fantasy, and weird adventure PC creation details. This was a very popular option in tonight's game.  The Fantastic Heroes and Witchery rpg rule book is available for free right HERE 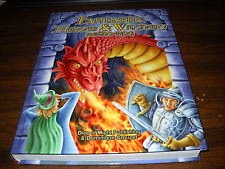 There were two further optional rules packages that are available from the FH&W website that were on the table tonight one was  Pulp Adventures pdf and the other was the  Rayguns, Rocketships & Robots both by James Cast. Available right over HERE
After a long evening of dice rolling, character creation, rule clearification & discussion, and more dice rolling we got down to business.

The party ended up being a mix of fantasy,pulp, and science fictional style characters. There were six players in tonight's game and a mix of the weird as well as strange.
John - Ravaor The Fierce -  Human Barbarian 5th level
Jennifer - Jenna Darklock Witchling Occultist The Veiled One
Peter - Harry Colgate - 4th level Hobbit Thief armed with a laser pistol, throwing daggers, and a short sword
Paula's 5th level rifleman Terran with light telepathic powers armed with a laser pistol, rifle and a tracker. She was a hunter from a domed city ala Logan's Run after a mutant warlord.
Craig's 4th level Apeman Figher Tago an escaped wizard's slave with a vendetta now doing mercenary work. Short sword, crossbow, and small shield
Rick's Shocho The Mok 3rd level Barbarian armed with a parking meter and extraordinary strength.
Ryan's 6th level wizard Zarus The Black Dark Magician of  Tor - A mercenary magician of extraordinary ability who escaped the slave pits of his god master Tor, losing an eye in the process but gaining valuable insights as mutation ravaged his body.

These fools erm adventurers were summoned to Flag Staff by the Sorcerer Ramos to seek out an old military base deep in the old national park wasteland. The 'Medicine Chest' was a cutting edge military medical R&D facility that was in use in 1994 when the runnaway comet hurled between the Earth & the moon.
The PC's were summoned to Ramo's summer house tower just outside of the city.

Ramos gave an outline of the reason for the PC's intervention into the Flag Staff territory. Plague was affecting the city and the PC's were needed to recover a cure from the facility. They would be paid 20,000 in gold and allowed to keep any artifacts that they find.
The PC's were provided with maps, pass codes, and other material by the sorcerer.
Tim Snider's excellent free Thundarr Sourcebook for Mutant Future
The Petrified Forest and Wastes

The ride into the former national park was impressive and quite dangerous as the party dealt first with a gang of murderous mutant Orc raiders in relic cars and then a wizard's pet robot monster.
The party had a bit of a rough time of it. But came through alright except for one of the PC's mutant horses who got the rough end of it. After slaughtering the horse and smoking the resulting meat. The PC's headed into the wastes were quite deep in when they finally made the base.
They went to break into the bunkers that lead underground and disturbed the nest of some giant scorpions!

After a very harrowing fight the nest of ten scorpions bit the dust but it was a very close fight. The PC's put their hobbit thief to work using codes given to him by the sorcerer. The giant vault doors of the 'Medicine Chest' swung open revealing a massive interior and more secrets of the ancients.

Massive hallways, strange laboratories, and weird sights greeted the PC's.
And then they saw the rows and rows of cyogenic pods all filled with people from every age of human history.
The PC's weren't happy at all. There were people from every age of humanity. What was going on here?
The PC's broke into a medical laboratory and found some very interesting and potentially dangerous relics and artifacts.
The PC's had a run in with a deranged surgical bot armed with a laser scalpel and a tranquilizer gun.

The PC's decided to awaken one of the sleepers. They successfully awakened one of the sleeping beauties and while the sleeper was groggy and half conscious.
The PC's heard the sound of foot steps coming down the hallway and decided to hide. It sounded like a massive amount of beings coming?
They were confronted by a group of androids of terrible aspect. All heavily armed with energy weapons.

The PC's hid in a store room for the moment and are deciding to confront the Andies or let them pass.
Which means this is going to be continued next week!

For tonight's FH&W rpg game I pulled on lots of material to fill in the gaps.
The reason that I didn't use Mutant Future in tonight's game isn't because I don't like Mutant Future but because I've been dying to see the Fantastic Heroes and Witchery system in a science fantasy setting for months.
The cryogenic facility's inmates in the section that the PC's were in was drawn from Fishwife Game's 100 Male Inmates available right HERE

The idea here being that the PC's had stumbled into a section of the facility where the prisoners were experimental subjects for the military as things got even more desperate as time went on.

The artifacts in tonight's game came from

Skirmisher Publishing.
This issue provided to be invaluable with the vast array of weird and wonderful medical artifacts which while geared for Mutant Future can easily be adapted to other post apocalyptic and old school venues.

This brings us to the pay what you'd like resource the Metamorphica a system neutral old school listing for all things mutation. This book is fantastic, it covers mutations across the spectrum for all kinds of genres and its available over on Drivethru rpg.

There is a ton more information about this book right HERE


Tonight's game was an exercise in using OSR systems across the board and was very interesting from a number of points I can't wait to get into the next session next week.
Cheers!

Picture by Moondigger
Posted by Needles at 11:26 PM