The Crypt Ape is hold over out of the long forgotten lost world of Atlantis &  Hyperborea during the fall of one of the cycles of the Earth. These horrors survived as ancient guardians for the crypts of certain powerful kings and sorcerers, tribes of these things were given over to dangerous and horrid rites of powerful magics.
These horrors are not a species of primate at all but a magically created monsters who drift into undeath as the centuries roll on. These monsters are actually human beings whose minds are wiped leaving only the base  psychotic aggression and whose souls are warped by dark magics.
These rites of darkness were developed by black magicians back before the last Ice Age of Earth. They were and are used by certain terrible cults to guard tombs,crypts,and other important areas of occult importance.
They possess an incredible cunning and above average intelligence then their animal like appearance would suggest. They have an incredible  appetite for human flesh and reveal in any opportunity to consume it.
However they can enter a state of deathlike sleep for hundreds of years and awaken at a moment's notice to violence.
Crypt Ape

Crypt Apes have been used for centuries to guard the underground lairs of cults, sorcerers, and other wizards who use the rites found within occult tomes and scrolls that pertain to the Great Old Ones & the Outer Gods. These horrors have deep connections to Ithaqua in the form of the Wendigo whose near divine energies are called down upon the victim when these monsters are created. The deathly horrid winds that blow through The Outer Darkness and the Negative Material are directed by Ithaqua in the rites of creation of these beastly monsters. Men and women's souls are consumed by the winds and these horrors evolve from the remaining beasts.
The rites of the creation for these beasts were drawn from the tribes of  the Gnophkehs more on them HERE . The Crypt Apes are still used by certain  branches of the cults of the Old Ones and have a long as well as storied history connected with the Wendigo legends. Cults turning victims into Crypt Apes have been encountered as far away as Canada, Green land, Iceland, Russia, Siberia,  & Antarctica as well as other places including the inner Earth.

Because of their connection to Gnophkehs may native peoples consider to even speak of the monsters as taboo and they will be destroyed as soon as found. The rites of their creation are secreted among certain occultists as some of the deepest secrets. A seventh level magician or better is needed to call down the dark forces of the occult to even create such beasts.
The papyrus reputedly preserved the darkest secrets of the occult wisdom of the detested Gnophkehs, which name denoted the repulsively hirsute cannibals whom Yhemog's ancestors had driven into exile in the arctic barrens. This scroll contained, in fact, the most arcane and potent ceremonials whereby the Gnophkehs had worshipped [sic] their atrocious divinity, who was no less than an avatar of the cosmic obscenity Rhan-Tegoth, and was attributed to Morloc himself, the Grand Shaman.


— Lin Carter and Clark Ashton Smith, "The Scroll of Morloc"

In 1834 the Black River expedition of George Beck's party stumbled upon a holding cell of a pack of these horrors and after a bloody episode. Two of the beasts was trapped and packed up and sent to a New York State university. The other was sent to Arkham where it was extensively studied and then destroyed during year 1836. Beck burned all references, notes, and journals pertaining to the incident.

The connection between John Ross's expedition's disappearance and the secrets that George Beck uncovered are only known today. The final extermination of the rites and survivals of the the detested Gnophkehs can be only today laid at the feet of John Ross. The Crypt Ape however remains to be devil investigators, adventurers and occultists throughout history. Details on Ross's Expediation are right over HERE

The Crypt Apes are some of the most dangerous undead horrors an adventurer can face and can sleep in their undeath state for centuries only to awaken from their slumber at a moment's notice. They dwell in cramped and sometimes seemingly too small spaces where they slumber the centuries away. They attack quickly with powerful claws, and a toothsome bite. They prefer live bloody prey and mankind is always the favored food.
Certain lost  rites of the Algonquian people can drive or hold the beasts at bay. Clerics may turn them if they are familiar with the undead nature of the beasts. As undead they have all of the standard immunies to charm, sleep, and mind effecting powers. They are cagey, intelligent, and retain a sort of higher then average intelligence as well as a supernatural thirst for human flesh. They have all of the standard regenerations abilities that are found among certain types of Yeti and Wendigo creatures. Height varies according to the conditions of the transformation spell and local conditions. The Crypt Ape is very territorial and protective of its lair, often these horrors sometimes use crates, coffins, or other box like constructions to sleep or lair in. These can sometimes be found in the dungeons where these horrors lair.
Extreme caution should be exercised when dealing with these mad violent bastards. 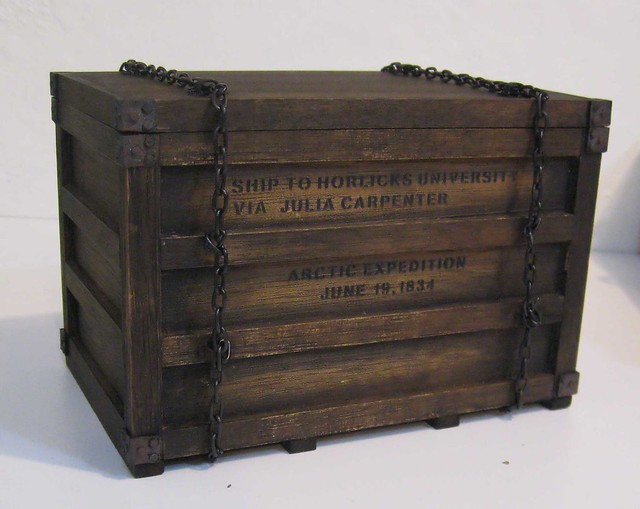 Rite of the Crypt Ape
A Seventh Level Necormatic Spell
1d10 hours casting time.
For this spell ancient and half forgotten about fungas is grown among certain sea caverns usually near a body of fresh or salt water. The necotic rite requires that the fungus be turned into a gruel using human flesh as the base and then let stand for sixty days in a sack of human flesh.
The gruel is then boiled in water and the resulting soup fed to the victims. The magician can create 1d6 crypt apes by calling down the Wind Walker to direct the divine winds of the Outer Darkness which bares the negative energies into the souls of its victims. The victims are magically transformed into the apes as their souls ebb away and only the violence and horror of the insane rite remains. The magician must make a charisma roll to command these mad bastards or  be torn limb from limb by the resulting horrors!
Should he succeed there is a 10% chance that Itaqua himself may take the resulting horrors for himself as minions. This rite must be cast at three am under the full moon in November.