So for a long while now I've been quietly been looking into a wide variety of campaign ideas for The Fantastic Heroes and Witchery retroclone rpg system. Post Apocalyptic gaming mixed with AD&D 1st edition style adventures appeal to me a great deal but really what is going to appeal to a wide range of players & keep em coming back to the table.
Mash up franchise ideas and artwork seems to be all the rage these days & then it hit me whist going over tee shirt designs tonight from the Tee Villain site.
A mash up of Doom and the Bruce Campbell movie Army Of Darkness!
But surely there isn't anyway of doing this at all? Actually there is and its free.
'&' magazine issue number # 7 has all of the tools that you'll need including a kick ass write up on all of the equipment and monsters for 'Doom' all statted up for your convenience for free. The whole issue is one giant mass of DYI retroclone coolness just waiting for you to download.

Right over
HERE
In fact all of the hard work for your parties is completely done, except for a party. There are number of options already out in pop culture. And once again the tee shirt villain site provided more mash up inspiration with another kick ass design from Jimiyo whose sublime artwork captures so much of the kick assness of the pop culture material he references.
With the Necronmicon Ex Morta on tap there are plenty of time/space hi jinks that can be introduced. The sky is pretty much the limit for dealing with any number of deadites entering into a world or campaign.
Doom is certainly primed for a crossover with the world of Evil Dead.
There are numerous reasons for this including a tie in with the events of Doom II Hell on Earth HERE

There are also a number of areas primed for a cross over with a party of adventurers who don't even have to have a single interaction with Ash and Co. at all. There have been several setting elements and story crossovers with comic book series with the main  catalyst has been the Evil Dead version of the Necronomicon. A party of adventurers is going to need to be very well versed in how to deal with undead and especially Deadites who seem to be just a wee bit more intelligent and dangerous then the run of the mill zombies.
I've actually run several one shots using AD&D 1st edition and the Army of Darkness in the past with some pretty high PC body counts and the big issue with dealing with these sorts of adventure one shots  is the amount of trouble that the PC's can generate that can turn into full blown campaigns. Not that this is a problem if that's what the DM is aiming for.
There are numerous weaving backwards and forwards across the planes that can cause numerous issues.

My friend Michael Tresca has another option for doing a campaign with a D20 free source book that has a variation on the usual campaign cross over with Swallow This!

And even though its D20, this is a very easy conversion if your familiar with the ins and outs of D20 to first edition AD&D style games.

Grab It Right
HERE
It's the 1990s and the Book of the Dead has just become the New York Time's bestseller. Oprah recommends it. Of course, Oprah's a deadite twin, but she was on TV long enough to tell the gullible masses about how great a book about sacrificing people to demons is. And of course, said gullible masses lap it up like the tripe-reading sheep they are.
One reading of the book caused mass havoc at Knowby's cabin and left several people dead. Imagine kids and adults everywhere reading the book out loud and opening portals to hell all across the globe.
The heroes have their work cut out for them and a variety of implements to cut with, including knives, axes, and chainsaws. Reality is a living hell - literally. But there's a catch.
The book has been used to summon demons, but it's also been used to send them back. If the PCs can just discover the right spell to send them backwards in time from the original book, they might have a chance to stop the madness before it starts.
If you've ever screamed, "Why don't you get a gun and SHOOT IT!" at the pathetic victims of any horror movie...this is the game for you.
Evil Dead: Swallow This! contains 2 new professions, 7 new uses for skills, 11 new feats, dozens of deadite-hunting equipment, 17 new spells, madness and time travel rules, 5 FX items, and 16 deadites to slay with.
This really is a fantastic free source book of a whole host of ideas that can easily be cut and pasted into a serviceable AD&D style Army of Darkness mash up campaign.
The backdrop can even be used as yet another alternative Earth for the party to play on. Michael really did his home work with this source book. Grab it and see.

So why Fantastic Heroes and Witchery as the basis for such a one shot? Well besides the fact that it hands numerous campaign options and classes. The chaos vs law war backdrop built into the game and the numerous Yog Shagothery elements floating in the background? 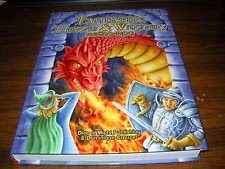 Combat,magic, and other elements of this retroclone system allow a DM to really emulate a wide variety of the feel and color of the Doom and Army of Darkness setting, elements, and whatnot with little to no problem. Then there is the numerous resources that the author has laid out for the DM as well grab this one right over HERE

Note that this post is for educational & entertainment purposes only, there is no copyright or trade mark violations intended here. Especially the artist Jimiyo's creations whom the author admires a great deal. I will be getting those tee shirts very soon.
The characters, setting,etc. are the product of their creators and the exceptional artists who brought this wonderful series to life.
Posted by Needles at 10:28 PM