Grab It
HERE
Adventurers and reprobate heroes are likely to run across random and somewhat dangerous items that seem to be attracted by the floats om and jetsam  of Voivodja. The place is a whirl pool of hoary and dangerously imaginative evocative weirdness that picks up on the collective unconsciousness of the fairy tale like madness of the place and its vampire faction inhabitants. Here then are a chart of 1d10 bits and pieces of strange, unusual, sometimes destructive items that are found along the fairy pathways, roads, and worse as you make your way to the lands of the high weird.

1d10 Random Finds From Across Space And The Planes Table

These types of treasure will most likely have weird and strange guardians nearby to destroy any interlopers into the realm of Voivodja. The undead hordes will try to stay one step ahead of  adventurers who come into possession of these items. 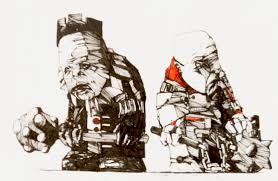