Fairytales are massive parts of the human unconsciousness that we take on as children and realize just how nightmarish and dangerous they are as adults. We look back and we're thankful that we survive the experience.
Which brings us to A Red and Pleasant Land and its use as fodder for expansion into a whole cloth campaign and adventure campaign setting.

I came across Handy Haversack's review of A Red And Pleasant Land on Dragon's foot's forums which had some very interesting and valid points as well as a revelation.  You can read it HERE
Here's the bit of the review that got me right between the eyes:

"The front endpapers of the print book (or two printable pages in the PDF) show the map of Voivodja, bounded north and east by the Carpathian Mountains, west and south by the Terrible Goblin Woods. These, of course, mean that you can tuck the Place of Unreason pretty much anywhere on your campaign map. The map here is about 300 miles by 400 miles, though the area between the boundary terrain is more like 200 by 300. I think that in practice this could probably be scaled down (e.g., I'm thinking of placing it in the Valley of Mists on the Hyperborea map for Astonishing Swordsmen and Sorcerers of Hyperborea). Also, because of the nature of the place, Voivodja does not have to take up as much space on your "real world" campaign map as it does on its own. Voivodja is strange. Time and space and manners and emotions and laws and gravity and loyalty can all be subjective here, sometimes all at once. Don't worry. There are tables for this."
And just like that I hadn't even thought about using A Red and Pleasant Land with Astonishing Swordsmen and Sorcerers. My mind was awash with possibilities of  Voivodja  and its twisted vampire factions. The whole setting is rotten with Vampires. If they could be connected with AS&SH where else might they be connected into? Carcosa perhaps? But how does Lost Carcosa connect with Voivodja ? 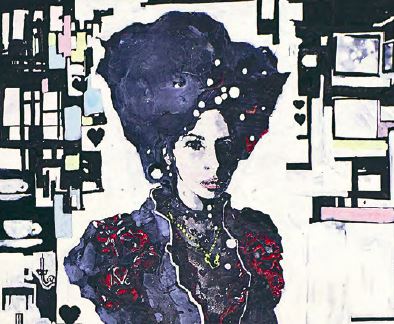 I began to think about the twisted fairy tale setting and its vampires? How were they connected with Old Earth? Are they the remains of some Old Earth colony that became twisted by  Voivodja's essence in the distant past or some dim future? I thought about Clark Aston Smith's Hyperborean Cycle (found HERE) and his other creation of Zothique.

Zothique really holds the answer to my perplexing and vexing question. How to connect Carcosa and Voivodja? According to Clark Aston Smith:

Zothique, vaguely suggested by Theosophic theories about past and future continents, is the last inhabited continent of earth. The continents of our present cycle have sunken, perhaps several times. Some have remained submerged; others have re-risen, partially, and re-arranged themselves. Zothique, as I conceive it, comprises Asia Minor, Arabia, Persia, India, parts of northern and eastern Africa, and much of the Indonesian archipelago. A new Australia exists somewhere to the south. To the west, there are only a few known islands, such as Naat, in which the black cannibals survive. To the north, are immense unexplored deserts; to the east, an immense unvoyaged sea. The peoples are mainly of Aryan or Semitic descent; but there is a negro kingdom (Ilcar) in the north- west; and scattered blacks are found throughout the other countries, mainly in palace-harems. In the southern islands survive vestiges of Indonesian or Malayan races. The science and machinery of our present civilization have long been forgotten, together with our present religions. But many gods are worshipped; and sorcery and demonism prevail again as in ancient days. Oars and sails alone are used by mariners. There are no fire-arms—only the bows, arrows, swords, javelins, etc. of antiquity. The chief language spoken (of which I have provided examples in an unpublished drama) is based on Indo-European roots and is highly inflected, like Sanskrit, Greek and Latin.
Clark Ashton Smith himself described the Zothique cycle in a letter to L. Sprague de Camp, dated November 3, 1953.
Darrell Schweitzer suggests the idea of writing about a far future land may have come from William Hope Hodgson's novel The Night Land, noting that Smith was an admirer of Hodgson's work.
More right over HERE
This campaign revolves around very old and very strange planes, worlds, timelines, all part of a Plane & Time War fought across alternative worlds and dimensions where time and space intersect.

Sometime in the future the powers of Quas, Misrule, and Unreason fight a protracted war against the forces of  Law, Order, Reason and the very gods themselves against the backdrop of the ultimate saga of a perishing cosmos.

The very fabric of time its rife with holes and man's kingdoms are strange, old, weird,and the PC's are drawn into the middle of it all.
Hyperborea, Voivodja, Carcosa, The Unknown Island, The Night Lands, etc are all worlds connected across branches of pseudo European timelines. Time is not an arrow but a river full of eddies and branches fought over by monsters, gods, demons, and more.
More to come folks.