The Bee
'The Bee's is a perfect adventurer's vehicle able to fit four wasteland warriors in comfort and style with plenty of trunk room for weapons, gear, and a bit of camping equipment. The Air car was originally a gas engine affair but towards the end of its production run it was refitted out with an atomic battery cell. These cells while virtually able to last a hundred years or more with a good charge none the less will explode for 6d6 points of damage plus a radiation check as well. The Air car then becomes a minor radiation hazard to those around it within 400 yards. These cars then have to be taken up on a lift with a radiation suit and clean area to have the atomic battery changed out. A four hour job at minimum requiring some specialized equipment that most major garages from this world were equipped with. 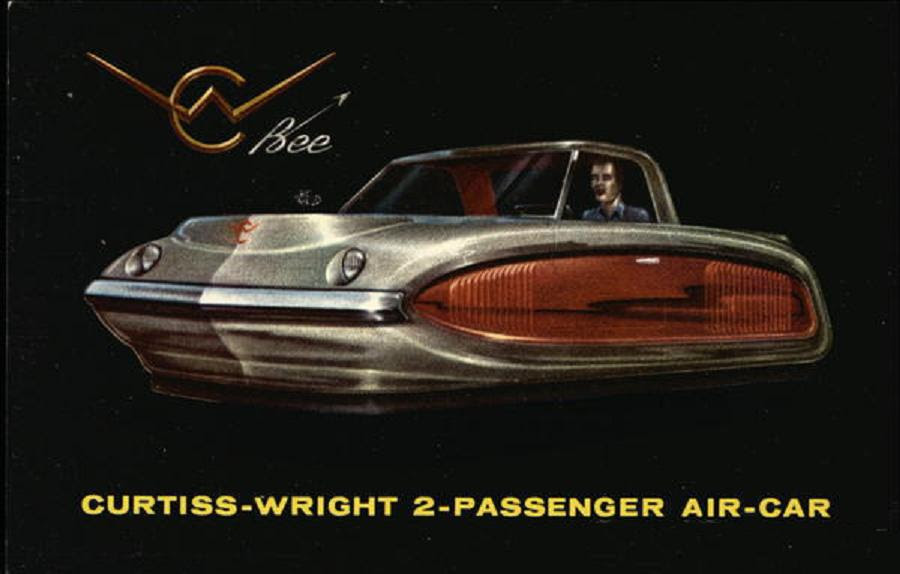 Many adventures and gangs have taken to collecting the 'Bees' that fall through time holes from AH^69 the alternative Earth's from which these craft hail. They are often given over to super science artificers/mechanics  who run lines and install ammo drums within ample body's of the Air Cars fitting them with twin mounted machine guns capable of doing 2d8 points of damage. Many times these weapons can retract under the head lights allowing for a fully functioning headlight and machine gun combination.

The Curtiss- Wright Bee 2 Passenger Air Car are now sought out by certain Air Car collectors who admire the car's ability to go over water, mud, rough ground, and more with little penalties in handling. Some artifact collectors pay handsomely for these rare trans world wasteland finds. Many times adventurers seek out the atomically optioned powered Air Cars for their reliability, space, and power options.
Posted by Needles at 11:10 PM