Deep in the Death lands are certain finds that can be very deadly to adventurers, some of these items come attached to owners who will stop at nothing to track down their 'treasures', here are a few of these interesting and potentially deadly items of the wastes. Things that can change the lives of those adventurers whom they touch and run across.
Don't forget to check for contamination and ruin. 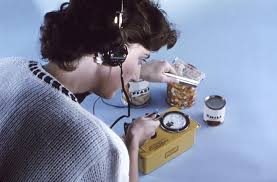 1d10 New and Deadly Finds Table
From the Death Lands
Posted by Needles at 10:29 PM