Zebulara is an Outskirt demi plane realm that has been created from the debris and remains of mankind's dreams and memories of Christmas's past lost to the collective unconsciousness of humanity's memory from the Nineteen Hundreds through the present seen through the eyes of a Holiday Christmas special from classic television. At least in the beginning of a visit. This demi plane actively hunts and sucks in adventurers as well as heroes from across time and space. A strange candy can colored vortex is often the first and only warning of  Zebulara's dimensional trap springing upon PC's. The dimensional vortex opens near the PC's and Dex checks are needed just to avoid the debris and what not that will try to knock characters out. They will awaken upon Zebulara. 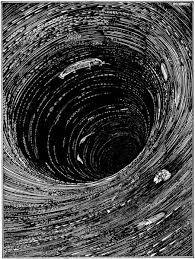 The realm takes the form of a small town achingly familiar to hearts and minds who view it for the first time. A realm that seems like home from every holiday special, Christmas morning, and dream of Christmas past. And this is part of its insidious Fey glamour. Zebulara is a lost realm originally a small pocket universe left over as a battle ground between the good and evil fairy races long, long, ago. The realm was picked up and dusted off by the Almadora or the 'Murder elves' as their called. A twisted tribe of psychopathic fey who collect, steal, and create every plastic memory and dream of Christmas they can get their grubby little hands on. The Almordora are no longer the only powers that control the plane, dark forces from across the fey realms. This suits the Almordora just fine.
Zebulara has a very long Christmas night that last's almost eighteen hours. The wintry realm is always blanked by snow and ice as the sun sets and people hurriedly flee into their homes. Its always a commercially laden Christmas here driven by large toy manufacturing corporations. These corporations are responsible for creating incredibly expensive and dangerous toys. These corporate entities are always controlled by an undead or lich overlord selected by the dark fey Immortals of the realm. Often evil 'Gnome' barons are in charge of some of the manufacturing base. As folks toil away all year to afford the 'gifts', the psychic energies released by the rush and bustle help to grease the maintenance of this plane. The small town USA nature of the plane is indicative of the Nineteen Thirties through Fifties of television specials, movies, etc. but which ones can't be identified.
Christmas night is divided into phases and many dangerous horrors are released upon the plane to hunt, kill, and murder during the darkest hours. Many of these horrors come especially for the violence and mayhem that the plane provides and are summoned by deep & dangerous small town cults across the plane. They are released into the land to do their worst. Most bolt and lock their doors at this time but many residents are magically unaware of the mayhem taking place right under their collective noses.
Many travelers from post apocalyptic wastelands,D&D style worlds, and many others are snared by this demi plane. The illusions and glamours of its Fey forces can be very disconcerting and dangerous. Memories, dreams, and wishes are the dross of these 'dark forces' which help to fuel the plane.
PC's caught within Zebulara often learn very quickly to blend in as best they can. Spells, etc. all function as normal but leaving is very tricky as the plane's 'dark forces' often trick, use illusions, and create glamours to force PC's to stay on in the plane. Their terror,frustrations, fear, etc. all adds more fuel for the place like a furnace taking in coal. Illusionists will find their spells have a much longer duration here and saves against such things are -1 on all saves. Many illusionists are seduced by the 'fey immortals' into staying and becoming part of the machinery of this demi plane. They are often inducted into lodges called 'workshops' where they are taught the inner dark secrets of the demi plane.

Zebulara is not without its light though for each Christmas morning those who survive the night go their temples of light to revel and open their 'gifts'. The magic and satisfaction of these min treasures is fleeing at best and after ten to thirty days many of these gifts are returned to the shops or discarded. Clever adventurers have often waited for this period to pass and claim some of these Fey created treasures for themselves. Often these pieces of Fey magic are found no where else among the multiverse and the incredible illusion and lust magic reacts far better on others then the some what jaded and drained inhabitants of Zebulara.
There are literally thousands of temples of light strewn across the demi plane where patrons may worship but trying to leave this place is a divine effort.
The cycle of the demi plane follows a seventy two day cycle until the night of Twisted Christmas comes. The cycle of work of the inhabitants is exhausting until the blood soaked event happens. The let down afterwards helps to fuel the next cycle of frantic activity. On Zebulara there is no reason for the season and for eons Christmas gods and saints have been trying to destroy the place. But like a troll it regenerates itself, even if all were freed from Zebulara, as long it lived on in one mind's dream it would eventually recreate itself.
Random Encounter Table For
Zebulara - The Twisted Christmas Demi plane
1d10 Random  Gifts & Treasures of Zebulara