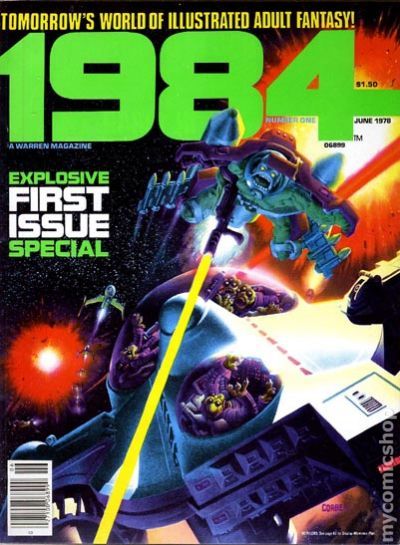 1984 came out a year before the film Alien and offered a sort of window into what seemed to be in the air back in the 1970's in comics and films. The pulp and 1950's science fiction pop culture landscape had given way to the used and lived in universe of the collective unconsciousness. A vibe violently seen in the Alien and less so in the fantasies of  Star Wars. Images bathed in the science fiction and fantasy of Seventies Hollywood and smack in the middle of this whole iconic morass of  science fictional dreams was 1984 from Warren publishing.
Issue one contains a boat of mixed Seventies science fantasy goodness. This mag was written to compete with Metal Hurlant and the American Heavy Metal magazine, which although it couldn't hold a candle to made a pretty damn good stab at. Issue one contains a number of pieces that will interest the science fiction and fantasy retro clone gamer. They're a definite pessimistic science fantasy vibe from the Seventies here, each story has the bombs and super weapons going off and vaporizing Earth. So for you Mutant Future players who want to get your campaigns into space. Here's a solid way of doing it.
The stories go like this :
Last of the Great Joy Juice is a mixed bag tale with some really sleazy elements lurking in the background. The type of a story that can be added into the background of a retroclone like Star Ships and Space Men with little issue. There's some nice art and mix of mutant and near humans in this one.
Saga Of Honey Dew Melons is a sexist commentary tale that can happen in any sleazy backwater space bar in spades. This tale can have some back drop history with your favorite post apocalyptic wasteland quite easily.
Once Upon Clarissa is pretty interesting and there are several plot lines that could be added into your favorite space based retroclone quite nicely.
Quick Cut - This is a mix of fantasy and post apocalpytic hi jinks all the way, there's a Ralph Bakshi Wizard's vibe echoing throughout this tale.
The Saga Of Xatz And Xotz is nicely done with some elements that can be borrowed for your old school favorite sagas in space rather nicely.
Bugs is a pure throwback tale that could be added into the backdrop of a space opera retroclone adventure
Mutant World begins here are and this is pure post apocalyptic inspiration all the way through for Mutant Future or Gamma clone dreams. Take a look at this one for wasteland ideas.
Faster Then Light has excellent artwork and a good space based backdrop for a space opera tale or adventure.
Angel has a slightly errie quality to it and the artwork makes the tale.
Momma can you hear me is one of those little tales that can be added to bother a party in a space opera and let it echo through a campaign during play.


I remember walking into Maxwell's drug store back in 1978 in downtown Torrirngton and seeing the above vividly lurid artwork. I didn't have the dollar fifty at the time to get it. But years later I did and its been a pretty damn controversial magazine through the years.
According to wiki right out of the gate the mag had some issues:
1984 was a black and white science-fiction comic magazine published byWarren Publishing from 1978 to 1983. 1984 was edited by Bill Dubay. The title of the magazine was changed to 1994 starting with issue 11 in February, 1980 based on a request by the estate of George Orwell.[1] The magazine ceased publication with issue 29 in February, 1983 due to the bankruptcy of Warren Publishing.
Yet artists who contributed to it reads like a whose who of Seventies and Eighties
comic book iconic artists. Again from Wiki :
Artists who contributed stories to 1984/1994 included Alex Niño, Richard Corben, Jose Gonzalez, Jose Ortiz, Frank Thorne, Esteban Maroto, Rudy Nebres, Abel Laxamana, Wally Wood, Luis Bermejo, Alfredo Alcala and Vic Catan. Cover artists included Nino, Corben, Patrick Woodroffe, Jim Laurier,Sanjulián, Jordi Penalva, H.R. Giger, Steve Fastner, Rich Larsen, Lloyd Garrison, Terry Oates and John Berkey. Writers included Dubay, Thorne, Jim Stenstrum, Jan Strnad, Rich Margopoulos, Kevin Duane, Nicola Cuti and Gerry Boudreau.

So what really did in the magazine and Warren publishing? Well the 1984/1994 magazine might have been the start of the unraveling of Warren. According to wiki they went ahead and published something that they shouldn't have :
One of the most notable incidents that occurred regarding the magazine was an unauthorized adaption of Harlan Ellison's story, "A Boy and His Dog", which has been rumored as one of the major factors in the bankruptcy of Warren Publishing. As discussed in the book The Warren Companion, editor Bill Dubay approached writers Gerry Boudreau and Jim Stenstrum about adapting science fiction stories for the magazine. Boudreau asked permission to adapt Ellison's story, and Dubay approved this, without first asking Ellison. When Ellison refused to grant permission, Dubay had artist Alex Niño draw the story anyway, then provided the art to Stenstrum to use as the basis for a new story. The story was published in issue 4, under the title 'Mondo Megillah'. Despite Stenstrum's revisions to the script, the story was still obvious plagiarism and Ellison filed a lawsuit, which he eventually won.

Warren has had its far share of sex and controversial subjects but when you alter an iconic comic book icon's art well you might be walking on thin ice. Especially when that comic book legend happens to be loved Wally Wood. Once again from Wiki :


As discussed by comics historian Richard Arndt, editor DuBay edited stories within the magazine to focus more on this subject matter, such as this incident that occurred with artist Wally Woodregarding stories that appeared in the first two issues of the magazine:

Wood's original story was entitled 'The End' and was 12 pages long. It was a part of his Wizard King series. Bill DuBay, without Wood's ok or knowledge, split the story in two, rearranged pages & panels, rewrote Wood's original script and presented the greatly altered work as two separate stories, changing Wood's original rather charming adult oriented tale into shorter pieces that leaned heavily on the scenes (which were also in Wood's original but not nearly so highlighted as their appearance here) of naked women in bondage being whipped and brutalized. Understandably, Wood was outraged and never worked for Warren again.

Want to know more about 1984/1994? Check out the wiki page HERE
As well as the Richard J.Arndt interviews HERE
Posted by Needles at 9:35 AM