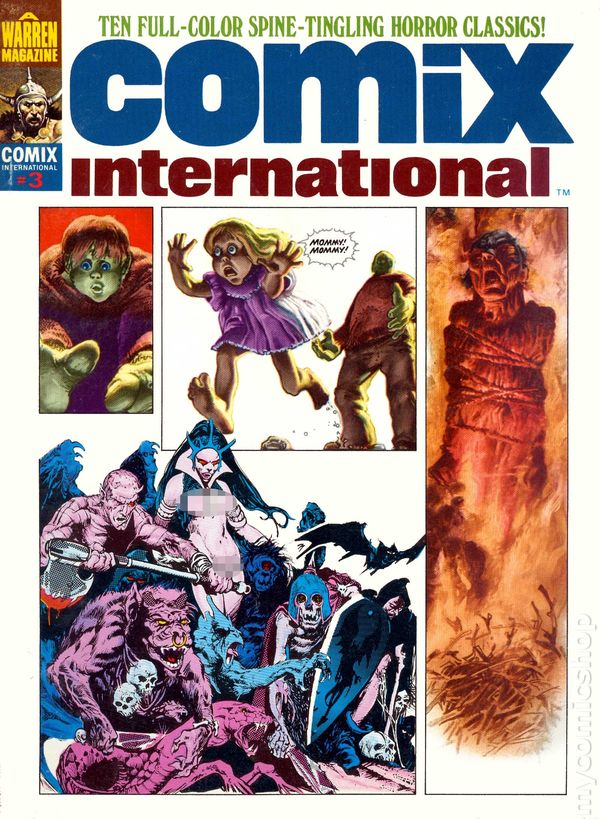 Download It Right Over
HERE
Comix International was a short-lived magazine comprised entirely of reprinted material (in color) from other Warren publications that hit the shelves in 1975. There were a wide range of reprinted stories and this issue was no different.


It featured some of Warren's top artistic talents for these tales including : Richard Corben, Esteban Maroto, Jeff Jones, Jose Bea, Doug Moench, and others.
Stories in this issue  to mine for old school games include: Child: Mind of the Mass! by Greg Potter and Richard Corben; Child: Childhood's End by Budd Lewis and Richard Corben. Child was a weird creation & one with a tragic history. He's a great example of a flesh golem and the first tale is one that high lights some of the more tragic and interesting angles from the Frankenstein legend. The second tells one of the weird ends that the Child character came to under the pen of Budd Lewis and Corben. I say one possible end because Child later popped up in the pages of Creepy and Errie. He was a strange and more then twisted character. Very strange stuff that could be easily adapted to a horror game such as Chill or a D&D style clone with easy.
Wizard Wagstaff by Jack Butterworth and Richard Corben is another Corben effort with darkly comedic undertones that might be shaped into a Weird Adventures style tale with several possible links into a fully fleshed out adventure encounter possibilities.
Hard John Apple: An Angel Shy of Hell by Jim Stenstrum and Richard Corben, this is a dark and very unPC take on the post apocalpytic wasteland tale. This is a very edgy and darkly saterical tale of a character firmly in the role of anti hero. Just the sort of NPC who would make a great villain in Mutant Future or other classic post apocalyptic wasteland adventure.
Harry by Jeff Jones; Dead Run by Jeff Jones, need a nasty magical artifact for a horror game? Here's the perfect low level one with a very nasty background. Nice art but dark tale.
A Wonderful Morning by Fernando Fernandez, ever wonder how those skeletons with all that nifty gear get to be in those caves, grottoes, etc. Here's the tale with the back story to mine for an adventure? This is one of those tales perfect for the post apocalytic wasteland.


Puppet-Player by Jose Bea, need a tale to get that Lamentations of The Flame Princess game going with a weird death connected with a supernatural backdrop to it? This is just the tale to kick things off with!  Dax the Damned: Chess by Esteban Maroto,  by Doug Moench and Esteban Maroto This is the perfect sword and sorcery one shot to mine for a one shot adventure for a D&D retroclone. Finally  Vampirella: Return Trip by Joseph Toutain and Jose Gonzalez is a perfect over the top  adventure encounter for a Carcosa or Mutant Future over arch with a weird NPC death to really throw NPC's into the deep end of things!


Rounding out this issue is a group of  artist profiles of Richard Corben, Jose Bea, Jeff Jones, and others. Cover depicts a montage of interior panels in the Seventies old school style I love so much!