Growing up, I grew up reading Gold Key's Dagar The Invincible, recently Dark Horse comics produced an exceptional hardback of the adventures of Dagar.
According to Wiki:
Tales of Sword and Sorcery Featuring Dagar the Invincible is a comic book series created by writer Donald Glut and artist Jesse Santos for Western Publishing' Gold Key Comics line.Don Glut wrote the bible for the Heman and the Masters of the Universe cartoon an wrote the mini-booklets that came with the first toys. He had nothing to do with writing the cartoon it self but it is clear his original idea for the show was a lot closer to Dagar than what aired.The basic premise of this exceptional sword and sorcery title according to wiki again :
Dagar was a sword and sorcery series, set in a mythical past of warriors and wizards. There were a few secondary characters (Durak in #7, 12, 13; Torgus in #9, 10, 13). Don Glut also tied in his other Gold Key characters such as Tragg and Doctor Spektor. In #5, Jarn, Tragg's Neanderthal brother appeared. Tragg cameoed in issue #11. In issue #13, the story actually crossed over and was concluded in issue #15 of Doctor Spektor.
I stumbled across this issue earlier this afternoon whist making preparations for the Blizzard of 2015, on the Diversions of The Groovy Kind website, one of my all time favorites.
According to blog this issue featured some awesome plot and setting elements:
Just dig issue #3 (January 1973). "Wrath of the Vampires" give us, not only vampires (duh!), but woolly mammoths, trolls, giant "bat mounts", and beautiful ladies (this issue introduces Dagar's lady-love Graylin).
You Can Read it
HERE 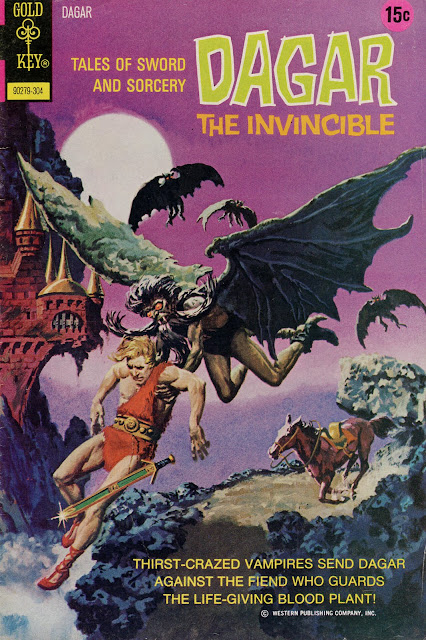 Dagar The Invincible was one of those incredibly cool sword and sorcery comic books. The world of Dagar was a product of the sword and sorcery movement of the time and very easily adapted into D&D style adventures for parties. The high level of the action means a nice challenge for a party of adventurers, the PC's are going to locked into a world where they're not the meanest or nastiest. This is a series where the characters were always challenged by the setting. Because of the nature of the self contained stories of each issue makes this a really nice series to raid for one shot adventures.

The Dell comic books were well written and the artwork was exceptional making this a nice series to clue PC's in on exactly what they'd be facing down. The wizards are particularly mean and dangerous for a sword and sorcery title. The PC's can interact with Dagar The Invincible and his quest by acting as hired muscle, join in for a one shot adventure, cross paths or foil a plot involving the skull faced wizard and Dagar never being the wiser. There are lots of potential for very cool interacts with this title.
The technology level in this series hovered between the Dark Ages and the End of the Roman Empire but there were glimmers of weird science, genetic tampering, high super science, and a bit of high stakes infernal interference.
Monsters, demons, dinosaurs, etc. were sometimes very unique and should be looked at on a one to one basis per issue once converted over for old school adventures.

Note that this post is for educational & entertainment purposes only, there is no copyright or trade mark violation intended here. The characters, setting,etc. are the product of their creators and the exceptional artists who brought this wonderful series to life.
The creations of Don Glut and Jesse Santos
Posted by Needles at 1:52 PM