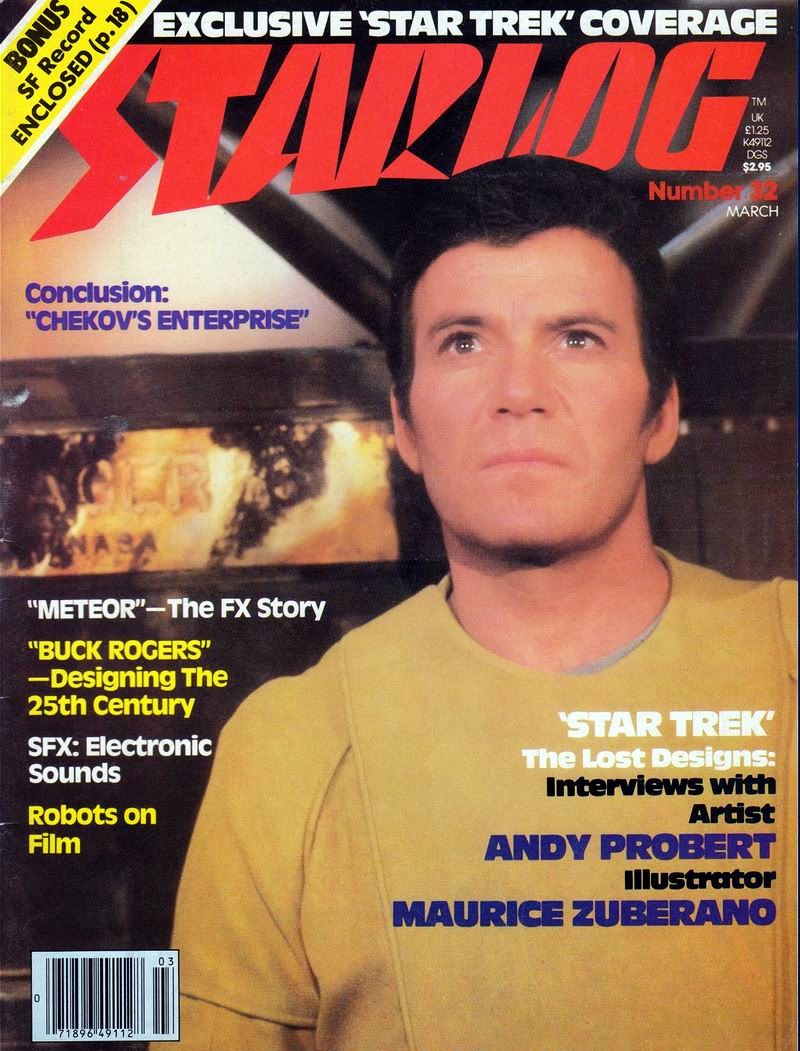 Grab It Right
HERE
Star Log Magazine was one of the 1980's power houses of science fiction back in the 80's and to many science fiction fans it was the only source of the back scenes of the workings of everything from conventions to fantasy & science fiction films.
The back story of Star Log according to Wiki :
The magazine was created by publishers Kerry O'Quinn and Norman Jacobs. O'Quinn was the magazine's editor while Jacobs ran the business side of things, dealing with typesetters, engravers and printers. They got their start in publishing creating a soap operamagazine. In the mid-1970s, O'Quinn and high school friend David Houston talked about creating a magazine that would cover science fiction films and television programs.
More on the history of Star Log Right HERE

This issue is a powerhouse and features everything for the sci fi fan whose into Star Trek to Space 1999.
Contents in this issue include -
Star Trek Maurice Zuberano Imagining The V'ger
This is a great Trek article that allows to you a look into the back drop of the entity for your OSR games.
Part XXVI Sound Effects The Electronic Age
A really nice set up for the history of science fiction sound effects and sound track from the classic movies we love.
Andy Probert Talks About The Lost Designs Of Star Trek - Want to know the history behind some of the classic bits of Trek star ships, history, and minutia behind the scenes that was reused in movies and the Next Generation series? Well this is your chance.
Meteor SFX The Tidal Wave - The famous behinds the scenes of practical special effects on one of the more not so well known classic disaster films from when practical special effects were king.
Paul Peters Art Director  For Buck Rogers In The 25th Century
Artwork and wonderfuness from the film and televsion series that's perfect for inspiration from behind the scenes of the classic television show. Really nice stuff.
Trisha Stewart Of Salvage I The Lady With Monohydrine In Her Vein
Trisha Stewart is one of those actresses who has a legacy in science fiction film and
Space Report : Mark IV Hawk
This is it! The Hawk of Space 1999 fame and one of my all time favorite star ship designs and the reason why I bought this issue way back when! An excellent old school star ship design.
Chekov's Enterprise Part III
This is a really nice look into the back drop of the Enterprise from the first movie era.
Vision Artificial Intelligence : Robots, Androids, & Cyborgs
Want to know about the motives, uses, and what not of classic era robotic monsters for your old school games? This is the article to get you going.

All in all this is a great classic era look into Star Log and I own nothing what so ever of this. This is merely a fan's commentary on what I feel is one of the most iconic magazines in science fiction and fantasy history. A classic from another era. No copyright infringement is intended nor trademark violation. God do I miss Star Log of the classic era.