Review and Commentary On Maximum Mayhem Dungeon #2: Secret Machines of the Star Spawn By Mark Taormino For Your Old School Campaigns 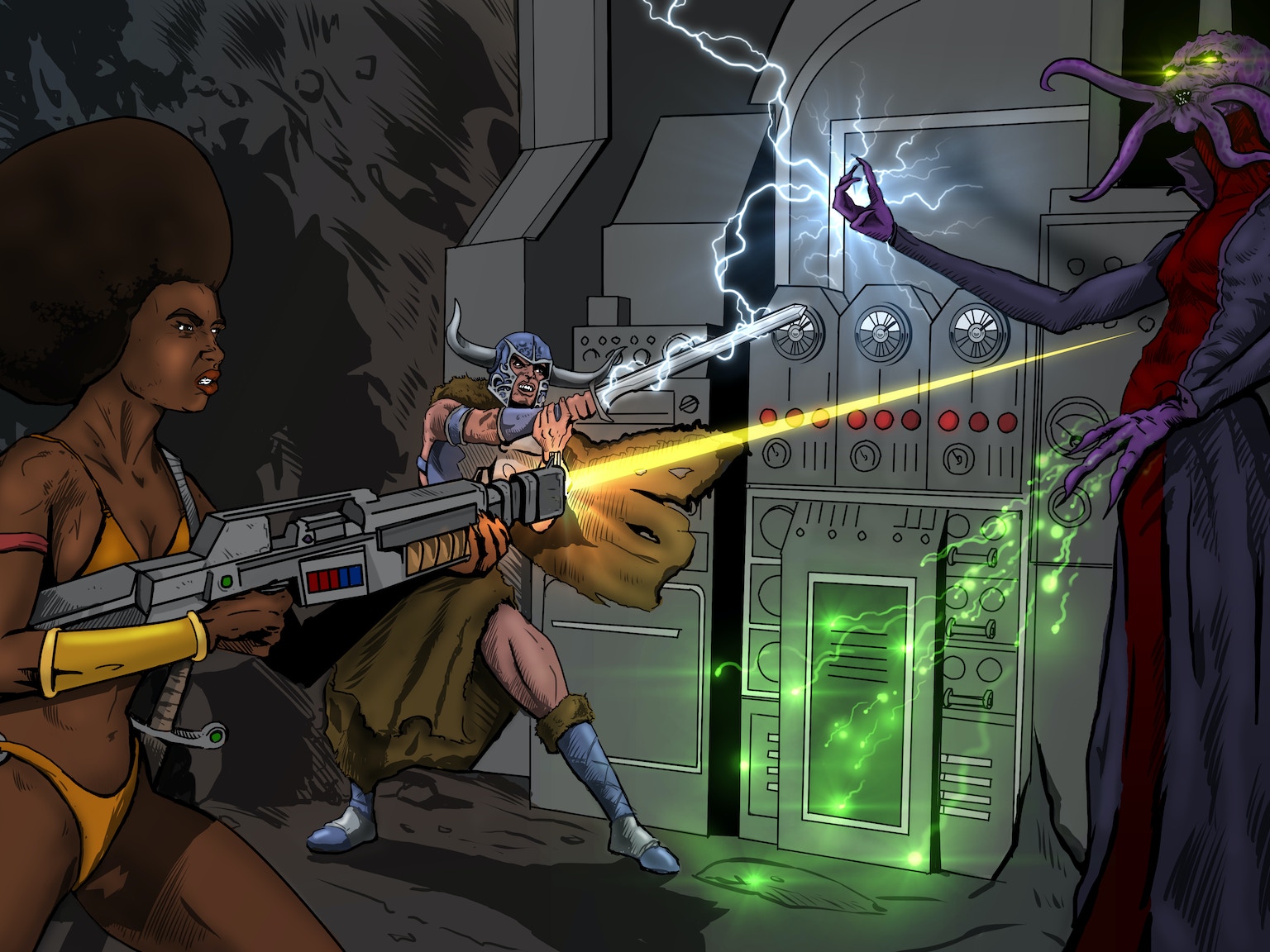 Maximum Mayhem Dungeon #2: Secret Machines of the Star Spawn By Mark Taormino just completed a successful run of a Kickstarter this morning. I've been following the progress of this module quite closely and could not wait to get my hands on this module. First things first, don't buy this module if you take your gaming too seriously. Because this is a module that is written for a DM and players who are looking for a good time in a science fantasy adventure with some very interesting damn dangerous challenges for their PC's. Make no mistake this adventure is clever and quite deadly and loaded with homages to 80's horror movies, science fiction films, and lots of ass kicking fun. I received my review copy along with the backers and so this copy of the adventure is in the raw, there's mistakes, errors,etc. which will be edited out within the final PDF that hits Drivethrurpg. The pdf clocks in at forty pages of packed adventure with a separate four page map booklet with maps and cartography by Alyssa Faden.


There is a lot going in fory pages of module, the encounters here are tight and downright demented. Seriously the author has an open ended and yet event laden approach that takes a party through the adventure logically but open ended. But what's really happening? 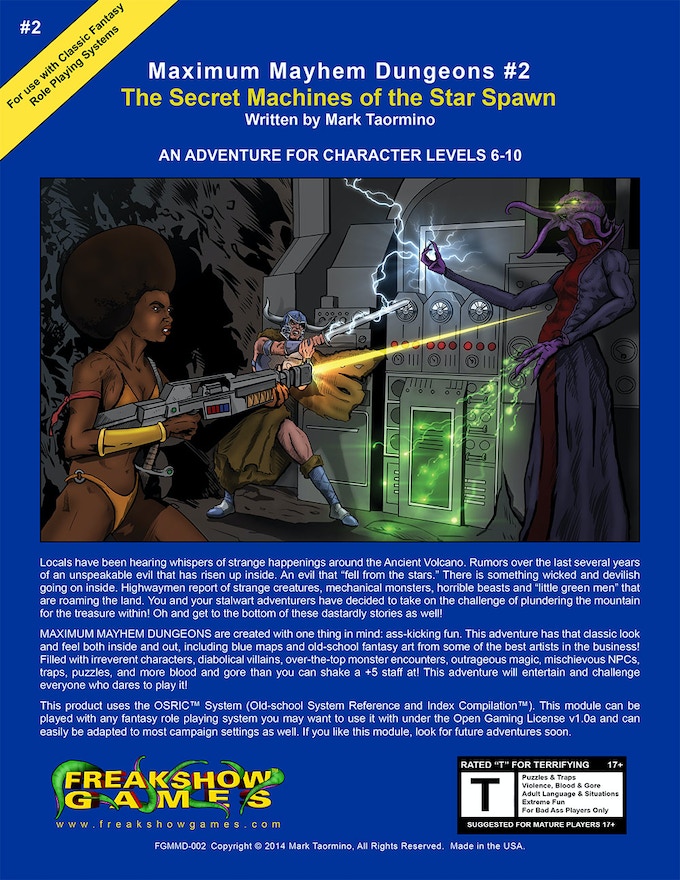 If you missed this Kickstarter you can still find out more info on how to order this product and others from our website at www.maximummayhemdungeons.com
The set up for this adventure goes something like this :
Locals have been hearing whispers of strange happenings around the Ancient Volcano. Rumors over the last few months of an unspeakable evil that has risen up inside. An evil that “fell from the stars.” They say there is something wicked and devilish going on inside. Highwaymen report of strange creatures, mechanical monsters, and "Little Green Men" that are roaming the land causing chaos and mayhem! 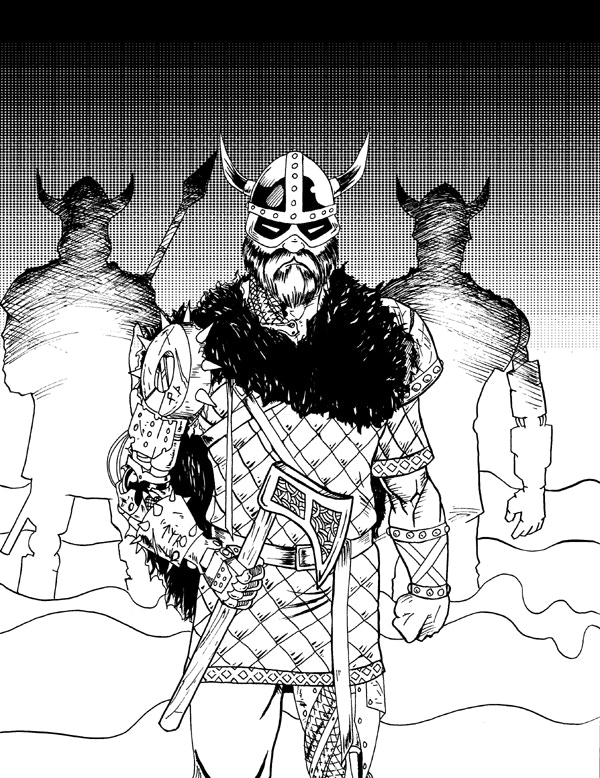 Half of the adventure takes place in the Volcano Dungeon Lair and the other half on a huge, Futuristic Spaceship which the Star Spawn has had "parked" above the planet unknown to anyone for the last 1000 years!
And I'm happy to report that it does exactly what it says on the cover and then some. There are plenty of weird and dangerous monsters, alien life forms, and a ton of stuff happening. You got ray gun blasting action, a mix of elements of fantasy, science fiction, dashes of Lovecraft, rude bits of fun and high weirdness. And its all laid out in such a way that this adventure will fit right into your favorite retroclone system. In fact the Secret Machines is designed to work with your favorite retroclone system. According to the Kickstarter:
This module can be played with the OSRIC(tm) system or easily adapted to Pathfinder, D20 System, Labyrinth Lord, BFRPG, Swords & Wizardry, Warrior & Wizards, etc or any fantasy role playing system you may want to use it with under the Open Gaming License v1.0a!
Because this adventure is designed in such an almost system neutral fashion, I personally think that with a little bit of conversion this module would make an excellent cross over point with the White Star rpg system and Swords and Wizardry. 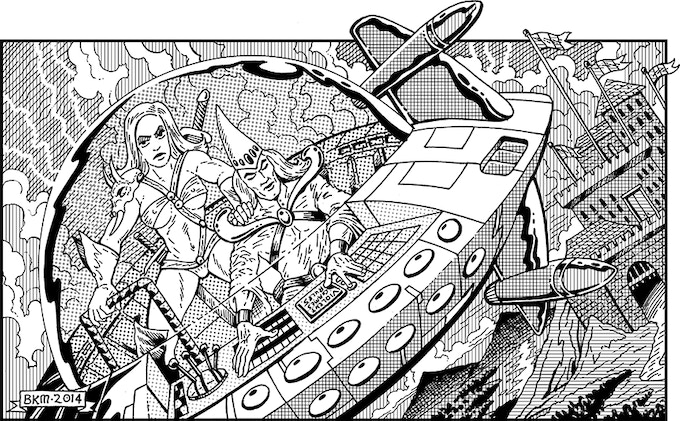 But I can also see this module working very easily with Dungeon Crawl Classics or for that matter with some adjustment Lamentations of the Flame Princess or the Astonishing Swordsmen and Sorcerers of Hyperborea. But due to the science fantasy elements of The Secret Machines of The Star Spawn this may be more of making adjustments for the relics and technologies found in the module. There are some nifty treasures and relics in the encounters that really bring the science fiction elements to life.
But is it good? I do believe with the right group that this is a perfect balance between Barrier Peaks style weirdness and a solid adventure grounded in pulp with lots of weirdness happening with its pages.
There are some very mature elements in this module so it might not be for the kiddies. Seriously there is some really deranged stuff happening in this one. 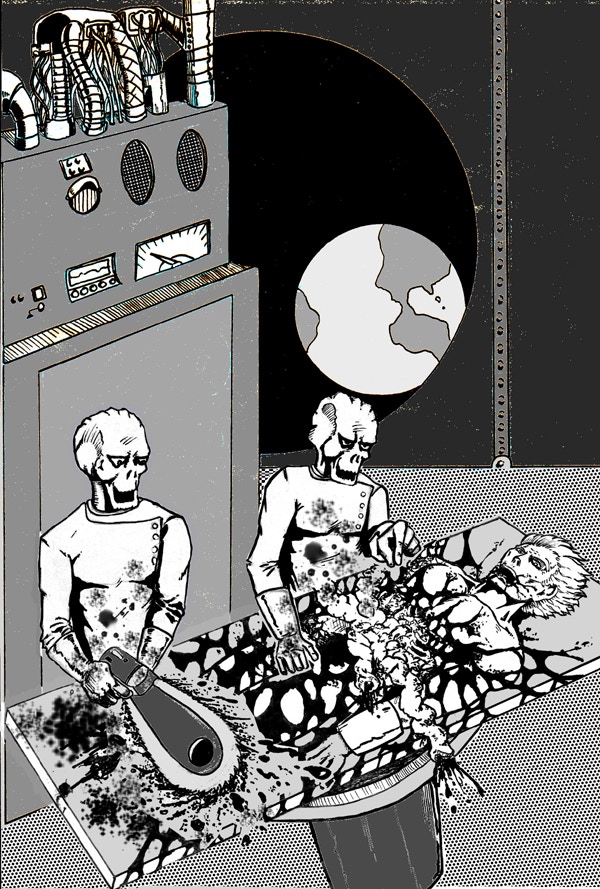 There are six new pre-generated characters but given the nature and tightness of some of the encounters in this adventure after looking em over, I'd use these guys as hirelings for the party or as NPC adventurers who have preceeded the current party of adventurers.
So bottomline do I think that this is a module worth your attention? Yes I believe so if your looking for a tight, well written, dangerous and completely deranged science fantasy adventure! There's lots here to recommend this one. And once the Maximum Mayhem Dungeon #2: Secret Machines of the Star Spawn By Mark Taormino hits the stands its going to bring some amazing elements of weird science fantasy to your tables.
And don't forget that  Maximum Mayhem Dungeons has another Kickstarter happening right now, go and check it out you won't be sorry. Right over Here
Posted by Needles at 12:22 AM