Nasty, dangerous, and completely ready to finish off anything that comes into their clawed and fanged purview. The sand rat is found throughout many different world,a pest of a bygone age when Atlantis might war fleets sailed the deepest depths of space and these little four foot tall horrors stowed away aboard the mighty void ships. Sand Rats are
a degenerate species of nasty and dangerous xenophobic and hate filled aliens. 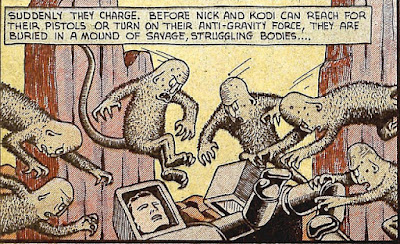 
They are territorial horrors who will work them selves into hate filled mobs of and attack adventurers en mass to claw,bite, and rip apart anyone or anything venturing into their lands. The sand rat pack can exist in a wide variety of worlds and adapt to many different atmospheric combinations. They attack just about anything or anyone regardless of intent. These creature's rubbery bodies protect them from falls, small arms fires, and some bladed weapons. These horrors crawl all over everything and cause untold damage to anything they can get their sharp claws onto. They have a highly acidic bite that adds +3 to all damage rolls enabling them to break down non organic materials when 'fresh meat' isn't around.
The sand rat frequently infests ruins, old barracks, Atlantian military bases, and think of all they survey as their own. They have a love of shiny relics and treasures, sometimes using gems and jewels to decorate their complex tunnel systems.
They hate all  intruders and have  been known to gather several packs together to bring down superior forces. The sand rat is far too clever to attack heavily  armed and armored foes. And use a variety of pack tactics and mob style ambushes to box in and separate parties of adventurers.
Posted by Needles at 12:37 AM