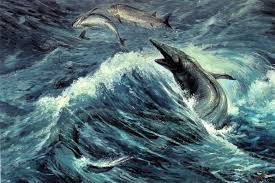 Now I'm no expert when it comes to the Pellucidar stories by Edgar Rice Burroughs but there are certain aspects of the author's works that pretty much grabbed me by my throat and still won't let go. I've seen Pellicudar described as Burrough's Middle Earth with dinosaurs,cavemen, and lots of weird bits. But its more then simply that, Pellicudar has its tendrils creeping through every single other creation of ERB. And its all connected in a weird Burroughs meta literature, shared world kinda way. Here are some of the lesser known Pellucidar connections:
1. The Gridley Wave according to the Barsoom Wiki: A method of communication, discovered by Earth inventor Jason Gridley, allowing for two-way communications between Earth and the worlds of Pellucidar and Barsoom. Used to transmit some of the later stories to Earth. On Mars, Ulysses Paxton transmitted a story to Earth via the Gridley Wave. It allows almost instant FTL communication between Barsoom, Pellucidar, and Earth. Yup that's right Tarzan, Paxton, John Carter, David Innes, and all of ERB's creations all exist within the same universe. And they interact over and over again with minor characters becoming the heroes in the next book in the series spurring on the action. A fact that a DM should remember is that there is no minor PC's their all. The hook is always baited to follow a thread in a campaign players will always provide the fodder! 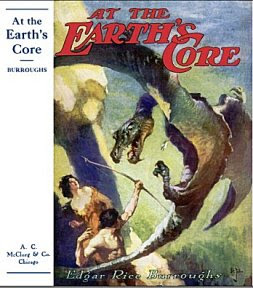 Another thing is the way that the meta underground world of Pellucidar hooks up with Skull Island, Caspak, The Lost Continent, The Island of The Unknown, etc. all through the routes and migration routes of the ancient dinosaurs. More information in the Door Ways To Pellucidar article .


2.The Reincarnation Cycle of ERB - Long before the Eternal Champion by Michael Moorcock, there was reincarnation related through Edgar Rice Burroughs works. Different characters echo throughout various novels and dovetail into and out of the ERB. This same style appears within the circle of writers who were friends and associates of ERB and Albert Otis Kline was one of these folks. The idea of reincarnation as motivator into adventure comes across in spades in The Moon Maiden and The Red Hawk books which has minor characters showing up in a post alien invasion Earth after the seeds of the Gridley wave give fruit to a bitter crop of moonmen and all because of the advances that Barsoom exchanges with Earth. Kline uses this same idea of dove tailing his characters in Jerry Morgan, Robert Gradon , & Jan of the Jungle . You can find a ton more about Albert Otis Kline right over HERE


3. Time as we know it and experience is not the same in Pellucidar, this makes for some very weird effects and psychics. According to The Time and Pellicudar article by Den Waldron the inner world may be not within our own world but part a net work of weird time warps and space effects. The article explains the rate of time in Pellucidar quite nicely: "Burroughs repeatedly writes that time seems to stand still in Pellucidar, that it seems to be subjective.
Thus, a person might step away from his village and wind up having all sorts of crazy adventures.   But when, after all those adventures, he finally returns to his village, he discovers that no one has missed him because he hasn't been gone all that long.   The subjective time experienced by the village is very different from the subjective time experienced by the adventurer.
It's an important enough feature of life in Pellucidar that Burroughs refers to it over and over, in practically every book.   He attributes it to the fact the sun never sets, thus, the cycle of days and nights which allows for circadian rhythms simply doesn't happen.


I think that there's an element of real life to it.   In our subjective existence, our perception of time seems to speed up or slow down in different circumstances.  Burroughs simply magnifies this phenomenon." 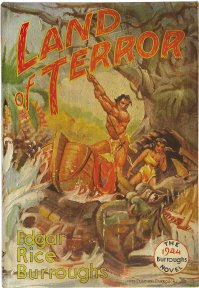 This sort of effect almost seems to arrest the cultures and cavemen that are found within Pellucidar something that is also reflected in the another Inner Earth Realm but this one is by TSR. The much beloved Hollow World shares not only the characteristics of prehistoric life and cavemen but another ideal. The author goes on to explain that perhaps all of these 'lost world realms' are pocket universes :
"On the other hand, this alternate ‘pocket universe’ theory still explains the proliferation of lost worlds that Explorers were discovering.   These lost worlds are all aspect or outliers of Pellucidar.  The only difference is that instead of being extrusions of the interior world onto the surface, they're points where the pocket universe has interfaced with our universe, creating perhaps a temporary gateway, a ‘micro-universe’ or left an ‘island’ in our world.    Professor Challenger's lost world, or Caprona, are little bits of Pellucidar that have extruded into our world and become sort of sealed off.   In turn, bits of our world keep extruding into Pellucidar, which is how it accumulates all those terrestrial species"
Further there is a connection with other so called lost worlds in the article:


"Any evidence for this?   Well, we can assume that extrusions into the normal world may have strange properties.  Compasses probably don't work well, navigation by stars or sun, becomes unreliable due to distortions in the electromagnetic spectrum.   In short, you'd see a lot of the weird phenomena that make places like Skull Island and Caprona so hard to find.
The extrusions or interfaces may not be completely in our world, so they may only be accessible by certain routes or from certain directions.   There may only be a few ways into Pal-Ul-Don or Professor Challenger's Lost World.   You might not be able to fly in by helicopter, or even see it by satellite photograph.   It would only be perceptible to our regular world by certain ‘windows.’   Again, this explains why so many of them seem so hard to find, or to escape.   Many Lost Worlds, particularly those in later works, including television and movies, don't seem to quite be in our world.   This includes the children's show Land of the Lost, or Acclaim Comics lost world out of time."
One clue that this might be going on is that in some cases there are signs of time proceeding in these lost worlds differently.   The best example is Zanthodon by Lin Carter, where the perceptions of time's being subjective are very similar to those in Pellucidar.   In Eric Carstairs of Zanthodon, we encounter a group of displaced German soldiers from Rommel's Afrika campaign for whom far less time seems to have passed than has passed in the outside world.
There are recurring hints in some stories of a ‘Rip Van Winkle’ effect for staying in these places too long.   Most visits to places like Skull Island or Professor Challengers Lost World tend to be short, so we wouldn't expect time distortions to be pronounced.  But every now and then we find a castaway who has spent a lot of time there, and quite often, there's something a little bit odd.


Of course there are problems.   For instance, why are the Lost Worlds invariably surrounded by physical distortions....  Mountains, plateaus, swamps, etc., and why are they often accessible by apparently physical connections... twisting caverns.   This makes it seem that the Lost Worlds are geological in nature, rather than interfaces with another continuum.  And for that matter, what exactly is Pellucidar's sun?   Our sun shining down into Pellucidar's continuum?  It's own star?  Something else?   Still, if we worked hard enough, these questions could probably be answered."


And for the record there is some very strong fandom evidence that there is a more then passing connection between Lin Carter's Zanthodon  and Pellucidar. In CALLISTO'S PELLUCIDAR  by Den Valdron there's a strong case made that either Zanthodon is a part of or other worldly echo or dimensional plane of Pellucidar. Well I'm going to go with the setting idea these lost worlds are all a part of some branched planar network of prehistoric lost worlds. Perhaps fitting together like russian dolls or as a net work of planes that intrude into the pulp or comic book realms as needed by DM's.
But there's one novel that actually uses the reincarnation elements further and is outside the mainstay of the ERB Pellucidar novels The Eternal Lover  summery can be found right over HERE
Basically according to wiki :A cliff-dwelling warrior of 100,000 years ago, Nu, is magically transported to the present, falls in love with Victoria Custer of Beatrice, Nebraska, the reincarnation of his lost lover Nat-ul, and the two are transported back to the Stone Age. The story is set in Africa, and the present-day sequences guest star Victoria's brother Barney Custer, protagonist of Burroughs's Ruritanian novel The Mad King, as well as his iconic hero Tarzan from his Tarzan novels.

The big cat that is talked about in the novel is referred to as a Ta - ho a Pellucidar term. According to World at the Earth's Center by Sean Philips :


"The Eternal Savage, Burroughs incorrectly describes a cave lioness as being “maned like her lord”. One inner earth tribe has learned to domesticate the ta-ho as companions and hunting animal, as two other tribes have done with the jalok and the tarag, respectfully.


This is the mighty cave-lion of Pellucidar. Scientist believe that the cave lion of the ice age to be the largest cat that ever lived, bigger even than Smilodon Fatalis. From cave –renderings of the animals discovered in Europe, it is almost certain that adult male cave-lions lacked 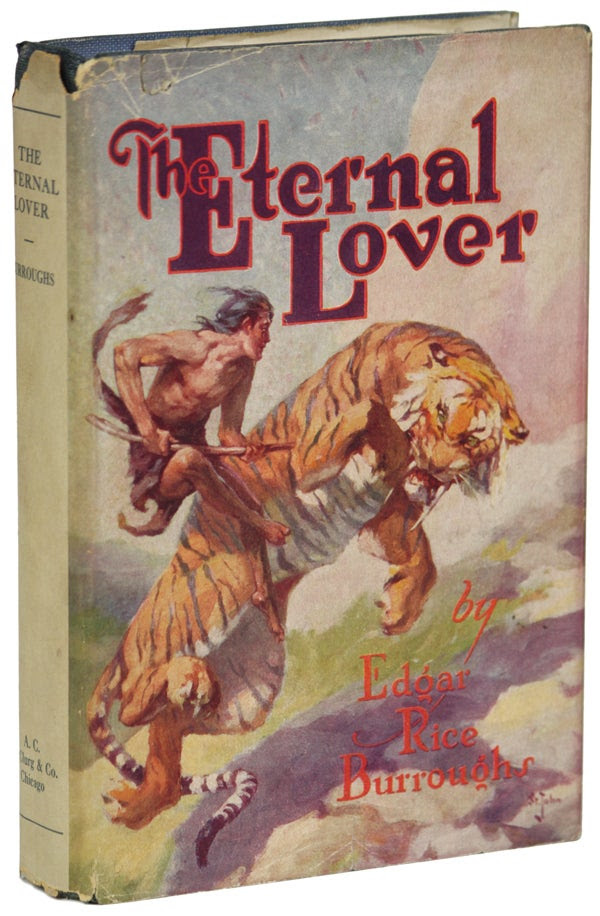 This sort of thing happens over and over again in the various Pellucidar novels which are as follows:
Posted by Needles at 10:12 PM