Remnant Guardians are demonic monsters from the Abyss made from the debris and jetsam found swirling across the planes of Hell and the Outer Darkness. These things are knitted together with damned souls in an unholy construct of insanity barely held  together with demonic 'improvements'. They stand at the threshold of reality guarding doors into places no one should go. They feed upon those who would trespass in such areas.
These pseudo demonic horrors can not speak but will telepathically gibber, moan can cause fear and confusion. They are often found bursting forth from closets,trap doors, and other places that they are set to guard. They flay about with wicked claws and often grab those that trespass into their domains. Such victims are dragged away to be devoured and have their souls incorporated into the insane morass of the guardian.  Many times remnant guardians appear at pre appointed times and places as the dimensional doors shift and planes align to allow these horrors temporary passage between worlds. 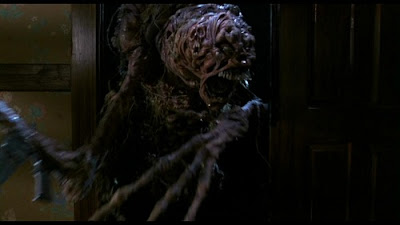 
Because of their demonic nature remnant guardians have minor demonic powers can be turned or rebuked as undead. They also take damage from weapons of silver and have many of the demonic immunities that come with dwellers in the Outer Darkness, immunity to electricity and poison, resistance to acid , cold and fire.
These things are also drawn to places of murder, death, and insanity. The ravages of the Green Death in Hyperborea has caused these things to appear with impunity in ruins, dungeons and other places of misery. Every twelve hundred years a tangle of these things will congregate in the Outer Darkness to mate and shed new remnants.  Their demonic masters the  Stitchers appear to construct and direct new horrors along the dimensional threads.
Remnant Guardians have been found in the wastes of Atlantandria and even in some of the post apocalyptic wastelands of other planes guarding the doors into other worlds. The horrors can survive for centuries in states of extreme hibernation and feed on whatever they can catch between worlds. The Remnant Guardians also love to feed on Drenches and the lowest of the low damned souls when they can't get fresh prey.


Using a series of special diagrams and costly alien artifacts totaling 200 gold pieces and one point of wisdom the caster of this horrid spell brings a guardian into his world by ripping a lesion like gap in the fabric of the local space time attracting the attention of these horrors.  The caster must have a human or humanoid sacrifice for the guardian. There is a 80% chance that the guardian will try to eat, drag away, or incorporate the soul of the summoner.  The guardian will guard the point to which it has been summoned for 1d10 years appearing and disappearing as its existence dictates.  The caster gains a temporary stable dimensional window into the Outer Darkness and the Abyss.  The guardian allows no harm to come to the caster should he simply gaze into the hellish sights but there is a price.  The caster will gain valuable weird and mind bending insights but may go insane for 1d30 days from the sights he's seen. Passage is possible but the guardian will try to seal the doorway after the caster enters. The Remnant Guardians are vicious, greedy, and hungry beasts at best and horrors with little to no redeeming value at worst.

This is a homage to one of my all time favorite guilt pleasure films House From 1986  not a trademark or copy right violation or challenge to the film  or the role playing systems mentioned in this blog post. All images found using google image search & belong to their respective owners no copyright or trade mark infringement is implied. This blog post is for educational & entertainment purposes only.
Posted by Needles at 10:59 AM