I'm still reeling with the passing of Sir Christopher Lee, no seriously this death along with a bunch seemed to come out of no place and pull the  rug out from under me. So I'm thinking about vampires and decided to play catch up with an old friend of mine's work. James Mishler and Jodi Moran-Mishler's Vampires of the Olden Lands is a pay what you'd like title Available right over HERE  . This pdf book comes from James Mishler's home campaign the Chronicles of Mhoriedh. 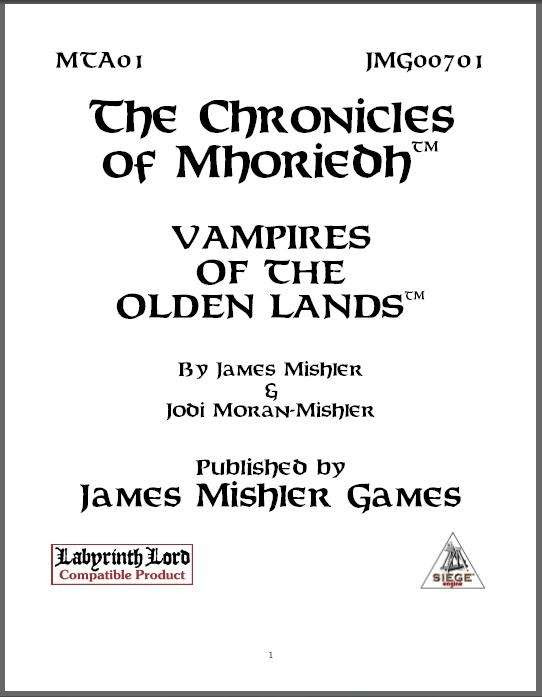 Oh sure, sure, you've seen vampire books before but this one is very different. It comes two very distinct direction to the issue of vampires. On the one hand these undead fiends are looked at from a distinctly sword and sorcery style direction. All the books in this series are dual stated with Labyrinth Lord and Castles & Crusades write ups. And everything is laid out with the dungeon master in mind, there is a one of the best approaches to the PC Dhampir in this book but the entire thing is laid out with the DM in mind. There's plenty of the usual mythology and legendary material here but this book presents vampires that have a distinctly edgy and completely dangerous aspect to them. Make no mistake these are the monsters of Hammer, horror, and myth. The blurb from Rpgnow lays everything out nicely:


Bhabaphirs – Soul-sucking child-slaying vampiric wise-women of the mountain villages that truck with night hags and liches;
Ekimmu – The Vampire Lords, founders of all the vampiric lines, masters of the High Vales of the Mountains of Blood, immortal spirits born of Chaos and Evil;
Lhamiras – Mothers of Monsters, the Vampire-Witches of the South who hunt men for sport and for game, dams of dhamphirs and lamias;
Lhamphirs – The Plague Bearers, the rotting husks of men and women who died of plague and now haunt the families and friends who abandoned them;
Mhoroiphirs – The Living Vampires, men and women who seek to continue to live their lives though they are undead, the classic blood-suckers of myth and legend;
Strighoiphirs – The Dead Vampires, mhoroiphirs who have moved on and fully embraced their undead existence and retreated from the world of living men to seek solitude;
Szalbaphirs – The Vampire Gamins, sad creatures born of horror, children transformed into blood-sucking monsters who seek an end to their undead existence even as they gather around them more of their kind that they create seeking solace and safety with siblings;
Vhukodlakhs – Vampire-Men, created as servants by the ekimmu in ages long passed, they now haunt the mountains and highlands of the Olden Lands, serving vampires and other dread lords as they prey upon man and beast alike.
We get an overview of these creatures with guidelines from one of the veterans of the old school hobby's pen's and it show. The organization here is one of handcrafting, the material is adapted to the author's campaign world but its done in such a way as to make it fresh, useful, and totally horrid to PC's health on a number of levels.
There's an element of old school horror and gravitas in this pdf that almost seems to have the author daring the DM to use these monsters in their own games and taunt's them to come back for more.
The author lays everything out in forty eight pages of sold work with elements of horror, a bit of humor and lots of style. Vampires of the Olden Lands knows exactly what it is and what its intended audience plans to do with these creatures and that's where the excitement of looking into the Dhamphirs comes from. The author knows his subject and knows that these monsters who are part man are intended as PC's and this version of the famous monsters are actually playable. This is one of the best versions of these horrors. And I intend to use them.
Could Vampires of the Olden Lands be used for other adventures and retroclones besides Labyrinth Lord? After looking into Vampires of the Olden Lands I can honestly say yes! I can see using some of this material for a game of your favorite space based old school campaign fun or even in a science fantasy setting as well. Such as the horrors of the sinking of Atlantis or something more akin to the Marvel vampire menace or something out of folklore and legend.
If one was running say an advanced Mutants And Mazes variation of Mutant Future I would turn to Vampires of the Olden Lands for fleshing out my wasteland vampires. Or since there is an element of almost comic book style madness lurking in the back of this book. I might tack this book on to the sweeping vampiric horrors of Astonishing Swordsmen and Sorcerers of Hyperborea. Do I think that Vampires of the Olden Lands is worth the download. Yes I do and then some. Serious this one of the best vampire books I've read in a very long time. Its well done, smart, savy, doesn't talk down to its audience and has a sweeping style that you will find very useful at your table time and again. Grab this one!
Posted by Needles at 10:04 PM