The Phaiano-phatu For Your Old School Campaigns


The Phaiano-phatu are an alien flying creature that are often found in hidden valleys, lost worlds, and as part of the facilities left behind by the Great Race of Yith. These  small and rather innocent looking creatures leap from tree to tree gliding over the primeval and prehistoric landscape but are in fact well developed predatory biological guards who will swarm over and devour any trespassers into their master's realms. The Phaiano-phatu are small bodied creatures with over developed jaw muscles and snouts capable of slicing through bone and flesh with easy. The send out two or three of their number to investigate potential prey and flank the prey then swarm them. All of the while telepathically alerting their masters to the intrusion to their facilities. These creatures live in great nest colonies and move with a grace  that belies their nature. 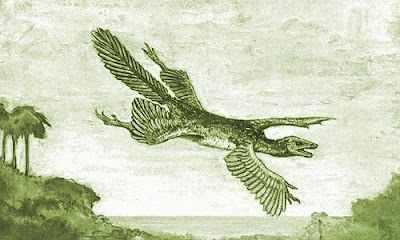 These monsters will often follow adventurers for miles watching for weakness only to swoop in a kill when they feel it is time. The monsters claw, scratch, and close with a lethal bite that is devastating. The Phaiano-phatu have keen eye sight and a well developed sense of smell able to pick up the scent of blood from over two miles or more away. The flocks have a low level hive mind like telepathy that allows them to coordinate with uncanny ability attacks, defenses, and hunting strategies against prey animals. They can take down prey much, much, larger themselves with a sense of viciousness and evil that is unmatched. They've been bred as guard animals and guardians of Great Race holdings and former holdings, a job at which they excel at and will continue to do for eons to come.

The Phaiano-phatu will try and box in prey while setting them up for an overwhelming swarming by sheer numbers. Their hive mind like mentality ensures that the swarm all get fed and not one drop of blood is wasted. The Phaiano-phatu assume a far less destructive role as individual low level carnivore when no intruders are present grooming the landscape and areas around Great Race holdings for both fauna and flora.
Posted by Needles at 7:17 AM