Simian Bats are a species of bearded  humanoid apes  that were uplifted thousands of years ago and have settled across the dimensional planes. They are a people's whose histories and cultures are drenched in blood. The Simian bats have acted as the hands and minions of warlords, wizards, conquerors, & tyrants throughout the cosmos. But in actuality they are a people while prone to chaotic behavior have a village society with complex social norms and a rich warrior tradition on the wing. 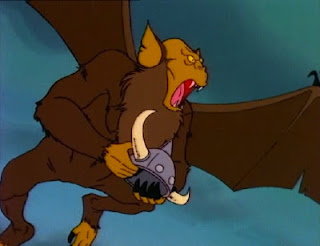 Simian Bats  live in troops numbering 1d100 individuals and their outlook on life can vary as much as humans. They gain +3 to strength, +2 to constitution, +3 on Dex, -4 on charisma in human societies, -2 Wisdom, and have a +3 to all melee attacks due to their claws and rapid attack methods. They have developed their own martial arts skills and arts based on flight and hand to hand abilities. Once per day certain mystic warrior types have a howl of fear which they are able to let loose upon enemies.
Because of their semi magick nature they have infra vision up to 40 feet and have a class C flight ability. Although they can use any melee weapons they prefer light weight and bladed weapons particularity pole arms. The simian bats intelligence vary from tribe to tribe according to genetic drift. Some tribes sport beards while others are far more robust strength wise. All like the ability to move unimpeded and only the lightest of armors will do, leather harnesses and leather vests specially created for their wings by the tribal leather and fashioners makers are the norm.
Simian Bats
Frequency: Uncommon on their world otherwise 'rare'
No appearing: 2d8
Armor Class: 6
Move: 12'' or 20" when gliding
Dex:8
Hit Dice: 7
%In Lair: 10% around their cliff side caves 60%
Treasure Type: C with some super science relics
No of Attacks:4
Damage: 1-4/1-4/ 1-4/1-8
Special Attacks: Howl of Fear once per day
Special Defenses: -
Magic Resistance: 10% semi magick nature
Intelligence: Low (upper)  to Very for leaders
Alignment: Any Chaotic but mostly neutral
Size: M  (6 foot tall)
Psionic Ability: -
Attack/Defense:-
Experience: 1000 each

The simian apes dwell in large cliff side communities and tribes with migration patterns often happening three times per year. Tribes have complex hierarchies within tribal society but local tribes often have adventurers and trade representatives traveling among local humanoid communities. The simian bat tribes have a complex metal working and stone craving capabilities often trade light stone and precision made metal tools. Traders often travel hundreds of miles with light cargoes of knives and trade tools to various points on worlds.Villages will be lead by 6th level head man or chief and a 5th level fighter adviser, these may wise women who have a shaman of 4th level or higher on call. Simian bat warriors and mercenaries are renowned for their bravery and ferociousness in battle. They have given the race a semi undeserved reputation as barbarians and murderers of the worst kind.These will always be led by a fighter of 6th or 7th level in addition to a shaman of 4th level who will do the negotiating for such a troop.

There are also simian bat berserks who are frothing frenzied warriors capable of cutting through ranks of enemies. They are possessed by spirits of murder and violence then let loose on enemies. They gain +2 to hit upon enemies and are let loose during battles of tribal importance and renown. These horrors are despised by the rest of the simian bat tribes and caged far from the rest of the tribes. These poor souls are fed by special handlers and volunteers and let loose during battle. These handlers must come to claim them after
the battles are over for friend and foe alike are often targeted.
Simian bat tribes are well regard as trade partners by those around them, the raider and warrior tribes are separate from the normal society. They are looked upon with a sense of dread & reserve as these often act as minions for wizards and the like across the dimensions. The simians bats are for the most part peaceful but these mercenary and warrior tribes will come to the defense of their 'lessers' as they look upon them should tribal nations as a whole be threatened. There have been simian bat wizards and the like but these are rare in the extreme. The race has produced druids, illusionists, and tricksters of all stripes as well as hunters, warriors, and brilliant fighters over the centuries.

This is a homage to one of my all time favorite guilt pleasure cartoons Dungeons and Dragons  not a trademark or copy right violation or challenge to the cartoon  or the role playing systems mentioned in this blog post. All images found using google image search & belong to their respective owners no copyright or trade mark infringement is implied. This blog post is for educational & entertainment purposes only.The simian bats originally appeared in the Dungeons and Dragon cartoon episode 'The Hall of Bones' where there were only scant details available on them. So over the years I've used them over and over in various campaigns. All screen grabs  in this entry comes from the


Dungeons & Dragons cartoon encyclopaedia website. And are used without permission