What is the 'Rocker' PC class? Well that's pretty easy to explain.
There have always been this weird set of sort of alternative realities where rock & roll was/is king and the party goes on forever surrounded by  the lights,drugs, three A.M. Pink Floyd  laser light shows, eternal fog machines and the galactic stage. Now add in a variation of the bard as interstellar or post apocalyptic PC class.  Add in new monsters and you've got the making the latest add on product  for the  White Star  retro clone rpg  system. Called simply 'the Rocker'  , this is a nine page variation of a new take on the bard with twists into some very daring, fun, and dark rock & roll  ideas. This product takes the rock and roll daydreams and Saturday morning cartoon ideas of yesteryear and brings them into a whole new direction with this PC class. For the slim cost of a dollar you get a complete class, new sets of monsters, and some twisted fun.Perfect for  taking your campaign in a whole other rock and roll school direction.
Basically this product take the White Star rpg system and adds in a fun, funny,and weirdly twisted take with the PC's being intergalactic rockers on a mission. That mission is up to you but it possibly involves those of you who are fans of such influences as   Subatomic Party Girls, Rock and Rule, Operation: Mindcrime, Buckaroo Bonzai, Gwar, Doctor Octagon, Silverhawks, Kidd Video, Limozeen, Metalocalypse, Ziggy Stardust, the original cartoon Jem, and the drug hazed memories of Josie and the Pussycats in Outer Space! 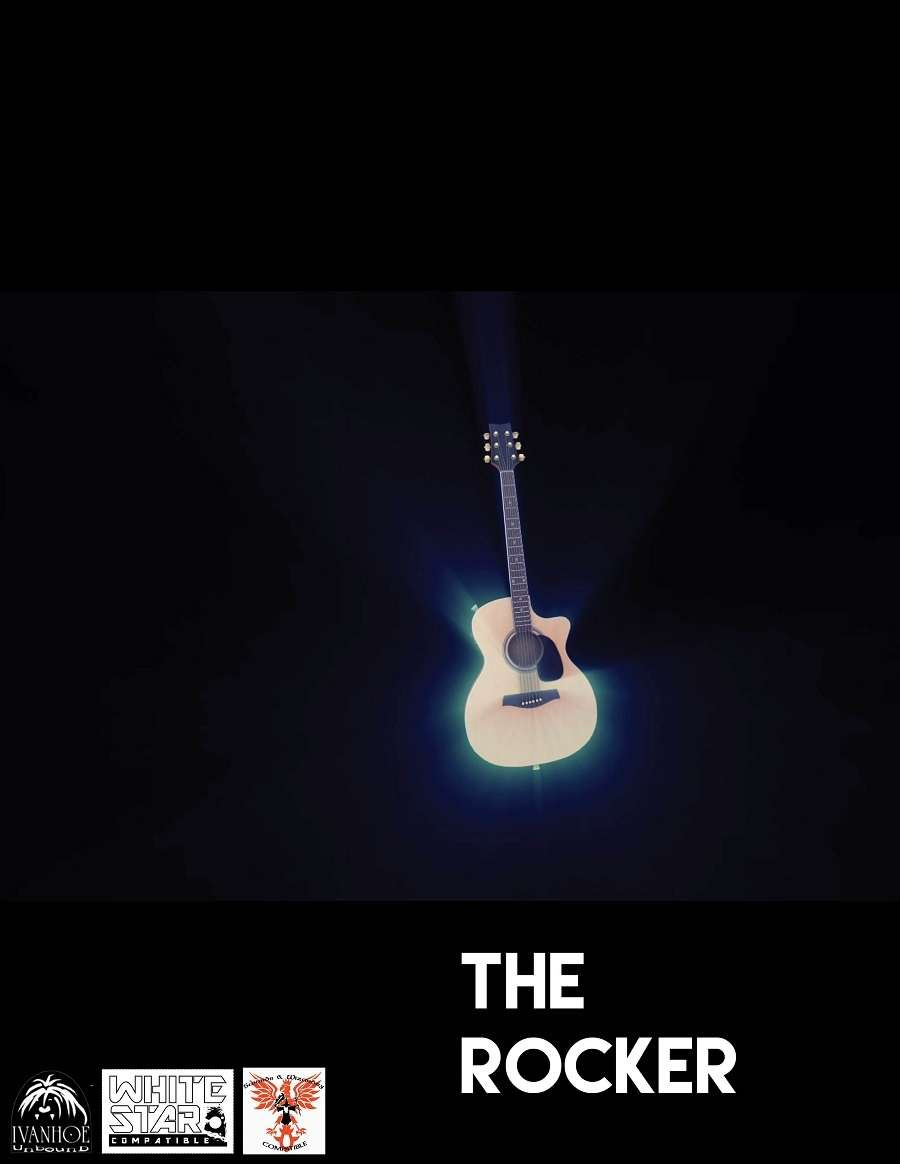 Grab It Right
HERE
So basically your playing intergalactic rock and rollers in SPPAAACEE who can influence crowds, deal with adventuring situations, and even gauge the reactions of the alien audiences your PC's deal with. This isn't the first time I've seen this sort of a campaign but the last time was in a post apocalyptic wasteland.  And this product adds in new wrinkles to the mix. But I've got to say something about the cover art.  I hate it. Seriously this title cover isn't going to grab anyone's  attention at all. I get what its supposed to do but it doesn't convey the awesome energy that the rest of the product evokes.
And in nine pages you get everything you need to set up a brand new style of a White Star Rpg rock and roll campaign. Well almost everything. The DM and players are still going to need a copy of the White Star Rpg.

This class introduces such things as the power to deafen a target, a Rocker can play a sound so loud and terrible that anyone within 100 yards without ear protection must save versus audio assault or be deafened for 1d6 turns. Groupies as a ninth level perk/power as well as an entourage  and the ability to establish a record label at ninth level.  etc. And yes there are saving throws to stave off those Satanic record label agents.
Yes, all of the usual rock and roll abilities and powers are in here and more. This begs for the DM to create venues and send those crazy rockers on all kinds of interstellar adventures in sleazy dives and alien concert halls  across the universe and beyond. This product echoes the golden age of  Studio Fifty Four dark side record agents & executives  mixed in with drug fueled Star Wars nightmares brought to a boil with Saturday morning cartoons. Adult cartoons in my case but you get the idea. This could easily be reverse engineered so that you could have your party of rockers appearing on some backwater science fantasy or Swords and Wizardry planet and wowing the crowd. There's even a table that has a random roll to allow the DM  to gauge the crowd's reaction at each venue. Modifiers for local religions, pitch fork wielding mobs and more are up the DM.
New monsters include Crimson Arachnids which I'm assuming might come from Mars, and what rock and roll band can't use a drum bot, Space Mummies are in there as well  who hate the sound of rock. Then we get Void Rockers a twisted and horrid philistine of the dark side whose given their soul to a Void Knight to be twisted into a very mockery of a horror of heavy metal proportions.
We live in an a golden  age of hand carved old school neo rpg products and The Rocker is a fine start on a complete campaign product. As an addition to the White Star universe of products this is a nice one. And its pretty damn well done for a dollar. Five out of five even if bards still suck the rocker is a really interesting addition to the crowd.