Forbidden Worlds was a fifty two page comic book fantasy/horror anthology that had some fantastic artwork,imaginative stories, and is mostly forgotten today except by public domain and pre code horror comic geeks like me and a wide audience of folks. According to Wiki, Forbidden Worlds was a fantasy comic from the American Comics Group, which won the 1964 Alley Award for Best Regularly Published Fantasy Comic. It published 145 issues between July/Aug. 1951 to Aug. 1967.
And this makes it perfect fodder for mining for old school gaming, and issue #2 from Sept - Aug. 1951 is a good solid issue to start. You can download this issue right over HERE 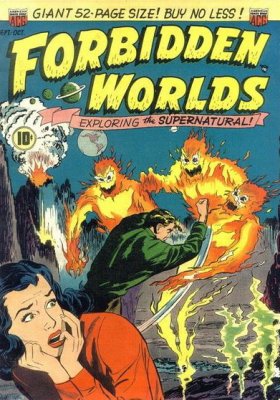 This issue starts out strong with the story the Mists of Midnight an tale of soul destroying horror in which a pack of spectral lords from the Ectosphere or the Beyond   decide to make life a living hell for Neil and Audrey when she witnesses a man being drawn back into the mists by these ghostly lords. These bastards scheme to drag down Audrey that she snaps and becomes a thrall and victim of these lords. But Audrey is fare more resilient to the machinations of these supernatural bastards. And through some fancy foot work manages to elude and ultimately escape these horrors clutches. Which brings up the point, if she finally escapes the Mists who else may run afoul of these horrors. That's where your adventurers are called in to make things right.
Post Script to Death is another tale with a really neat little gimmick that the DM can exploit for his own plans with the PC's.
The League of Vampires is played partially for comedy and part of the normal horror story. The progenitor of the story is simply a very nasty but very awkward vampire who might make an excellent NPC in your games. All in all its a pretty twisted little tale. But the Dead Man's Doom really has a nice brush with a creature that fits right into the background of a horror game. And there are some nasty elements in this one including a brand new monster from the depths to play around with your PC's.
True Witches of History is the sort of character that might fit in perfectly with a Lamentions of the Flame Princess.
Strange Staircase is a one line gag story with lots of potential if used in the proper setting. The Magic Coin is a mystic time travel tale with a weird love story, a bit of adventure, and magic item all in one. This is a great adventure for a party to get into the middle of. There's plenty of travel, some of this story would make a hell of an adventure into the past or an alternative world for your campaigns.
Uncanny Mysteries is a tale of a real ship with all kinds of horror and weirdness lurking in the background. This tale concerns the fate of the good ship Fellowship and her horrid fate. There's plenty here to mine and the Fellowship might make an excellent addition into a Spelljammer style of game.
The boy who talked with spirits is a low level story with NPC ghosts who make excellent adventure fodder.
All in all Forbidden Worlds issue two is one of those public domain comic titles that offers all kinds of possibilities for the DM to mine, use, and mutilate to their heart's content.
Posted by Needles at 11:06 PM