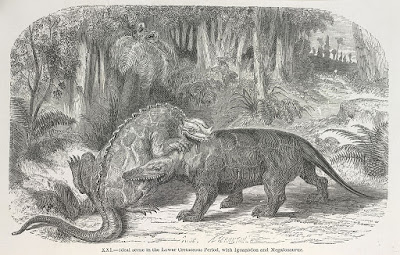 Found around the perimeters of the artificial biological and bio engineering laboratories of the Great Race of Yith. The hunting beasts are seventeen foot long powerhouse beasts capable of ripping a man in half almost instantly these creatures are often used to police and deal with the various biological and genetic experiments that their master's let loose within these park's jungle environments. These monsters are brutal, dangerous, and fierce monsters that hunt and kill with impunity with the bounds set out by their masters. But they are always telepathically subservient to the telepathic commands of the Great Race. They are heavy and fast monsters and attack with a vicious bite and claws upon their prey. The monster's body is heavily armored with thick scales and a very bad attitude. The hunting beasts have been found upon worlds and in dimensions still guarding Great Race ruins and strong holds for eons after the departure of their masters. The biological and genetic programming is strong that it has become instinct to these cunning and vicious monsters.
Great Race Hunting Beasts 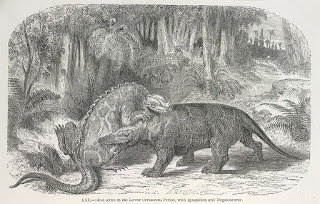 Frequency:Uncommon
No Appearing: 1d4
Armor: 5
Move: 15"
Hit Dice:7
% in Lair: 30%
Dex:8
Treasure Type: Found In
Location Being Guarded
No of Attacks: 3
Damage/Attacks: 1-6/1-6/4-16
Special Attacks: Nil But W/20% of Mutation
Special Defense:Nil
Intelligence: Semi
Alignment: Neutral (Cunning)
Size:L (17' long)
Psionic Ability: Nil (Great Race Telepathy)
Attack/Defense:Nil
These monsters use pack tactics in both their hunting and draw their prey into their circles for killing. The Great Race has used these monsters for centuries and these monsters breed true. They have ranges of over 200 miles with temporary dens throughout their territories. These horror often make their lairs around the ruins, locations, and holdings of the Great Race of Yith. They are often violent, dangerous, and completely without mercy to their prey. The hunting beasts kill for sport and often engage in 'games' with prey animals killing with a blood splattered passion that borders on berserk behavior.
Yet among themselves hunting beasts are quiet and patient animals. They have four to six pups per cycle and they have strong ties between packs identifying by chemical scents. These alien beasts are rough mix of warm blooded mammal, bits of dinosaur, and some simian genes as well as alien lineages know only to the Great Race of Yith.