Reading through Taskboy game's The Manse on Murder Hill is like reading through an EC or precode horror comic but its done in such an entertaining style that you forget that your reading an old school rpg adventure. This is the type of plot that you want for a low level party of adventurers, something exciting gritty and entertaining for you as well as the players. This review and commentary is for the updated as well as expanded adventure on Drivethrurpg 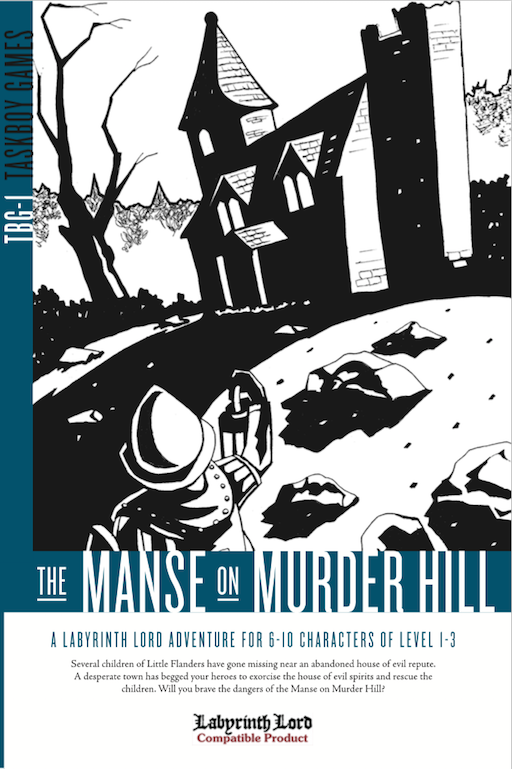 The plot is like something lifted right out of a pulp magazine, 'Several children of Little Flanders have gone missing near an abandoned house of evil repute. A desperate town has begged your heroes to exorcise the house of evil spirits and rescue the children. Will you brave the dangers of the Manse on Murder Hill.'
For a Labyrinth Lord adventure for levels 1-3 this product takes full advantage of every aspect of the dungeon adventure trope and has it twisted  into a solid direction that actually follows a nicely handled plot with goals, treasures, and gives everything you need to play in a two dollar product that is worth the money.
The artwork in the product as I've said in a past review of the product looks like it came out of a Hellboy comic and that's a good thing. The mood here is right in line with the swords and sorcery aspect of Little Flanders. You've got NPC's here that fit the local space, lore, rumors, and menace lurking around the corner. You've got places of interest, equipment, and high weirdness. Whist reading through this I was reminded of whiffs Robert E Howard's Solomon Kane, traces of Astonishing Swordsmen and Sorcerers of Hyperborea and bits of a low level Lamentations of the Flame Princess. The product oozes with atmosphere and weirdness in a low level sort of way that one generally doesn't see with products of this cost. There is a lot of quality here.
The PC's might wander where they will but this adventure takes full advantage of a solidly done investigation with full rounds of dungeon and location crawling in three spots or more. There is lots happening in Flanders and its on the level of a Twin Peaks meets Solomon Kane kinda vibe. Even though this adventure could be used with any sword and sorcery system including OD&D. And yet this is a straight forward adventure with plenty of action happening below the surface as well as on top. This product reminds me of at at least several old school fantasy comic books from the 70's with traces of late two thousands game design sensibilities and that's a good thing. But make no mistake, one wrong move in this module and your adventurers are dead meat. The second thing that I love about this adventure are the maps, handouts, and attention to details that the author has done. There's something very pulpy reading through adventure and seeing these. Its like an invite into the world of the adventure. And this is where The Manse on Murder Hill shines, the drawing in factor of this adventure.
For the Labyrinth Lord retro clone Manse on Murder Hill is a must. Seriously this is an essential adventure for the DM to have and its solidly done. But if PC's make mistakes your going to be dead meat.
Scattered throughout this product are three or more campaign hooks that could see the DM fleshing out the events of Little Flanders.  And to be honest while this adventure is designed and executed for Labyrinth Lord. I wasn't thinking of that game while reading it at all. I was looking thoughtfully over at   my shelf and contemplating Lamentations of The Flame Princess or  Astonishing Swordsmen and Sorcerers of Hyperborea for running this one .
Now there are several reasons for this and number one is the fact that Little Flanders could easily be tucked into the peusdo historical realms of LoFP with little problem, making it a perfect little local starting place for adventurers of the freebooter type.
For Astonishing Swordsmen and Sorcerers of Hyperborea, this is a nice and even low level starting adventure where you've got locations recovering from the Green Death and on its way back to the road of recovery but in dire need of adventurers. In point of fact I'd go so far as to say that besides the efforts of  Corey Ryan Walden. Manse on Murder Hill is great starting adventure for low level PC's with enough action, excitement, and engagement for your PC's for a very long time to come. Now with enough bang for your buck for two dollars, I'd say that this adventure could be adapted for OSRIC, Fantastic Heroes and Witchery, and other advanced clones but this might require some juggling with the stats and adventure elements & materials within this product but I think its well worth it.
In point of fact I'd go so far as to say that using this adventure you could take the location of Little Flanders and pop it right into a post apocalyptic isolated location and still have the action, flavor and adventure intact. To take this further with a little imagination you might have the adventure taken further afield into the  Cthulhu Dark Ages rpg . But then again that might be going to far a field for a solidly done and well written game adventure. The best one's spark the imagination and get the players and DM thinking in just that sort of way. Five out of Five in my book!
Posted by Needles at 9:26 AM