“Just after dawn, a village scout dashed from the forest carrying a wondrous, and perhaps even terrifying, story of a huge, circular shell with a door, a massive coiled building that sprang up during the night. And it is still growing … ”

"Whether from forgetfulness, mental blockage, or intrusions of the dread “real life,” every storyteller has probably experienced that sinking, not-so-prepared feeling before a game. This sourcebook provides a remedy for the next time that happens, and includes an adventure location that is both a little pre-generated and a little homemade, is immediately expandable and adaptable, and can be replayed without seeming like a re-run, because the building changes even as the characters explore it." 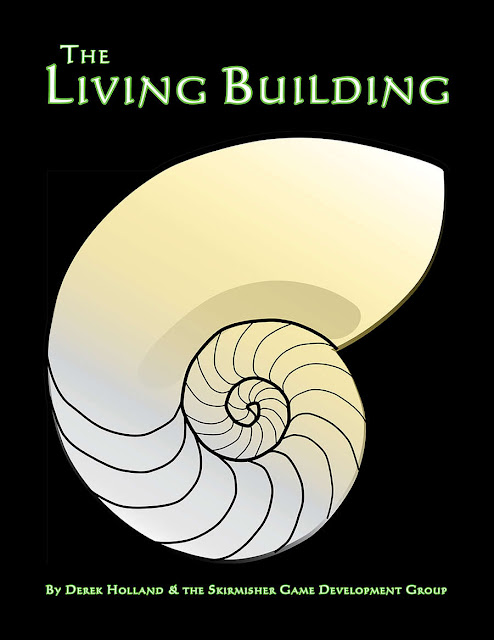 So I'm going be needed an adventure location for our upcoming OSR Science Fiction or Science Fantasy rpg campaign over the weekend. And it's gotta be weird, dangerous, etc. Here's where the classic Skirmisher Publishing's The Living Building By Derek Holland & the Skirmisher Group comes in.  The Living Building is a great stand in for a near human alien building especially for a B/X inspired OSR game. And that's exactly where the sweet spot is for our weekend games. But why?! Because Skirmisher has put in some time & effort for OSR  games such as Mutant Future.

And these conversions is where this Dragonfoot thread comes in really handy according to  Finarvyn back in July 2011 he says, " The answer to this is totally based on how well you take adventures from one game and use them in another. Can you take OSRIC or B/X D&D or S&W and use them interchangibly? If so, then you're in good shape for the editions of GW that you mentioned.
I think that in general 1E/2E and 4E are all extremely interchangible philosophically. All are very similar to old school D&D. (B/X perhaps.) Mutant Future is based on Labyrinth Lords, which is also similar to B/X D&D. All of these use quite similar mechanics, etc, and adventures for one can be used for another with minimal effort, in my opinion.

As long as you steer away from the oddball versions of GW (3E was based on the MSH colored chart, I think 5E was the one created for Alternity, the newest GW is written for D&D 4E) you'd be fine."
And to bring this back to the Living Building there's the entire building & it's contents all in one. This means that the DM has everything as it also includes the monsters as well. This makes the Living Building a snap to drop into your own OSR games.
And this is one of the best reasons to use 'The Living Building' by Derek Holland for alien adventure locations & according to Drivethrurpg reviewer Jason A.; "I was not expecting to get as much as I did from this book, buying it just for the novelty. But there is so much material in this book, each room giving detail and source for new items to be brought into my Gamma game, and room by room an easy way to organize the info. Imagine a structure growing from the ground, encroaching on a location, but with such wonders for your post apoc group, except something is wrong, it keeps growing and there are dangers the original builders never thought would be a worry to the original owners, but as a post apoc group, the things inside are strange and deadly. Good tables too, new mutations, and interesting monsters."
I'm going to adjust the mutant monster encounters, and the artifacts table for our humanoid near human alien colony that the players are going to be encountering. And  ' The Living Building' has everything that I need going into DMing this weekend. And this makes   The Living Building  perfect for Stars Without Number, Hulks & Horrors, and other OSR Science Fiction  games that use a B/X base.
Or   The Living Building  could be used with Siege Engine rpg games as well especially James Ward excellent Starship Warden rpg.  Still available through Amazon even though Troll Lords has moved on. 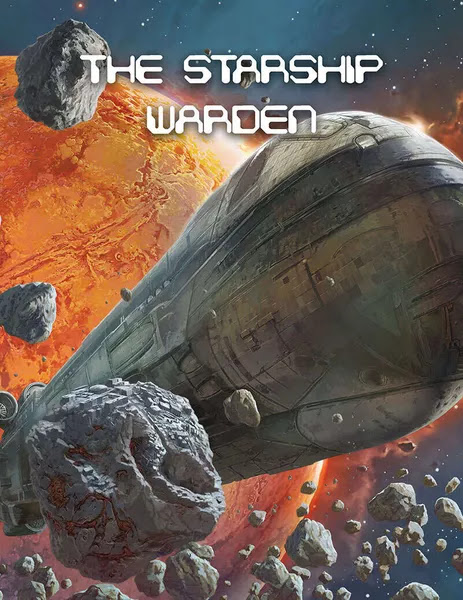 The Living Building  is a self contained encounter & works well as an unexpected adventure location that the player's PC's run into. All in all I'm glad to dig out this classic Skirmisher Publishing resource.
Skirmisher Publishing's The Living Building By  Derek Holland, & The Skirmisher Group For the Mutant Future Retroclone &  Gamma World Rpg Is Available Here
Posted by Needles at 7:37 AM