"Franklin is a subsector of independent worlds which, while more settled and established than Sequoyah or the frontier subsectors, is still not as tamed as Hub or Cascadia subsectors. Here you will find the alien artifacts of Tal'Kalares, the theocracy of Frankin, the military dictatorship of Minerva, the libertarian city-states of Bastiat, and the floating cities of Moffett." 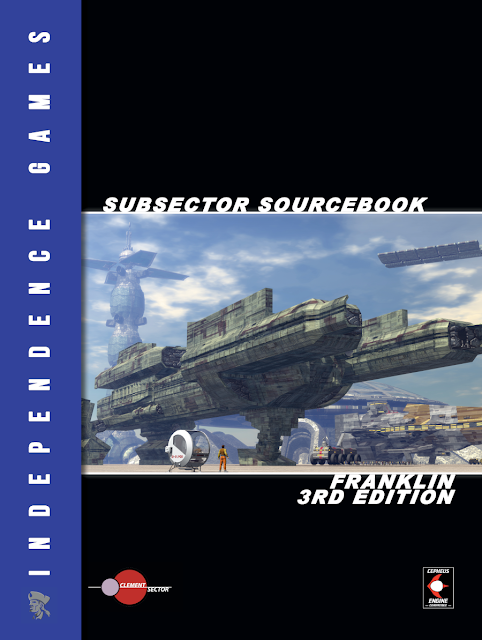 Each world comes complete with detailed information concerning the system and the planet itself, yet leaves the Referee plenty of room to use these worlds as they see fit."

Subsector Sourcebook 2: Franklin By John Watts, Kayla Lee, & Bonnie Dodson is one of those books you don't know that you need as a DM. Subsector Sourcebook 2: Franklin touches on the fringes of the Clement sector universe. This is one of those subsectors filled to the brim with opportunites for adventure. The book seriously is the outer edges of the interstellar map. And its filled with frontier edge planets & systems that will challenge even the most jaded of adventurers & spacers. These are the not quite wild systems that have lost touch with the rest of civilazation and like it that way. And it's this aspect that kicks up the Space Western & frontier aspect of the Fraklin sector.
The idea of the independant frontier is really well thoughtout with in the Franklin sector itself. The sector itself is boiling in some places & yet maintained in others we've got many different flavors  with  the alien artifacts of Tal'Kalares, the theocracy of Frankin, the military dictatorship of Minerva, the libertarian city-states of Bastiat, and the floating cities of Moffett. And they all offer opportunities for adventure serious deep long campaign adventures
There are plenty of places within the Franklin subsectors that can easily get PC's killed. And to put it into the terms of a Space Western. Franklin is the type of sub sector that represents the American indian lands where the PC's are the strangers within a strange land. Franklin is the type of a sub sector where the rules of law still apply but they might not be the laws that your PC's are familiar with. Franklin is where the deeper space expediation's get launched from. 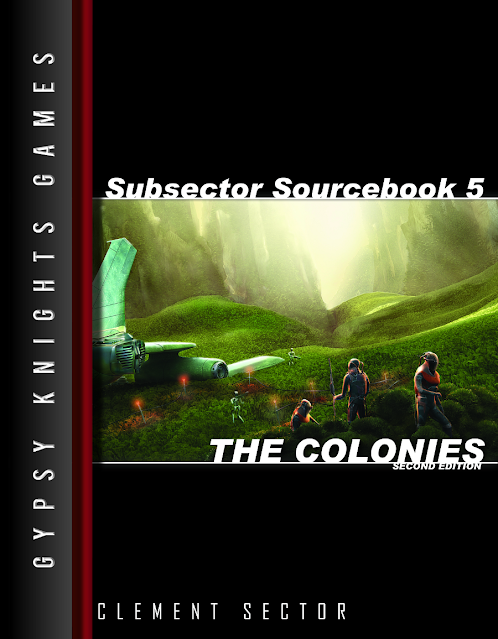 But since the collapse of the wormhole the whole subsector wants to keep its independence from both Clement & Earth. They have no reason to welcome thier interstellar parents back into their sphere of influence with anything resembling open arms.  They've had the taste of freedom & want to keep going. To touch the nerve of the matter the Franklin sub sector has no real reason to welcome outside governmental rule. There are sometings that should be strictly local affairs. And this place  is one of them.
The Franklin sub sector is embroiled between the instellar world that it wishes it was and that one it is. Franklin is of those sub sectors where the illusion of control hides the seething madness of the genre floating beneath the surface. Franklin is a sub sector with a powder keg aspect just waiting to explode! And it could be the PC's who kick off the excitement.
Is Subsector Sourcebook 2: Franklin Third Edition worth getting for the Clement & Earth sector rpg's or your 2d6 Cepheus Engine rpg campaigns?! In a word yes! The Subsector Sourcebook 2: Franklin Third Edition has all of the right bells & whistles. Its solidly done and has a ton of potential for a long campaign because of the way that it presents the various factions, and adventure locations. I'm really impressed with the Subsector Sourcebook 2: Franklin Third Edition book because of how easily it slots into the Clement Sectors rpg itself. There's ton of potential to add & modify Subsector Sourcebook 2: Franklin Third Edition to have a full realized campaign using this book. Its a good & solid addition to the Independence Games library of products!