"This is a near-future sci-fi/ surreal horror game inspired by the works of William S. Burroughs, David Cronenberg, William Gibson, and Clive Barker. The game setting is centred on Avalidad, a futuristic city in Morocco, where corporations have been conducting research in genetics, cybernetics, augmented and virtual reality, and biotechnology. By default, characters are expected to be ZoneSec operatives (a mix between law-enforcement agency and state police) or executives for Takeda Technologies (one of the most relevant corporations in Avalidad), but other roles such as Avalidad’s celebrities, fiscal royalty and seedy underbelly are also possible." 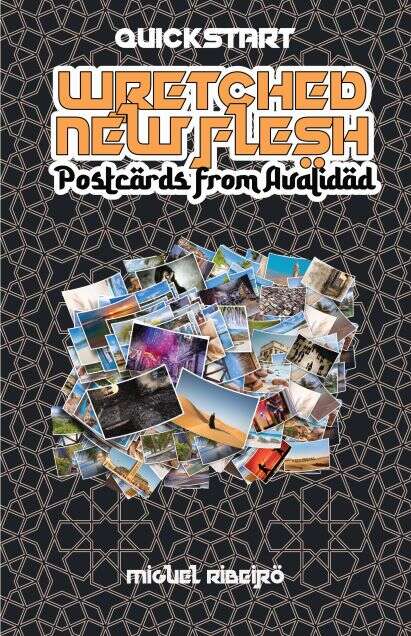 “in the magical universe there are no coincidences and there are no accidents. nothing happens unless someone wills it to happen”― William S Burroughs
Wretched New Flesh Postcards from Avalidad Quick Start, is such a place and it's a dangerous one.

And Wretched New Flesh  is an rpg that set's out to set the characters up in the world of Avalidad and does it so well & quickly!  And this is one of it's main draws for me as a DM. Get the players into the action in less then 15 minutes and start playing! And Wretched New Flesh uses the Wretched engine very well and the quickstart has all of the basics needed to get the PC's into the middle of the post Avalidad action well. There are all of the usual rpg elements for the PC's equipment, weaponry, the golden advice that the Red Room is known for. And more!
Because the Wretched New Flesh Postcards from Avalidad Quick Start Rpg is OSR it's easy to get the experienced players & the beginners into the mix of a basic game right off the bat. The whole package is well thoughtout & has a very solid mix of rpg elements thrown into it.