James Mishler Games produces some excellent supplements Fairies Fair and Foul Vol. 01 By James Mishler, & Jodi Moran-Mishler From Mishler Games is no exception. This product runs the gammit from fairies of sorta good strip to Fey born straight from the nightmares of peasants. 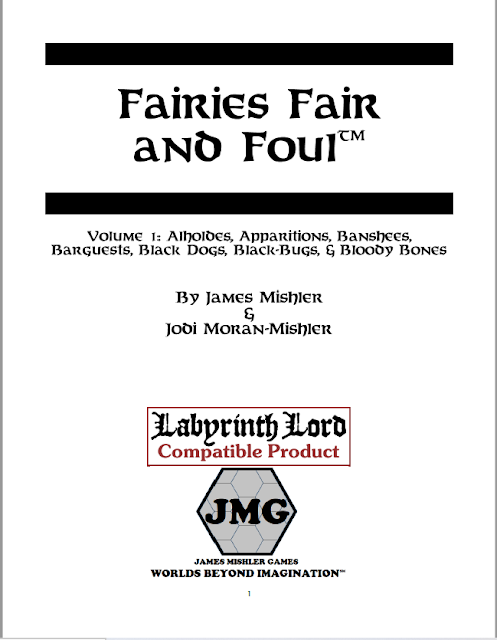 Fact is that Fairies Fair and Foul Vol. 01 By James Mishler, & Jodi Moran-Mishler From Mishler Games has a solid inclusion of monsters scattered among the Fey;
"The fairies included herein are not necessarily based on myths and legends, taking merely inspiration from the name and possibly inspiration from myths and legends. Some are created from whole cloth, much as many of the names of fairies in the Denham Tracts most likely were.

Rest assured, they will challenge your players with new and interesting encounters!

The Alholde Fairy – A household fairy who only the rich and powerful can afford.

The Fairy Apparition – A creature literally born of fairy nightmares!

The Banshee Fairy – Wicked fairies all too… keen… on avenging themselves on all other life!

The Black Dog Fairy – Guardians at the crossroads between the Fairy and Mortal worlds.

The Black Bug Fairy – Mortals should be careful when they wish upon a star, as they never know who might be listening…

The Bloody Bones Fairy – These traitorous fairies have lost their heads… but a little setback like that would never stop them. Just don’t lose your head when you encounter them…

Seven new fairies – Mostly wicked and foul, in this run."

Each of these seven Fey has both a benefit & bane attached to them in  Fairies Fair and Foul Vol. 01. These Fey have this dual side to them which makes them more then simple monsters & pushes them into the realm of NPC's. This makes them very useful for both old school & OSR games, take for example Lamentations of the Flame Princess where  'Fairies Fair and Foul Vol. 01' could be used for something completely different as an adventure pivot point.
And for a game such as Adventurer, Conqueror, King rpg  Fairies Fair and Foul Vol. 01 could add in some very different elements when a Fey such as these is in control of a certain domains & areas. Some of these such as Fairy Apparition could become a real problem for a ruler or even a thieves guild as they make an area completely off limits to a gang of outlaws. Other Fey such as the banshee fairy could become a force of vengence against an entire royal line or even a wizard's family.
For Castles & Crusades  Fairies Fair and Foul Vol. 01 are perfect for the sort of adventure fodder that players would not be expecting. This is especially true of the Black Bug Fairy which could if used correctly could make a party of adventurer's lives a bit of a Hell with a small 'h'. This thing has all of the hallmarks of a min teir Fey encounter that is both horror and humorous applications. The Bloody Bones Fairy is another Fey that could become the focal point for an entire series of adventures encounters. These Fey have some very dangerous abilities that they can bring to play.
Another Fey with numerous applications is the Barguest Fairy which could become the center point of a family curse adventure or other supernatural serial murder style adventures. A very dangerous Fey if used right. For the price  Fairies Fair and Foul Vol. 01 brings great value to the table as fodder for both your OSR or old school campaigns.