Three Shops article by Jeff Bowes art by Del Teigeler is a really solid little addition to the AD&D 1st edition  or OSRIC rpg campaign.Jeff Bowes really knocks it out of the park with this short eight page businesses that can be dragged & dropped into your ongoing campaigns. 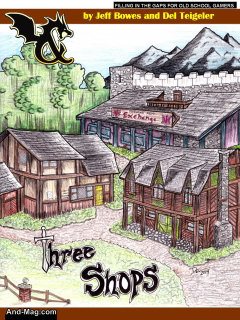 Del Tigler knocks it outta of the park with his three dimensional cut away maps of the businesses. Proudfoot and Archer finder of lost objects and are literally a throw back to the 40's and 50's private detective film but these guys are perfectly suited to OSRIC; "Proudfoot and Archer are finders. Despite the fact that the city has a large, well-organized City Guard there is still a need for private investigative work. In general they concern themselves with recovering stolen property, the protection of property and finding missing or hiding persons." The NPC stats are well laid out, the adventure hooks write themselves, and the business works well; "The owner of the shop is Rorie Archer, a middle- aged balding Halfling. In the past 5 years Rorie brought on the Halfling adventurer Sam Proudfoot as a partner and his business has blossomed. Sam is much younger then Rorie and still engages in the adventuring life. A combination of his natural skills and enthusiasm has made Sam an excellent investigator. Due to Sam's reputation customers frequently insist on his involvement. This is something of a headache for Rorie." You've got details well laid out with Jeff Bowes going into each business solidly and giving reasons for said details.  And then we get into Northwind Arms Exchange - a precious goods exchange which is part coin exchange, part pawn shop, and part adventurer shop;"Norwind Arms Exchange Precious goods exchange. In most towns of reasonable size transactions must be carried out in the local coinage. Often towns have Laws governing how many foreign coins can be carried within the Town Limits. For this reason there are a few moneychangers near the Town Gates. Norwind goes beyond just changing coins, they will also purchase gems, jewelry and some objects of value. Owner: Anton Kaiden a member of the local Norwind Merchant house. Anton is a portly man of 46 years with close shaven grey hair. Anton married into the Norwind Merchant house and received this position from his unimpressed father-in-law." The fact is that Jeff Bowes goes into staff, layout, adventure possiblilities, hours of operation, customers, & more. Finally we get into 'The Roving Eye Tavern' which is part adventurers tavern & part retired operation for a family of adventurers. But there's far more to 'The Roving Eye' then at first it appears; "The Roving Eye Tavern The Roving Eye Tavern is a small tavern on the Town's main market square. Although a two-story building, only the lower floor is a tavern open to customers. The wooden sign above the door has the shape of an eye carved in its center. Faded red paint clings to the wood. Beneath the eye are two crudely painted legs. Owner: The tavern is owned by the Conwon merchant family but managed by Genin Moorwalk. Moorwalk manages the Tavern with little interference from the owners. Moorwalk is a retired merchant in his late forties. Moorwalk is heavyset and is generally found behind the bar or mingling with patrons wearing a stained apron. He has a wisp of grey hair above his ears and a bald head." You really get a sense of these three businesses from the bottom up and get a real sense of the potential for your own campaigns in 'Three Shops'. Is Three Shops worth the download?! Oh Hell yes!