" Even dragons flee when they hunt...

One of the bogeymen of the Arduin mythos is revealed for you today! Ibathne are uncaring, deadly predators that haunt areas, stripping them clean to barren ground. Luckily for us they are pretty rare!" 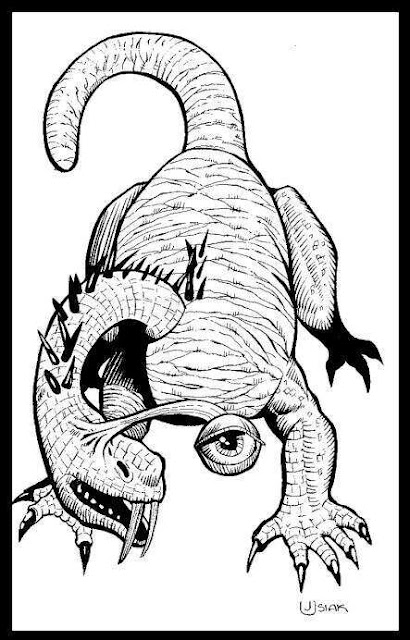 "These behemoths think nothing of munching on a brace of Wyverns or dinosaur for lunch and are too stupid to back down even when they tangle with something too much or too smart for them. The down side is they don't know when to quit: often fighting well after their death!"

Bloody, Bloody, Arduin's Arduin Monster spotlight: Ibathene By Dave Hargrave is an eight page adaptation of one of Dave Hargrave's iconic & god level monsters. Ibathene are the behemoths of Arduin that can clear the land of dinosaurs, wyvern flocks, and even mid level ancient dragons. These monsters make up for their lack of intelligence only with their incredibly dangerous biologies. The Ibathene is a 'sorched Earth' monster that is able to take down almost anything that runs across it's path. And these things are campaign ending threats only gods or a party of demigods has any chance of dealing with the threat of a Ibathene!
Now over the years back in the Eighties my uncle would threaten our group with various monsters but only once did we ever run into the destruction that Ibathene caused. The land where an ancient dragon was supposed to reside was scortched & blighted. The water table in the land was fouled as the once beautiful wilderness was now a wasteland. And we heard the roar of this horror! And we literally ran back to the safety of Arduin proper at the time.

And we heard that the veteran's game that my uncle played in on a Saturday night faced down this thing. Baring in mind that there were nine veteran players most of them ex military veterans. If you own the Arduin trilogy book collection then I don't know if you really need this article. But if your looking to use Ibathene as the central focus within the context of a campaign ending threat then this might be solid addition to your Arduin collection. 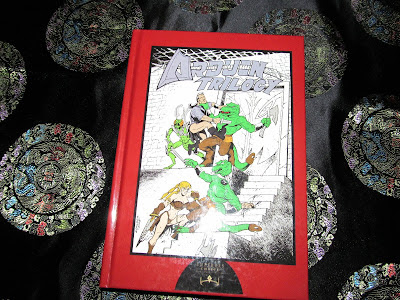 Ibathene are horror that eat sentient dragons for fun, food, and because they can. The Ibathene isn't intelligent in the traditional sense but a hate from old. These creatures have come into campaigns through Nexus Gates. And they don't stop until a terrority is a complete wasteland.  The Ibathene almost seems to be a bio engineered weapon of mass destruction created to destroy any creature with relations to draconic kind. These monsters are not be taken lightly at all and should be used with caution before being dropped into your old school campaigns.

So where could the Ibathene By Dave Hargrave be used?! Well these hellish abominations could be used in a post apocalyptic campaign with little problem so Mutant Future could host one or two easily. Carcosa could hold one of these monstrosities with little problem. But for a world like Greyhawk or the like  Ibathene is a campaign ender easily. A pair of these could chew through the Forgotten Realms like a cancer.

You get stats, ecology, and a good general overview of the Ibathene within Arduin Monster spotlight: Ibathene By Dave Hargrave. And for eight pages this gives the dungeon master all of the ins & outs of the Ibathene.