Now here's yer chance fer a rollickin' good time out on the rolling waves of the high seas! Don yer bandanna and tie on the old eyepatch ... fifteen men on a dead man's chest! Yo-ho-ho and a bottle of rum! Make 'em walk the plank, me hearties!

At last, Theives' Guild has gone to sea! Here are complete rules for designing and sailing ships, for sea chases and bloody boarding actions, and what's in the holds of the wallowing merchantman you just overhauled and captured." 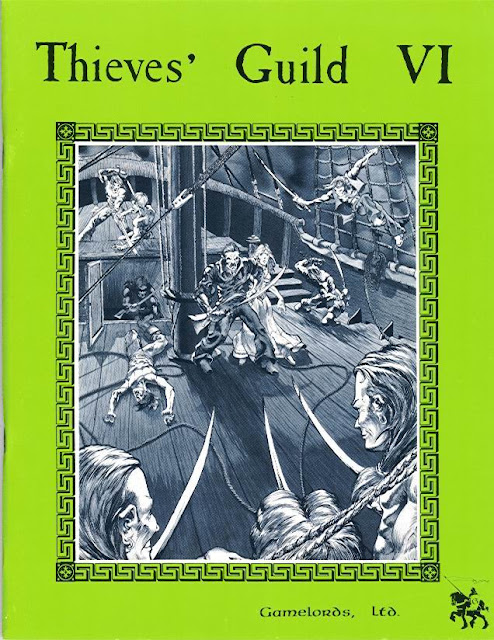 "And ... lots of encounters at sea!! Ships by the score! Broad-beamed merchantmen loaded with luxury merchandise bound for exotic ports in faraway lands, or wondrous treasures to enrich the coffers of powerful empires! Slim deadly warships, to guard these golden argosies, or to seek freebooters out in their own lairs and put an end to their larcenous careers! Even fellow pirate vessels, to sail with at sea or to sail on!!"

Merpeople, herds of whales, world-lashing storms, exotic uncharted lands, omens of disaster and great good fortune, even sea-serpents will be met in the pages of Thieves' Guild's latest trimph.

Error Flynn never had it so good!!!"

Thieves' Guild VI By Kerry Lloyd, & Richard Meyer is another one of those titles from 1982 that tackles the choice subject of pirates & sea dogs.  And Thieves' Guild VI does it's job quite nicely with gusto & old school sea borne weirdness. If your looking to add in a bit of old school piracy & sea dog borne adventure to your campaign then  Thieves' Guild VI might be a good option. Remember in Thieves' Guild VI it's still all about the thieves!
Here's what we've recently done this past weekend. Used Thieves' Guild VI to add in details on the operations of the Alchemist ( the undead power behind) the events of U1 The Sinster Secret of Saltmarsh. 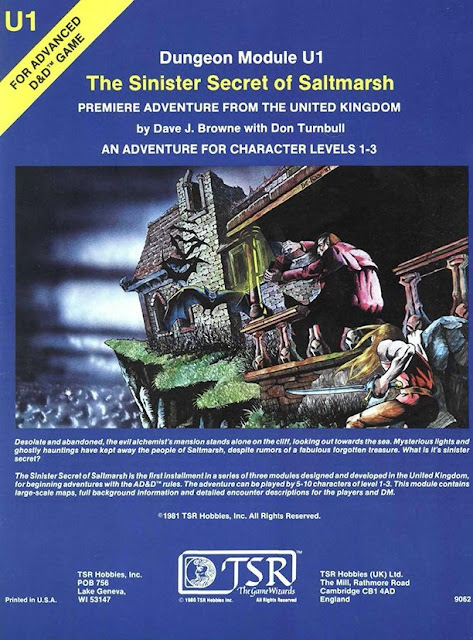 Thieves' Guild VI By Kerry Lloyd, & Richard Meyer contains everything from random sea borne encounters to named ships as well as everything inbetween to get a piracy fueled campaign off the ground. So do you need old school stats for an sea monster? Covered! Need a polar bear' stats? Covered! Need random rival pirate gang ships to try and destroy your party's PC's?! We've got those as well as an entire ocean as well as ports?! We've got you covered!
And all this makes  Thieves' Guild VI an excellent book to do a Castles & Crusades pirate campaign straight off! This is perfect to add in background to the fresh water cargo smuggling sugggested by U1 Sinister Secret of Saltmarsh! 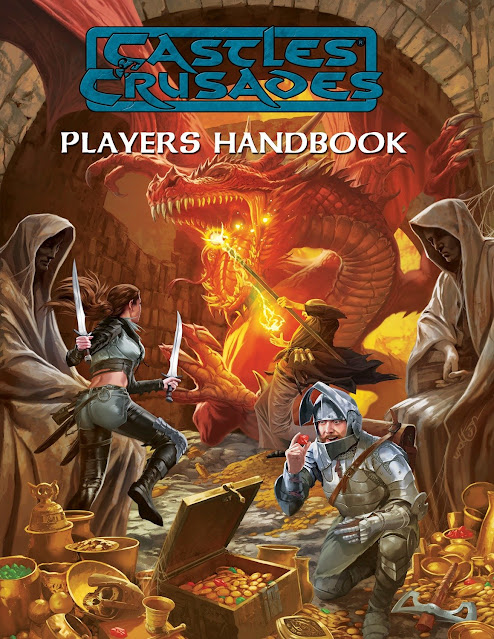 And all of this set's our PC's up for the adventures of the 'U' series where in human eyes have been watching them from the deep oceans & nearby saltmarshes. Is this is perfect set up?! No but it lends weight to the smuggling operations of the 'Sea Ghost' & it's attendant secret organizations.
Posted by Needles at 2:50 PM