"The legend of Mmatmuor and Sodosma shall arise only in the latter cycles of Earth, when the glad legends of the prime have been forgotten. Before the time of its telling, many epochs shall have passed away, and the seas shall have fallen in their beds, and new continents shall have come to birth. Perhaps, in that day, it will serve to beguile for a little the black weariness of a dying race, grown hopeless of all but oblivion. I tell the tale as men shall tell it in Zothique, the last continent, beneath a dim sun and sad heavens where the stars come out in terrible brightness before eventide."
"Empire of the Necromancers" By Clark Aston Smith (Weird Tales, September 1932)

Is there any other tale such as "Empire of the Necromancers" By Clark Aston Smith (Weird Tales, September 1932)?! No, the curtain is raised on our two necromancers from Naat who go about setting themselves up as the two kings in the mighty graveyard of an abandoned city of a not so forgotten empire. According to the wiki entry on Zothique the breakdown goes something like this; "Setting: The city of Yethlyreom in the realm of Cincor. Characters: Mmatmuor and Sodosma, necromancers; Illeiro and Hestaiyon, dead emperors of Cincor."
The undead in CAS's Empire of the Necromancers are both ancient rulers & victims within their own realm. And it's the perversion of the state of undeath in this story that highlights the complete violation of the  dead emperors of Cincor. And it speaks volumes of the nature of Zothique itself as a setting. 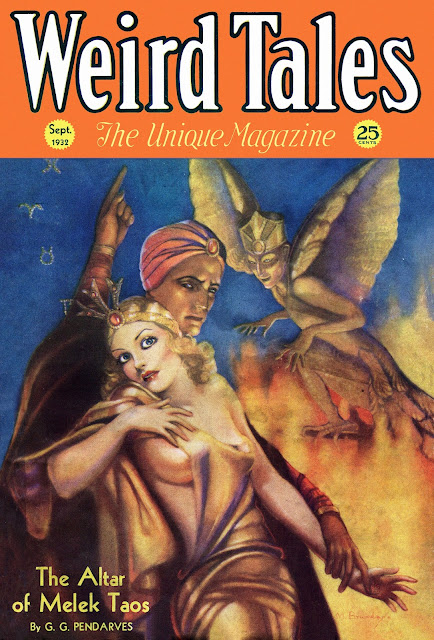 "Empire of the Necromancers" By Clark Aston Smith could be used as the basis for a Hill Canton's style point crawl where the PC's are hot on the trail of the necromancers after their dirty magicks in the wastelands of Zothique. Learning of their dark fate only seals the deal for the PC's. Because they will only have hints & rumors to help piece together the two necromancer's fates. There may indeed be treasure but would it be cursed by the dead emperors of Cincor themselves?