OSRIC came out in 2006, and it's use at the table top is a God's sent allowing the DM to create their own table top adventures & supplements. And OSRIC  also allows the DM to transcend the Advanced Dungeons & Dragons Player's Guide, Dungeon Master's Guide, & Monster Manual all in one at the table top level. All of these references are there at the DM & player's finger tips. 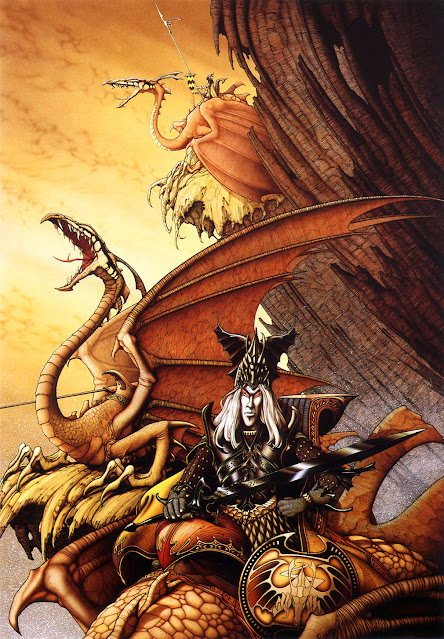 This thread picks up right from this blog post from the other day here. So let's talk about the  Melniboneans whose alien & very primal ways get a solid from the Knights & Knaves forums here.  And it was Geoffrey's canon that has me thinking over about the classic Michael Moorcock stories:  "My "Elric canon" is pretty short;

And its really Grodog here that I agree with; " grodog » Tue May 14, 2019 7:23 pm
I tend to think of Melnibonéans as earlier "generation" of AD&D elves---they're more atavistic/primal, closer to Faerie (in this case the Unseelie Court, of course!), and more tainted with Chaos in comparison to modern-day AD&D elves. Modern elves would likely be seen as some debased Morlock-like freak, if they were acknowledged as relations at all.

" Of course this brings in the fact that the  Melnibonéan tribes may be far more common then at first it appears. There could be other  Melnibonéan sorcerers scattered along the planes that never got the message about their ancient homeland ending.
And the odd Melnibonéan sorcerer will be right at home within Clark Aston Smith's Zothique. These thoughts go back to Guy Fullerton's threads on the Knights & Knaves forum. Fullerton's been playing with this idea for a long time as he's got a Moorcockian Sorcerer class here.  As was said this isn't anything new & goes back to 2015. And it's perfect for Clark Aston Smith's Zothique and Smith himself describes Zothique in a great letter breakdown according to the Zothique wiki entry; "Clark Ashton Smith himself described the Zothique cycle in a letter to L. Sprague de Camp, dated November 3, 1953:

So using OSRIC to recreate a Zothique style campaign setting isn't only possible but it might be easy to drop in a whole tribe of Melnibonéans and no one is going to be the wiser. 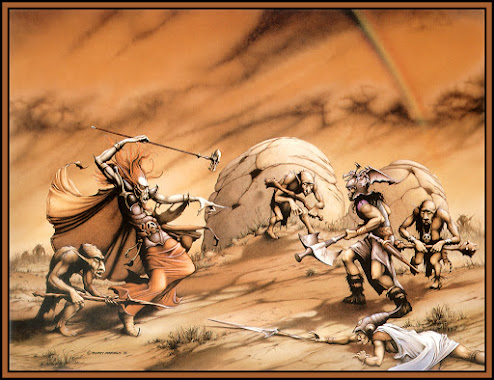 More artwork by Rodney Mathews used without permission that captures in my mind the weirdness of Zothique.

OSRIC is perfect for a Zothique one shot because of it's flexibility & it's easy of rules for players to grasp. it makes sense then that these rules could be twisted to Smith's world & yes I know about the Free D20 Zothique pdf here.  And we'll be diving into how this applies next time!